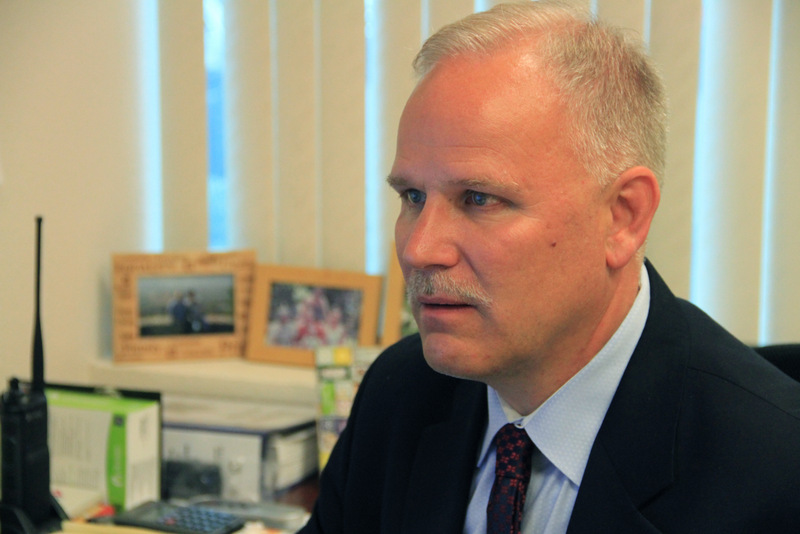 Posted at 17:50h in Neighborhoods by Pulse Editor 0 Comments

Richmond Pulse: Vehicle thefts and burglaries are down from last year. Why are these types of property crimes decreasing in Richmond?

Chief Magnus: I wish I could tell you that there is an exact cause and effect to it. Unfortunately that’s what makes the job so difficult, because it is so hard to attribute any one cause. But I do think there are a lot of different factors. We have worked hard over the years to engage the community in a partnership with us to report crime, to report suspicious circumstances that could be crimes in progress, things that merit a closer look. We have also worked to support neighborhood watch and neighborhood association groups, to put an even greater focus on crime prevention. We do a lot of engagement around helping people look out for each other, so we spend a lot of time talking with people about the point of getting to know their neighbors, about securing their homes and other property, about how we can basically take better care of each other and work together more effectively to reduce crime, and I think we are seeing some of the dividends from that.

RP: “Predictive policing” is one approach the police department has taken to preventing property crimes. What does that entail, and why do you think it can work in Richmond?

CM:  It’s just one more tool to help us use the resources that we do have more effectively. The whole idea behind predictive policing is that you look at where crime has occurred in the past. The underlying thought with predictive policing is that criminals are creatures of habit, and they tend to go back to the areas where they have a higher level of comfort — a neighborhood, perhaps, where they have already committed a crime, or a neighborhood they might even live in themselves. We try to use the data that we collect from calls of service and from reports that are taken, [which get] processed through an algorithm that was developed… to make predictions, based on time of day and location, for what areas might be vulnerable to certain types of property crime.

Officers on the day shift might have anywhere between 3 and 5 small boxes the size of basically a square block, that they are asked to go into a couple times during their shift, and get out of their cars and walk around; just keep their eyes open for anything unusual, with an understanding of the kind of crimes that have happened in the past in that area. So far we are pleased with how it seems to be working.

RP: What about neighborhoods where crimes are underreported? How can the algorithm predict the probability of crime in an underreported area?

CM: Any time you’re using data you are challenged with the underlying concept of “garbage in, garbage out”: If you don’t have good data in the first place — and in this case, it (the data) would be dependent on people reporting crimes — then it’s going to be hard to get good predictions. Which is one of the reasons why I don’t think predictive policing in a vacuum will be effective; it has to be done in a context where we are working to encourage people to become active in their neighborhoods and to report crimes, and [when we are] working to serve and do more outreach to traditional underserved populations in the community. So there has to be a real effort to ensure people are reporting crimes.

RP: What can you say to address concerns that predictive policing will unfairly profile certain neighborhoods?

CM: If the goal is to predict where crime might occur based on crime that is occurring now or has occurred in the past, I would think most neighborhoods would be very excited and frankly would desire to get that extra police attention. One of the frustrations that folks have in a community like Richmond, where we don’t have a huge amount of police staffing, is how do we use that staffing to have the greatest effect on crime reduction? I can’t have a cop everywhere at [the same] time or just send police out randomly to patrol neighborhoods. If I have limited resources, which I do, I think that the best thing I can do is give them the best available information about where crime is happening and what areas throughout the city need greater attention if we are going to reduce crime.

There has obviously been debate as well as legal cases in New York City about specific police tactics — we are not blindly following what anybody does in the field. We take our own path here in Richmond, based on several core principals, the first and foremost which is doing policing that is constitutional, that is legal, and that demonstrates respect for the community. One of our core principals is relationship building with the community, so the last thing we want to do is policing that is harmful, discriminatory, where people feel we are in their neighborhoods as an occupying force, where we are treating people poorly. Secondly, we want to do policing that is effective, especially having given the fact that we have limited resources. So we try to keep up with what’s going on in the field that works, and that’s part of the reason why we are trying predictive policing.

RP: Twenty-three people were recently arrested after a court approved wiretapping that involved the Ceasefire program.

CM: Our priority with Ceasefire and with any of the other violence reduction activities that we are involved in is to stop the shootings and save lives. We start first of all with an accurate assessment that there is a relatively small group who are involved in a disproportionate number of shootings and really serious violence in the community. A good many of those individuals have relationships, albeit, loose knit at times, with each other. Some people refer to that in a more broad way as gangs, but I think that’s a little bit over-simplistic. In Richmond there are relationships that are very fluid and they change frequently. Our role is to figure out who those people are because by knowing that, that enables us to avoid profiling and enables us to avoid simply going into neighborhoods, for example, where there might be a disproportionate number of young men of color. Our goal is to focus on people that we know, through building intelligence, and through talking with people in the community.

The idea with Ceasefire is you have identified these people so then how do you engage them and say: Look, this has got to stop. We want you to live and you have a future. We don’t want you caught up in this kind of activity that’s either going to cause you to end up in the morgue or jail. So what can we do as a community to give you support, training, resources and other kinds of assistance to make a choice to get out of that particular lifestyle and do something different that will keep you from being involved in further shootings?

So that’s kind of half the Ceasefire equation. The other half is saying to that same group of individuals: OK, we know who you are and we know what you are doing. If you keep doing it and if you keep wreaking havoc on neighborhoods and keep killing each other or innocent people who get caught in the crossfire, if you keep doing things that are incredibly harmful to yourself and the community, there are going to be really serious consequences for that. Obviously, we prefer that you make the choice to get the services, take advantage of the support and move out of that lifestyle, but if you want to do things that are incredibly harmful to neighborhoods and people who live here in the community, then we are going to bring every legal consequence that we possibly can to stop you from doing what you are doing.

With the most recent police activity related to the wire, let me be clear, that was not driven by the idea, “here are a bunch of Ceasfire participants. Let’s go out and just start wiretapping their phones and building a criminal case against them.” It was based on very, very solid intelligence that was gathered over time that indicated that these were people who were actively involved in committing really serious crimes directed at each other, and the community was often caught in the crossfire. What we had to do was work with the district attorney’s office so we could get a court order to do those wiretaps.

RP: What did the wire reveal?

CM: It is pretty chilling stuff. When you are hearing people talking about planning murders, planning to go out and kill people, and then you actually are able to catch them taking affirmative steps to do what they say they would be doing — in other words, you hear people say we are going to kill so and so at such a location — and then you stop a car and there are four people in it headed to that location, all with guns, I mean, that’s pretty scary stuff. This wire actually allowed us, I think, to save a number of lives. We would have significant number of additional homicides in this community if we had not been able to utilize (the wire).

I’m sure these tapes will become part of the evidence that will be heard in court and I think some of the folks that are critical of this sort of approach will find it very eye opening to hear some of the stuff that is being planned and directed among some of these young men. I think we really followed through with what we promised a number of these guys in the ceasefire program we would do. We told them, “We don’t want you to make the wrong choices but if you do, if you are continuing to go out and kill each other and continue to commit crimes that are harmful to others in the community…” We had a two-year-old infant that was shot. We had people, completely innocent, who were shot in this crazy back and forth retaliatory shooting. That is not acceptable. That has to stop and we told people that if you keep doing that, we mean business and there will be consequences. We certainly carried through on what we said we would do.

That said, over time people will see that the services are there and that the community’s desire to be supportive is genuine, and that there are consequences for continuing to be involved in committing shootings. Then the percentage of folks who make a better choice goes up. Ceasefire is a long-term project and it’s hard work — its hard work for the community, it’s hard work for the police, and it’s a delicate partnership because it’s hard for community and police to understand each other. It takes a lot of difficult conversations, a lot of thoughtful planning and analysis. We are doing our best. We are in it for the long haul, but it’s not easy.