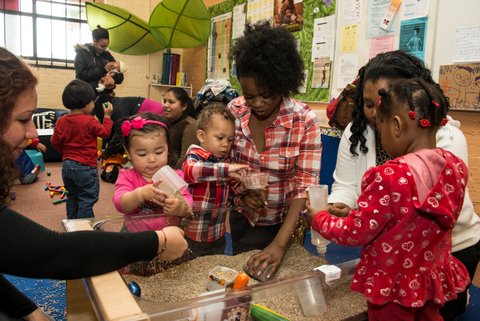 Posted at 10:34h in News, Youth by Pulse Editor 0 Comments

Every Thursday at the West County First 5 center in Richmond, a group of ten to twelve moms gathers to discuss the issues that matter most to them. The group, Kahawia Uzazi, which in Swahili language means “brown parenting,” is a space where African-American mothers can share their experiences. Many come for the sense of community; others say they just like having a chance to break away from their normal routine.

For First 5, a non-profit that focuses on supporting families during the first five years of a child’s development, the meetings serve the dual purpose of attracting more African-American parents, a group whose numbers have fallen at First Five’s San Pablo and Richmond satellites in recent years.

“We started the group to encourage moms to participate more in the programs,” says Alisa Robinson, the group facilitator. “We’re taking a different approach to outreach targeting African-American parents.”

Last fiscal year, only 120 of the 1,394 program participants at the non-profit’s Richmond and San Pablo sites were African-American, and only 85 were Asian or Pacific Islander. By comparison, 1,014 of all clients were Latino, a number that reflects a larger demographic shift that has been occurring in Richmond in recent years.

Between 2000 and 2010, according U.S. Census Bureau data, the number of African-American residents in the Richmond declined by 10 percent, while the total number of Latino residents grew by 13 percent.

As a result, First 5 is not the only organization operating in Richmond that is grappling with how to maintain its ties to long time African American residents, even while Latinos have become the largest single ethnic group in the city, at 40 percent.

“We are seeing a changing demographic trend where a lot of African-American families are moving out of Richmond,” says Eric Aaholm, executive director of Youth Enrichment Strategies (YES). “We’ve seen a lot of our families who have attended our camps for years move out of the area, and we don’t know exactly where they’re going.”

With the changes taking place in the city, YES, like First 5, has been making an effort to adapt. The 14-year-old organization, which sends urban youth and their families to summer camps, is putting a deliberate emphasis on nurturing multi-cultural relationships between staff members and program participants who come from different cultural backgrounds, in order to make everyone feel welcome and foster understanding between long time residents and newcomers.

“We really emphasize that all of our programming is done with a focus on cross-cultural and relationship building and interaction,” says Aaholm. “We think it’s really important that families who live in the same neighborhood and go to the same school are connected to one another.”

At Richmond’s RYSE Center, a youth development organization, director Kimberly Aceves says about a quarter of her staff is made up of past youth participants. As an organization whose mission it is to empower youth to become community leaders, says Aceves, the organization has committed itself to hiring young people to administrative roles once they age out of the center’s programs. The success of that strategy is apparent in the diversity of the organization’s staff.

First 5 director Alexia Rojas says language is increasingly a factor when making hires due to the fact that Spanish-language skills are so in demand. Much of First 5’s current staff is bilingual.

“When we speak to Spanish speakers in English they only get a small part of what were are saying,” says Rojas. “Often we have to duplicate the conversation in Spanish. To provide the best possible service to people, you want to speak in their language.”

Nevertheless, Rojas acknowledges meeting the needs of the city’s growing Latino population can result in fewer resources for targeting other communities, including African Americans.

“We are being proactive about this and we have already started our new outreach strategy. My goal now is to increase diversity in the staff as positions opens up,” says Rojas.  “I know we aren’t the only ones dealing with this issue.”Another local non-profit, Building Blocks for Kids (BBK), is also looking to refine their outreach efforts.

Lyle says BBK’s door-to-door outreach allows them to directly share with families what programs are offered at their site.

“I think a lot of people put out a flyer, but some African-American families don’t see them (the programs being advertised) as their need. So when we go door-to-door, we talk about the offerings… about what is here that they want or need.”

Rojas agrees that part of the challenge in bringing in more African-American participants is communicating the value of the services, especially those not perceived as providing basic needs.

“There is a lack of communication and awareness about nursery rhymes,” says Rojas. “Some see it as a luxury, but they play a role in language development.” The catch-22, she adds, is that “if you can’t get them in the door, you can’t pass on the information.”

Still, says Lyle, “It’s not the information, resources, or services that come first, it’s the relationship.”