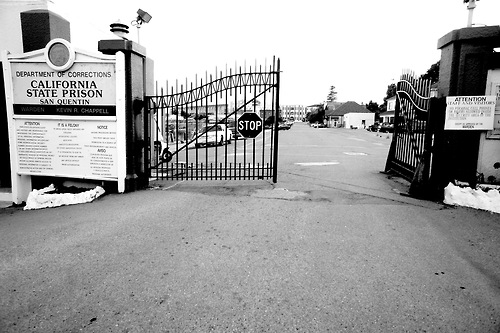 Posted at 17:39h in Elders by Pulse Editor 0 Comments

SAN QUENTIN — As I walk down the hill, beyond the blind curve, “the yard” reveals itself. I walk past groups of men congregated around tables. There are more inmates over on the running track, and about another dozen on the basketball courts. Men play catch on a baseball field in the distance, and three men surround a punching bag in the foreground.

“CDCR” (California Department of Corrections and Rehabilitation) is written in yellow letters on the back of prisoner’s jean jackets. “Tennis Shoes Only – No Boots Allowed” is written on a sign near the tennis courts. The words “Lower Yard Shack” label a small building, smack in the center of the yard, and another sign reads, “No Toilet Paper Allowed On Lower Yard.” I wonder to myself why, without breaking stride.

There is racial division in the yard, with African American men near the basketball courts, and the majority of white inmates near or on the track and on the baseball field. Latino inmates are between the tennis courts and the punching bag. There are also a few Asian inmates, who sit amongst themselves. With so many people on the yard, I wonder: how many are in the cells?

As I walk, I use head nods to acknowledge everyone I make eye contact with — I believe every human being deserves at least that much respect. I also give a nod of respect to the Corrections Officer as I sign one last tablet with my name, the date and military time.

Then I walk into the San Quentin newsroom. I’m here with my journalism teacher from UC Berkeley, William Drummond, and another student. We’re at the headquarters of the San Quentin News, a monthly publication that is printed and distributed to inmates at this prison and which is also available online at SQnews.com. It is one of the only newspapers currently written by and for incarcerated people in the United States.

The newspaper’s offices are nestled away in a portable, which is on the opposite end of the yard from the prison entrance. It has the feel of a traditional newsroom with chairs, desks, and computers. There’s a TV off to one side, and a whole bunch of old copies of the San Quentin News mounted in the rafters of the single-story trailer.

Anywhere from 6 to 10 men of all ages and races come in to write and edit stories. The articles consist of recent happenings in the prison, their personal stories, and their perspectives on life.

One of those writers is a man by the name of Watani Stiner, who is serving time in connection to the murder of Black Panther leaders Bunchy Carter and John Huggins. He once escaped from San Quentin, lived in exile for 20 years and then turned himself in – just so the kids he fathered while in exile could have U.S. citizenship. He writes a column called, “From an OG’s Perspective,” which he uses as a platform to voice his opinion on issues having to do with the generation gap, as he sees it, and to create dialogue between people with conflicting perspectives.

In the June 2013 edition of the San Quentin News, Stiner wrote about the perceived lack of respect between elder and younger inmates. He cited a conversation that he had with a young inmate who claimed that he knew the rules of the game and showed respect to his cellmate, an older gentleman, only to have the older man not reciprocate the respect.

“Some of these OG’s around here don’t deserve no respect!” Stiner quoted the young man as saying, while they spoke in a stairway. “If you don’t give none, you don’t get none,” continued the young man. “That’s the way I think.”

In his analysis of the young man’s experience, Stiner wrote:

“While initially the young man wanted to know ‘who is wrong,’ I don’t believe that’s the real issue. It’s not a question of who is wrong — the young man or his ‘OG’ cellmate — it’s a question of what is wrong. And what’s wrong is two grown men being forced to live together in a cage half the size of a small bedroom closet. Such a condition, by any stretch of the imagination, is certainly not conducive to a harmonious relationship between any human being(s).”

In prison, it’s true that many of life’s basic needs are met: There is shelter and nourishment. There are religious buildings and hospitals. There are places for exercise and places to write. But in California prisons, where overcrowding is the issue of the day (and has been for years), the question that begs to be asked is: How can humanity truly be achieved in prison without the one key thing that’s missing — personal space?

I leave the newsroom, give the CO a head nod and sign the tablet confirming my exit.
I walk past the baseball field, the basketball courts, and the “No Toilet Paper Allowed On Lower Yard” sign. I walk up and around the blind curve, and past the patio where the well maintained garden is. After showing my I.D. to the guard and signing out on two different tablets, I’m back in a world where we value personal space. •