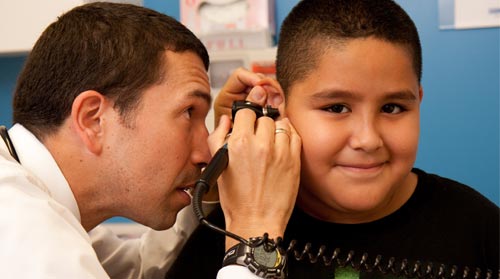 Posted at 15:01h in Health by Pulse Editor 0 Comments

A new report shows the number of uninsured children in the United States is declining, especially among those living below the poverty line. But there are still over 5 million uninsured kids in the country, and they remain disproportionately Latino.

Joan Alker, executive director of the Georgetown Center for Children and Families (CCF), which released the study, attributes the drop in uninsured children to “the success of Medicaid and the Children’s Health Insurance Program (CHIP).”

“We’ve seen a decline in employer-sponsored coverage for this population,” she says. But unlike with many uninsured non-elderly adults, “Medicaid and CHIP have been there to pick up the slack.” As a result, she says, the rates of uninsured children are at historic lows.

“People are thinking the last five years have been problematic for children, and certainly we’ve seen poverty rates remain very high,” Alker says. Nationally, more than 1 in 5 children are living in poverty, but the rate of uninsured kids has fallen from 9 percent to 7 percent since 2008, and the rate has declined in 49 states.

Alker spoke in a telebriefing last week hosted by Georgetown CCF and New America Media, along with advocates from the DC-based Center for Budget and Policy Priorities (CBPP) and the Asian and Pacific Islander American Health Forum (APIAHF).

Shelby Gonzales, a senior health policy analyst at CBPP, said that Latino children make up less than a fourth of the children in the United States, but represent 40 percent of uninsured children.

Michele Stillwell-Parvensky, a policy associate with Children’s Defense Fund – California (which will co-release Georgetown’s report in California), says that between 2010 and 2012, the number of uninsured Latino children in California has declined by nearly 100,000; but, Latino children still account for nearly 70 percent of the uninsured kids in California, despite being about half of the child population.

In 2012, there were still nearly half a million uninsured Latino children in the state.

“The great news is that California has significantly reduced the number of children of color who are uninsured. Now, we must step up our education and outreach efforts to make sure that every family knows about the health care options available to them.”

Priscilla Huang, policy director for APIAHF, says that Asian American, Native Hawaiian, and Pacific Islander children also have higher rates of uninsurance than their white non-Hispanic peers. In 2012, over 7 percent of these children lacked coverage.

Of children in all ethnic groups, American Indian and Alaska Native children have the highest rate of uninsurance overall; in 2012, more than 16 percent were uninsured.

Alker says that nearly 70 percent of uninsured children are already eligible for Medicaid or CHIP, but are not enrolled.

The advocates agreed that when parents are insured, their children are more likely to be insured; consequently, using federal dollars to expand Medicaid to more adults, a provision of the Affordable Care Act that only half the states are moving forward with in 2014, would lead to more children becoming insured.

Huang stresses that “one of the best ways we can help close the coverage gap” is for the states that have rejected Medicaid expansion to change course.

Dinah Wiley, a senior research fellow at Georgetown CCF, adds that “efforts to streamline enrollment, conduct community-based outreach, [and] provide information and assistance in languages other than English” will further contribute to closing the gap.

Alker also says that even though the number of uninsured children is decreasing, undocumented kids continue to be left out.

“We have the tools to make a dent [in the remaining uninsured],” says Alker. “Having said that, we are still going to have undocumented children who are not eligible in most states for any coverage programs. That will remain unfinished work even if we continue to make progress and accelerate coverage with implementation of the Affordable Care Act.”