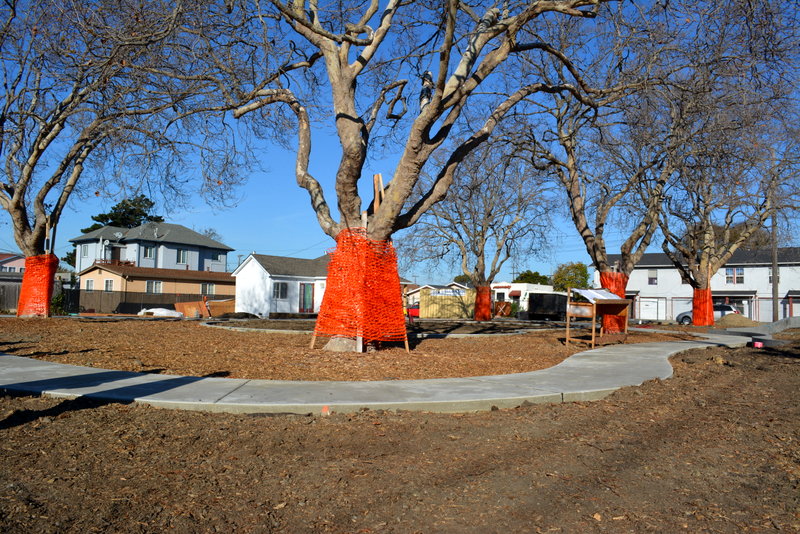 07 Jan Transforming Richmond, One Park at a Time

Last month, Pogo Park, a nonprofit community effort to improve parks in the Iron Triangle neighborhood, hosted a tour of its project sites in Richmond for park department board members, their families and friends. It was the first in a series of tours that will take place in early 2014 that will give the community a look at new park and playground projects, and a chance to meet the people behind the work.

The tour began at Elm Playlot, where guests were shown a storyboard that documented the five-year journey to transform Elm Playlot into the first Pogo Park project. Guests then toured the park and saw the ongoing construction of a zip line, trike path, and “global village.”

The tour moved on to Pogo Park’s second project, Harbour-8 Park on the Richmond Greenway. Here, Pogo Park is working with local partners, including Gompers Guerrilla Garden, neighborhood gardeners, and building-trade studios, to develop a two-block section of the Greenway into a children’s park surrounded by gardens. Next, guests hopped on bikes provided by nonprofit Cycles of Change and rode to 23rd Street to view key nodes of Unity Park, a large-scale park on the Greenway that will be built in collaboration with multiple community-based organizations in Richmond.

Everyone then returned to the Greenway where they were served lunch. Richmond DJ Mr. Goodbeer provided the ambiance, with soulful tunes that hummed softly over the chatter of Pogo Park’s guests.

“The purpose of these tours is to get people out to our project sites, to see for themselves how five years of dreaming and planning is now being actualized,” says Sundiata Sidibe, Pogo Park’s communications director. “Many people have only read or heard about Pogo Park. But the way to really get a feel for our projects is to come out, tour the sites yourself, and talk directly with our team of local residents that are doing the work. These tours also provide an opportunity for key stakeholders in Richmond to discuss how we can collaborate to better serve the community.”

To reserve a spot on a tour, email Sundiata at sundiata@pogopark.org