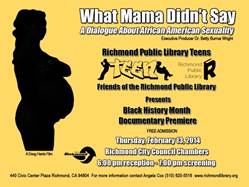 Posted at 10:04h in Arts and Culture, Youth by Pulse Editor 1 Comment

“What Mama Didn’t Say: A Dialogue about African American Sexuality,” recently premiered at Richmond City Hall. The event was hosted by the Teen Services Division of the Richmond Public Library. The documentary, produced by local filmmaker Doug Harris, explores multiple issues around sexuality within the Black community – essentially, all the topics about sex that our families don’t talk about, such as having children out of wedlock or at a young age.

The film makes a strong argument that history, dating back to slavery, has a lot to do with current Black attitudes about sex. For example, throughout slavery, women were routinely abused by their slave owners. Girls as young as five and six years old were forced into sexual exploitation, and our men were forced to live apart from their wives and children.

Harris connects that history to incidents of sexual abuse that occur in some of our households today. Many times, these abuses happen in secret and never come out; and when they do, they are rarely spoken about publicly.

The film also delves into the healing process: how as a people we need to be healed from sexual abuse; the need to understand and value our own bodies, have discussions, use protection, and make smarter choices about sex.

Several youth representing different community based organizations were in the audience.  I was glad to see all those young bright faces in one place, gaining knowledge and showing an interest in something other than their social media accounts.

David Worthy, a 19 year-old freshman at Contra Costa College attended the screening. He thought his 15 year-old brother should have been there, too. Worthy said his brother is already obsessed with sex, often talking about and even bragging about doing it.  Another youth, Kaleb, 15, a sophomore at El Cerrito High, was also at the screening.

“I started getting curious in middle school… I finally gave in and did it (had sex),” he said. When I asked him why, he responded, “It was all my friends were doing.”

I appreciated how the film dealt with the issue of teen pregnancy and STDs but didn’t try to preach abstinence to youth — I think that approach was critical and effective. Teens will do what they want to do, so it doesn’t help to try to scare them, in my opinion.  Just give them the info and let them make a conscious decision. These topics are so important for Black youth because we have the highest HIV rates in the country, our teen pregnancy rate is also high, and because in our communities these things are rarely discussed.

When I was younger, one of the things my mom neglected to inform me about was birth control. I had no idea that women could use contraceptives or be given shots to prevent pregnancy.  I was just to taught “strap up” – use a condom.  At the same time, many of my partners never asked me to use contraceptives.  It wasn’t an issue or a concern.  As a result I had unprotected sex most of the time.  In one year alone, I got multiple women pregnant, which I’m not proud of.  I think my mom was so concerned with me using condoms that she just didn’t think to tell me anything else.  Plus, it might have just been uncomfortable for her to discuss sex with me.

Hopefully more youth will be able to see this documentary film, and begin to challenge their own understanding of what it means to be sexually healthy and responsible.