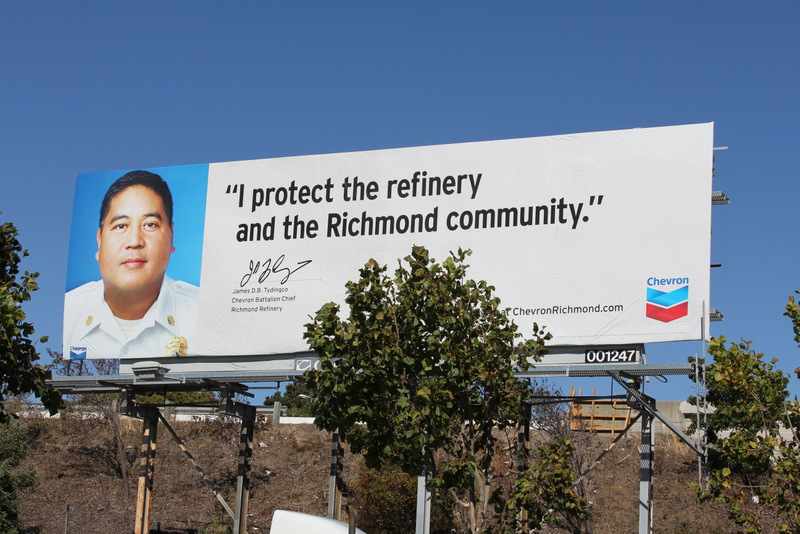 04 Mar What Do You Make of the New Chevron Billboards? Richmond Youth Weigh In

Editor’s Note: Late last year, Chevron began unveiling a series of billboard advertisements in Richmond.  Broadly interpreted, the ads convey a theme of city pride and feature images of workers as well as city landmarks like the Rosie the Riveter museum and local parks.  Initial reactions from residents have been mixed, with some people saying the ads are effective while others have been more cynical about the messaging which they see as an attempt by the oil giant to repair its image in the wake of the latest refinery explosion of 2012 and festering public anger about the refinery’s health impact on the city.  Richmond Pulse asked three youth from Richmond to weigh in on the billboard campaign.

It seems like nowadays you can’t go anywhere in Richmond without seeing Chevron’s mark.  The oil giant has been running a massive citywide propaganda campaign to make their company appear as a loving member of our community — billboards showing pictures of people of color who work for them, saying that they live and work in Richmond and safety is their number one concern. [It’s] an obvious attempt to try to stay in a positive light in the eyes of Richmond residents after their explosion in 2012, [but] Chevron is doing nothing to fix these issues.  In fact, they seem to think that throwing us a few dollars (in the form of this propaganda) will keep us quiet.

I never realized that I lived next to an oil refinery, most of my life.  It wasn’t until I was older that I truly grasped what that really meant.  My mother and two of my sisters have developed asthma since we moved to Richmond, a direct result of the air pollution that is spewed out daily over our tiny North Richmond neighborhood. People tried to sue and they basically gave out money for them not to be able to [do so], with some sort of settlement where folks who had lived in certain parts of Richmond at a certain point in time would receive money. My honest opinion on the Chevron is that they are a ruthless, greedy mega-corporation with no respect for human dignity. Their general disregard for the health and wellbeing of the communities they affect every day is appalling.

Chevron’s billboards are all over the place in Richmond. I have even noticed the Chevron logo on posters in BART.  The billboards all have the same message: that everything positive [in Richmond] has come from Chevron.  Chevron has put hazardous smoke and chemicals in the air and most of us in Richmond have breathed it in.  These billboards say to me that we should be content with environmental racism; that it is okay to become sick from the pollution in the air as long as we give you all a few hundred dollars.  They seem like they are trying to make us all forget about the past incidents at the refinery.  I do realize Chevron has given a lot of money to organizations in Richmond, but my question is: was it because they truly care about the people of Richmond and want to see us change and grow?  Or do they just want to buy organizations so they can continue to hurt us and the organizations will never be able to speak up or out about the refinery.

It was toward the end of 2013 when I started noticing the Chevron billboards popping up sporadically, displayed high in the sky on various main streets in Richmond.  Now, as of February, they are nearly impossible to avoid. They have been spreading like wildfire on what seems to be every other block, or anywhere with a decent traffic flow.  Not only do they stop there, I have spotted these advertisements in surrounding cities such as Berkeley, Oakland and even BART, which as we all know travels throughout the Bay Area.  My initial reaction to these billboards was distrust and anger.  The quotes they wrote next to the proud faces of the featured employees were generic. Being a Richmond resident I found it offensive and to some extent a bit racist that they chose to use a Hispanic and Black man for these adds in a city prominently dominated by these two groups of people. They are using slogans such as, “I protect the refinery and the Richmond community,” which is a bit of a joke to me.  How can someone claim to protect a community [that] they are poisoning with toxic fumes?