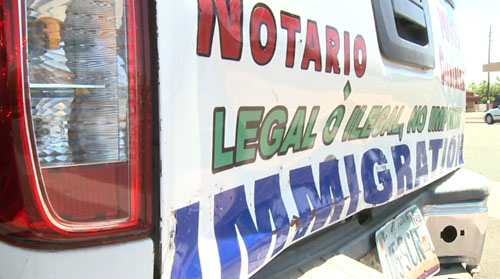 Posted at 10:25h in Immigration by Pulse Editor 0 Comments

REDWOOD CITY–Cecilia, an undocumented Mexican immigrant, never anticipated that her life in the United States would turn into a real-world telenovela, the popular Spanish language dramas.

A few years ago she married a U.S. citizen who soon started to mistreat her. He later filed for divorce without telling her, but then the couple reconciled and got remarried. Then he was diagnosed with terminal cancer. Before he died, he told his wife that he wanted to help her regularize her immigration status.

That’s when Cecilia, who declined to give her real name, decided to seek out legal advice from an acquaintance. The individual charged her $2,500 but never filed her immigration case. Today she is still undocumented.

Scams on the rise

Cecilia, who works as a janitor in the Bay Area, is one of a growing number of immigrants taken in by those who promise to regularize their immigration status for a fee – and then don’t deliver.

San Francisco District Attorney George Gascón says his office has seen an uptick in the number of complaints from immigrants victimized by such fraud.

As it did in 2013. In October of that year, Gascón’s office, in partnership with community organizations in San Francisco, launched a campaign to raise awareness about immigration fraud. The multilingual campaign in English, Spanish and Chinese aims to educate immigrants about how to make sure their immigration consultant is licensed.

“This is not a new problem,” Gascón told a crowd at the launch of the campaign. “The best way to protect you and your family from being victimized is through prevention and education. Be a savvy consumer and beware of scammers who take all your money by overstating their ability to perform immigration work.”

When Cecilia consulted with an immigration attorney, she found out that U.S. Citizen and Immigration Services (USCIS) had no record of her case.

Cecilia believes the woman, who allegedly offers tax services and hosts a local Spanish-language radio program, never sent in her application. When she asked her to give back her original documents (her birth and marriage certificates and her husband’s passport) the woman said that she had lost them.

Cecilia admits, however, that she hasn’t reported the woman to the authorities, because she “didn’t want any more problems.”

According to Gascón, very few of these cases ever make it into his office, making it a difficult crime to prosecute. Victims, he said, are often afraid of going to the authorities, or they are still hopeful that their application will go through. Some simply don’t see any point in reporting fraud.

Getting help from community organizations

In most Latin American countries the term “notario” means lawyer. But in the United States, a notary just means someone who is licensed by the state to witness and sign documents.

“Notaries can’t represent a person in court, they can’t assist them in a formal legal process; they can only fill out forms. But anyone can fill out a form,” said Diana Otero, coordinator of the immigration program at Catholic Charities of San Mateo. She says immigrants need to get help from attorneys or qualified people that know how to deal with the immigration process.

“To know if a person qualifies for an immigration benefit requires many years of experience, a lot of knowledge,” said Otero. “These [individuals] have no idea of the great harm they are doing to our community.”

Gascón added that Latino immigrants aren’t the only target for this type of scam. Similar incidents occur within Asian communities.

Still, many immigrants may not be aware of the risks, said Vanessa Sandoval, program director with SIREN (Services, Immigrant Rights and Education Network) in San Jose.

“People have to be attentive, because immigration cases are very serious and they have severe consequences,” said Sandoval. “If a person applies for a benefit they do not qualify for, [that] can result in a deportation.”

Sandoval offered some advice to help people avoid being a victim of fraud.

For more information and resources to avoid immigration fraud, go to www.uscis.gov, which also offers information in Spanish.