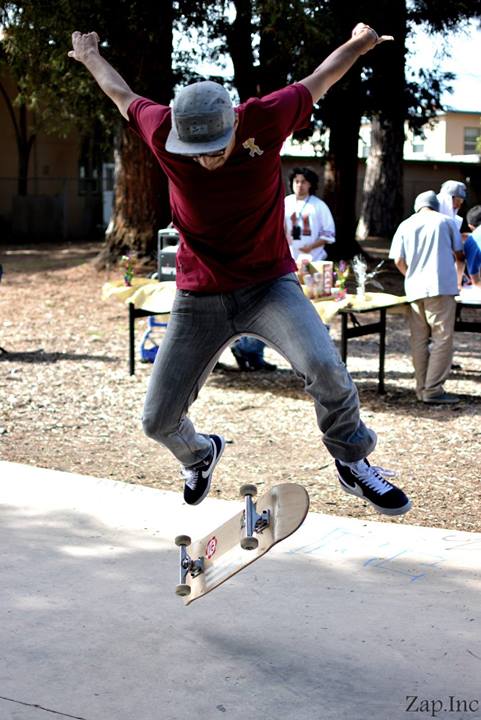 28 Mar Exploring the Science of Skateboarding

The skate park at Richmond’s Nicholl Park became a physics classroom on a Wednesday in March, when an event called “The Science of Skateboard Physics” introduced local teens and young adults to the physics principles guiding the way they ride.

Hosted by the Teen Services Branch of the Richmond Public Library and the Richmond Recreation Department, the program attracted skaters of various ages and levels of experience.

Angela Cox, the event’s organizer and the Richmond Library’s teen librarian, says she hoped to help young skateboarders see the connection between science and their sport.

“A lot of times people think that physics is a course that is abstract, that has absolutely nothing to do with their lives,” she says. “But a lot of [the youth] are skateboarders and really want to learn how to perfect their techniques and do more difficult kinds of tricks.”

While Cox handed out sports drinks and energy bars, over 50 attendees checked out the event’s main attraction: the Exploratorium’s mobile skate exhibit, on loan from the San Francisco-based museum. Inside, participants found their center of gravity while balancing on mock skateboards, and tested the speed and durability of skateboard wheels of varying widths.

Rider safety was also highlighted. Local skate instructor Ali Karayel led demonstrations on how to fall properly while riding and how to avoid major injuries.

Josue Hernandez, 22, says the event’s turnout is evidence of a growing skate culture in Richmond. “I would love to see this more often,” he said.

“I think it’s cool for the kids to know that people care about what they’re interested in,” said Jenea Brisby, who attended the event with her son.

Brisby had seen the mobile skate exhibit in San Francisco and was glad to see it brought to Richmond’s youth. “We shouldn’t have to go to San Francisco to enjoy things like this,” she said.

Major Jones, 22, has been skating for thirteen years and says he has considered the science behind the sport before, but was interested in learning more from the exhibit and hopes that events like this will spread awareness of the skate community in Richmond.

“I think skateboarders would make great scientists,” he said.