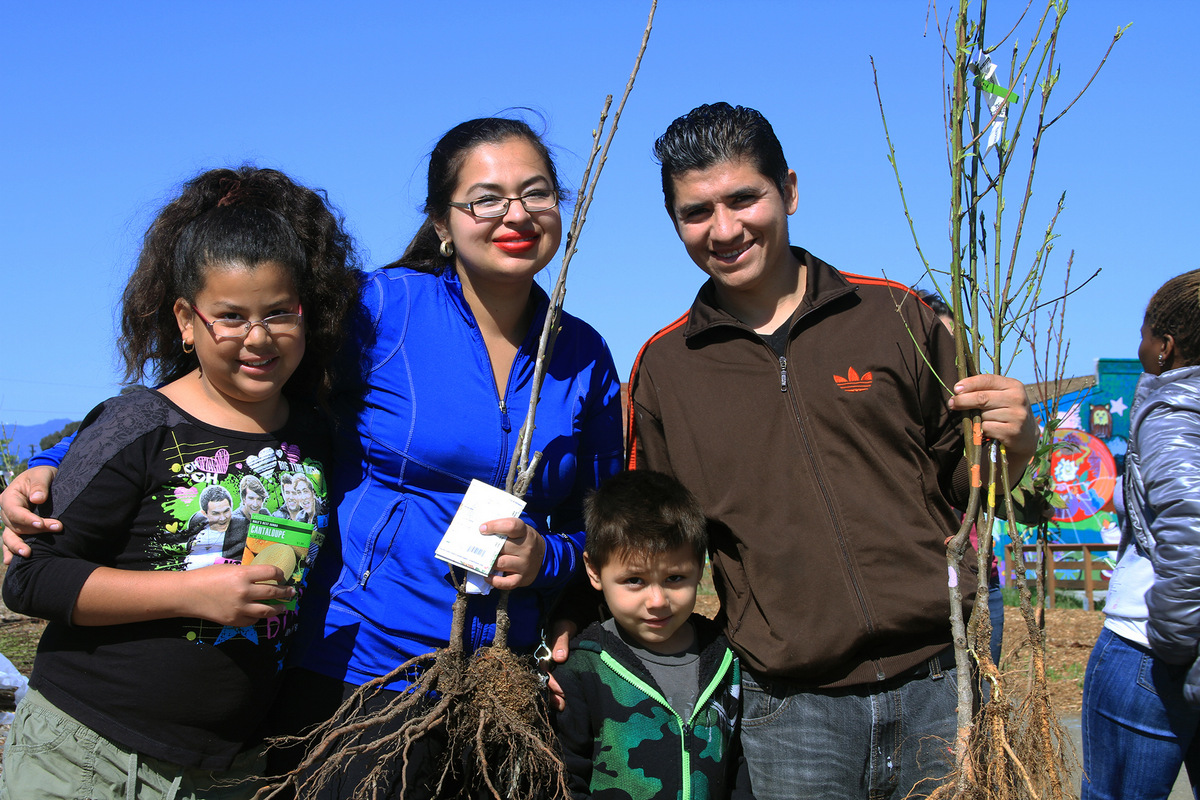 Posted at 15:41h in Arts and Culture, Environment, Re- Entry by Pulse Editor 1 Comment

Near the gazebo on the Richmond Greenway at Harbour Way, small trees bagged in plastic were spread out on a bed of wood chips. Families and Richmond residents huddled together, examining the trees by type: cherry, nectarine, peach. The apple trees were long gone – they’d been snapped up by the early birds.

The Tree, Seed & Veggie Giveaway on April 5 was the fifth time that Self Sustaining Communities, a Richmond nonprofit that promotes locally grown food, has distributed hundreds of fruit, nut, and olive trees to Richmond families and other local gardeners. To date, SSC has distributed over 11,000 trees in Richmond, says Linda Schneider, the organization’s founder and executive director.

She founded SSC in 2009. The organization focuses on working with residents of low-income, high-crime neighborhoods to create sustainable systems, like rainwater harvest systems. SSC has opened three gardens in Atchison Village and the Iron Triangle. In each project, SSC engages residents of the neighborhood, including youth, elders, and the formerly incarcerated. “This is our part of helping the community be green and involved in community transformation,” Schneider says.

Families and tree lovers alike came for the vegetable and flower starts, hundreds of seed packets, and the main attraction – trees of multiple varieties.

Alfonzo Jones, 18, was one of the volunteers; it was his first time at a tree giveaway. “It’s great – it’s bigger than what I expected,” he said. “I’ve learned more about trees today than [ever] before.”

Jones and the volunteer team at the giveaway are part of a new organization, TRUPP, or The Remember Us People Project, which supports the re-entry efforts of recently released offenders. TRUPP works to transition formerly incarcerated people who are on probation or parole back into society by providing a place to stay upon release, as well as aid in finding jobs.

Barry Dugar is the founding director of TRUPP; he was inspired by friendships he developed while in prison. “I myself spent six years in prison,” he says. “The men inside would tell me, ‘You’re lucky, Barry. You have a place to stay [when you’re released], but we don’t.’” The conversations he had with his friends about going home and being on parole inspired Dugar to create a transition program. 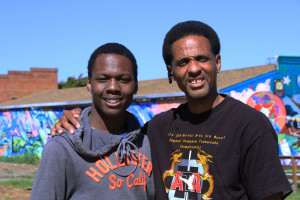 TRUPP currently operates three transition houses and an employment support program. Since it started seven months ago, the organization has helped four former inmates successfully obtain jobs. Most parolees have only three months to find a job; failure to find one can qualify as a parole violation. Word about TRUPP has spread among Dugar’s former prison mates. “I have guys who knew me in prison that are calling for a place to stay, because they’ve heard of TRUPP inside the prison walls,” says Dugar.

The transition houses go farther than just providing a place to stay. Dugar says he focuses on care: “I try to instill in them that yes, we’ve made mistakes. Yet, we are human and we have the ability to care. We can care for others and do something.”

Jones describes Dugar as his mentor. “Barry took me under his wing and I am sort of his protégé,” says Jones. “I am helping in the transitional housing because he has a lot of older people who need help in cleaning up and getting their medicine. I do a lot of odd jobs around the house to help them feel good about themselves.”

For Dugar and Jones, working with formerly incarcerated people is a way of being involved in their whole community. Organizations like TRUPP and SSC are important in the project of building sustainable communities that can thrive.