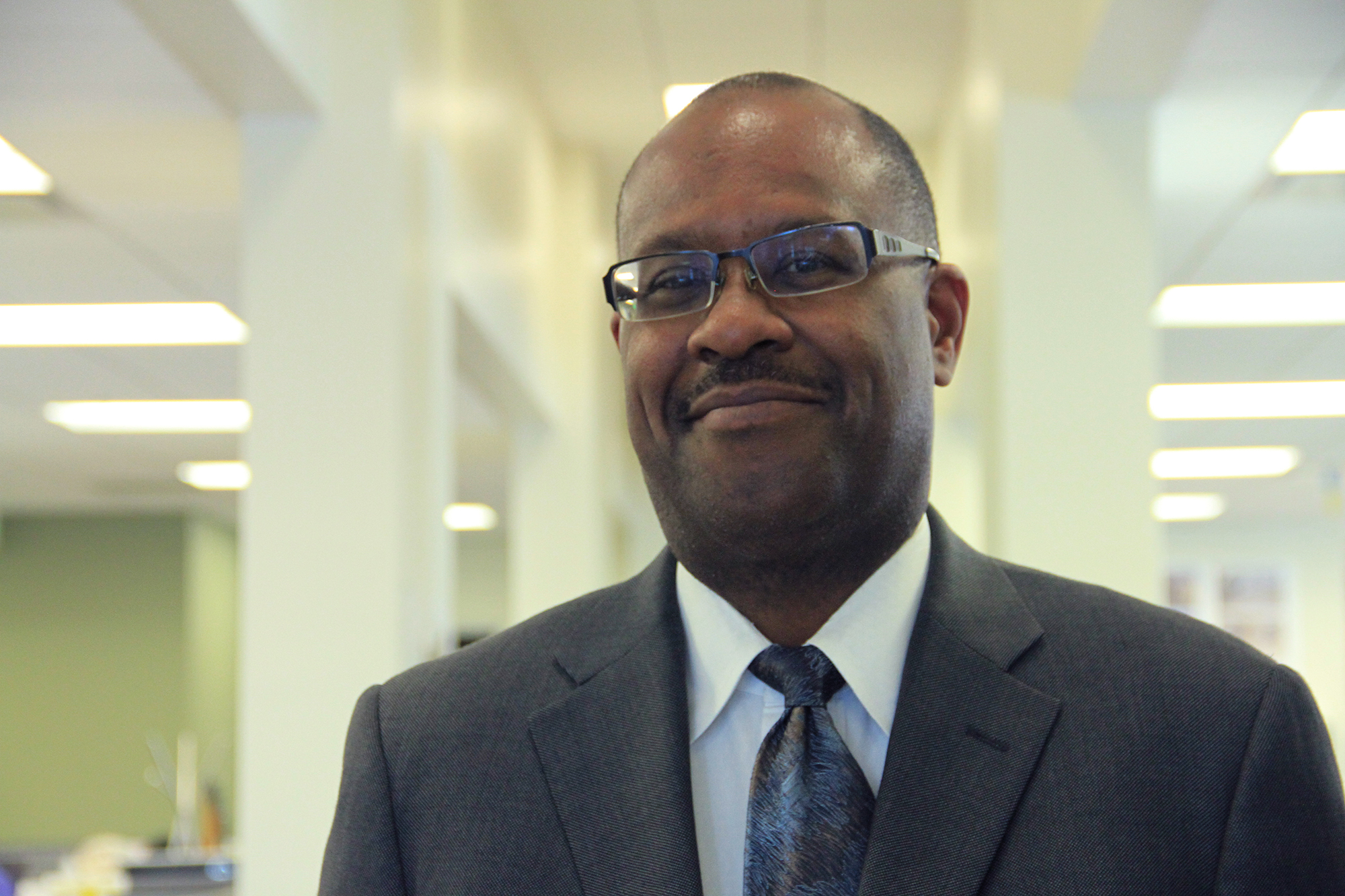 Ed. Note: Charles Ramsey, 52, is currently Board President of the West Contra Costa Unified School District (WCCUSD). He spoke to Richmond Pulse reporter Edgardo Cervano-Soto about why he decided to enter the mayoral race, what kind of leadership he thinks the City of Richmond needs, and his vision of turning Richmond into a “magnet” for young families and professionals.

Richmond Pulse: You’ve held a seat on the school board since 1992. Why did you decide that now was the time to run for mayor in Richmond?

Charles Ramsey: It’s a natural transition of the work I have been doing in the community for a long time. I know this city and I know the needs. As somebody who has been in education and realized the important components of a city, safety is first. We don’t want to live in unsafe places. The second is that you have to provide jobs. People want to know that where they work, they can settle down, take care of their families and have a good quality of life. Equally important is education. You have to have a city that really sees education as the bedrock of the community. Richmond is a city of about 100,000 people. You want to make sure it has aspects to it that signal to individuals that this is a place they want to be.

Richmond has had an economic decline of assessed property values… You can talk about Chevron, eminent domain and all these other issues, but it’s a lot more complicated. If the conversation doesn’t start with understanding how you acquire wealth through an amalgamation of property, then we are not there yet. That’s why the Silicon Valley is booming. Jobs, businesses, law firms are all relocating. Everybody is going down there — San Mateo, Burlingame, Palo Alto, Menlo Park. They are paying huge sums of money to buy houses, [when] they can buy here for a fifth of the price. Why? Because they don’t think there’s the opportunity. They don’t think there are jobs. They don’t think there is growth. They don’t think there are recreational opportunities for their children. They don’t believe it’s safe. We have to change that perception and make this the magnet for young families who would be here… I feel comfortable and confident that with new leadership that is all possible.

RP: Tell us a bit about your history in Richmond, personal and political.

CR: I am really a homegrown person. My father in 1964 worked in the district attorney’s office in Contra Costa County after law school. My mother was an undergrad at Berkeley. I was born in 1964 and we moved to Richmond. We lived on 41st Street and Cutting in an apartment and then a year later my dad bought a house over on Overend Street. My parents divorced in the 70’s and my father got a job as a professor at Boalt (school of law at UC Berkeley). He took care of us and we lived in Berkeley, [and] I would visit my mother on the weekends in Richmond. It was in the early 80’s when I graduated from UCLA. I came back to Richmond because my godfather, David Rosenthal, and father had a law firm, Ramsey and Rosenthal, at the Point. So I moved to Point Richmond… and I decided to stay. Then in 1992 — George Livingston was the mayor at the time — I was appointed to the Richmond Planning Commission and in 1993, I ran for the school board and was elected. This is where I’ve sat for (the last) 21 years.

RP: What qualities do you think will be critical for the city’s next mayor?

CR: Listening… consensus builders… an understanding that being adversarial and strident doesn’t necessarily move the agenda forward. You are not always going to get everything you want but as long as you are assisting and providing opportunities, you are progressing. I think right now the [city] council [is] too locked in two mentalities and philosophies and is unable to reach a consensus. That’s a huge mistake.

RP: To date, what are your major accomplishments that merit a consideration for mayor?

CR: I got the (school) district out of bankruptcy. When you take a district that in 1991 was the first school district in the country to declare for bankruptcy and 20 years later to pull that out, that’s a huge accomplishment. And we paid it off seven years early… We had no teacher layoffs the last two years. We are lowering class sizes for the most needy students. We have a $1.5 billion infrastructure rebuilding program where we are demolishing dilapidated schools. We are making the schools wireless… We have an award winning Ivy League connection program. We’ve helped hundreds of kids go to summer studies programs all over the country and now we just added the University of Chicago. I am just thrilled by the fact that at De Anza High we have a state partnership with the State Bar of California for its law academy. Only four districts in the state have that relationship, and ours is permanent. We partnered with the city to make sure our schools are safe — they didn’t have the money so we paid for eight police officers from our (schools) budget. We have partnered to keep schools open in Richmond: Grant Elementary, Olinda Elementary, and Kennedy High School. I thank the council for their visionary leadership. I just feel that it’s been tremendous throughout all of Richmond. I feel positive about everything that we have done.

RP: What incentives do you see for youth and young adults in Richmond to commit to building a future here long term?

CR: That they can get a good education; that when they go out to college they have a place that they envision and believe in… so they’ll come back here, start a family, contribute to the community and be a participant in activities after school and on weekends; that they can create opportunities and good businesses and have dreams. Those dreams can be realized by coming [back] here [to] the City of Richmond, just how my father did.

RP: Where do you stand on the major environmental issues, such as the future of the refinery, facing the city?

CR: We need to continue monitor Chevron, the explosions and fires at the refinery. We need to continue having a conversation [about] how we make sure the modernization (of the refinery) ensures safety. We want to have occupational safety. We want to make sure that when we talk about the shoreline, we see smart development and growth. We are fortunate we have public mass transportation. We have three BART Stations that help us service our community. El Cerrito Plaza serves the Richmond Annex and Southwest neighborhoods, El Cerrito del Norte BART Station services the Southside and you have the Richmond BART Station that services the Point, Downtown, North and East. Can it get better? Yes, the Richmond Station can serve as an expansion to create an urban village. I think that we need to do things around the housing authority: we need to rebuild not just Hacienda (housing projects) but Nystrom Village. Nystrom Village has been around since the 40’s. It needs to be improved and upgraded. We need to come up with a vision and really look at that whole corridor and try to change it.

CR: I am as transparent as it gets. I have no problem. I have always been up for full disclosure. I believe… when people make public records requests, we need to make sure we get information to people promptly and I think that having that level of transparency helps make voters and constituents more comfortable and confident that the government is working for them and not for special interests. I really want to echo and communicate to you and those reading this newspaper that that kind of transparency is pivotal to me.

RP: How would that apply to the housing authority, given the recent reports alleging gross mismanagement at public housing projects?

CR: I don’t want to start pointing fingers but you don’t see those kinds of problems in the school district. I am running a $1.5 billion rebuilding infrastructure program, so I understand the need for oversight. This program has not been mismanaged. You do not hear any controversies, or any catastrophes. You don’t hear it because I am always vigilant. You’ve got to stay on top. We have more oversight committees than you can believe: safety, citizens bond and oversight committees, a technology committee, and college and career readiness committees. We have oversight to ensure that all systems are operating at the highest level, and we make sure we have public communications and discussions all the time.

RP: What kind of team would you be bringing to City Hall?

CR: I think you have to learn and identify what is going on. I am not saying that I will be the messiah if I walk into the City of Richmond. I will be a part of a team that [the city] has in place. I want to integrate myself. I want to learn where the players are. I am not trying to throw anybody out, I am trying to come in and coordinate with those already there and see how I can make all of us better as a team. There are a lot of valuable people that have done good work and they know what they are doing, they have a lot of experience. I want to tap into that and be able to build upon that, and add my piece.