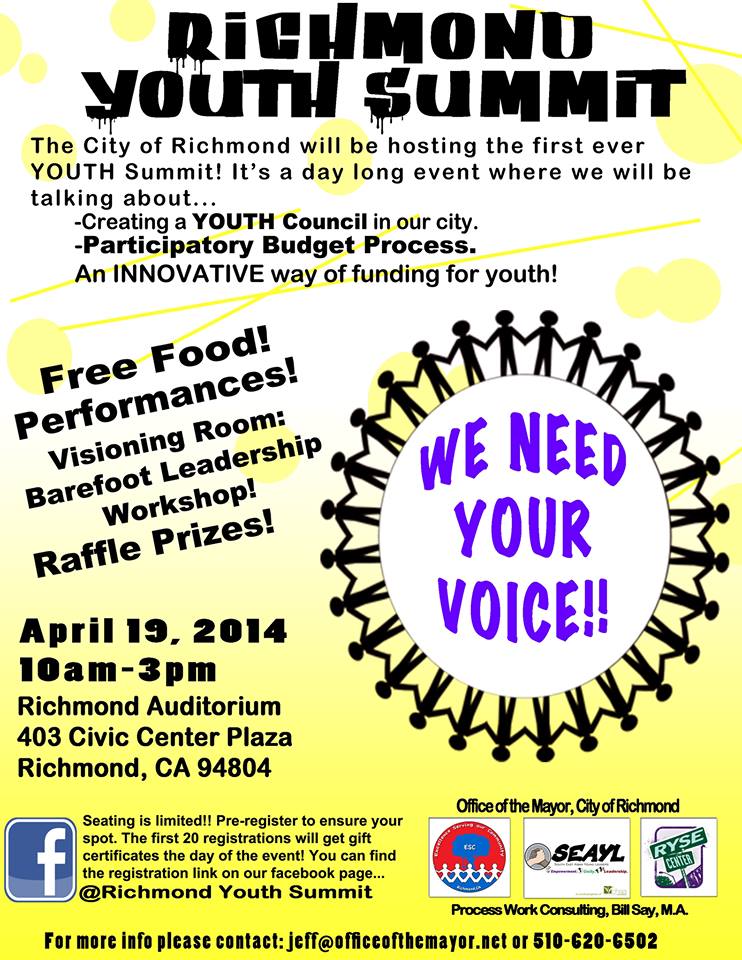 Posted at 16:45h in Politics, Youth by Pulse Editor 0 Comments

News from the Mayor’s Office | Written by Nicole Valentino

On Saturday, April 19, while many adults and families from the Richmond community were gathering at Point Molate Beach for the grand re-opening, young people of the city gathered for the 2014 Richmond Youth Summit. Mayor Gayle McLaughlin hosted the summit, at the Richmond Memorial Auditorium, to bring together young people of diverse backgrounds to voice their perspectives and priorities for the city. Building on the efforts of youth and youth advocacy groups in Richmond, the event focused on identifying and supporting youth leadership, creating a youth council, and introducing a form of democratic budgeting called participatory budgeting.

The summit was planned and convened in collaboration with local youth-serving non-profits, including the RYSE Center, SEAYL (Southeast Asian Youth Leaders), Eastbay Center for Performing Arts, and the Freedom Fighters, who helped organize the summit.

The daylong program was free, open to young people ages 14 -21, and included workshops, entertainment, and information tables for youth-serving organizations.

Local young adult activist Melvin Willis emceed the event. He shared his story of shifting from complacency—knowing little of his personal power or the value of civic engagement and collective movements – to actively engaging in transforming his community for the better. Today Melvin is active in housing rights work as well as youth advocacy and a variety of social justice issues. He is a member of ACCE (Alliance of Californians for Community Empowerment), the RPA (Richmond Progressive Alliance), and BMOER (Black Mobilization Organization Education Richmond).

Mayor McLaughlin opened the program with enthusiastic remarks about her appreciation of young people in the city. She expressed complete confidence in their ability to know what they need, and to inform adult leaders about their desires and expectations for a healthy and thriving Richmond. The mayor also encouraged the youth to become – or to continue to be –actively engaged in civic and political processes.

The workshops – Barefoot Leadership, Participatory Budgeting and What is a Youth Council? –were designed to stimulate dialogue and produce concrete ideas to influence local policy decisions made by the City Council. Workshops also aimed to encourage young people to organize themselves – with and without adult allies.

The Barefoot Leadership workshop explored what it means to be an agent of change, and it provided practical tools for further exploration and action. It was designed to connect and explore visions for healthy relationships, families, community and the city of Richmond.  Participatory Budgeting explored the role of young people in an innovative democratic process used around the world (and locally –as in neighboring Vallejo), in which average residents help decide how public dollars are spent. In the workshop, young people learned how this could be done in Richmond. The Youth Council workshop focused on the possibilities for a youth council in Richmond. Workshop leaders drew examples from other youth councils, and asked for input about what the right focus would be for Richmond.  The idea here was to envision the formation of a Richmond Youth Council, inspired by voices coming out of the summit and other voices from the youth advocacy community.

Adult volunteers and allies were welcome to attend the summit in support of young people,  and their contributions were much appreciated. Special thanks to the RYSE Center’s Jamileh Ibrahimi and Anibal Hurtado, Richmond Library’s Teen Service staff Angela Cox, Richmond Excellence Serving Communities (ESC) program staff Rochelle Monk and Bertha Romo as well as the ESC program volunteers, Richmond PAL, Girls Inc. and mayoral candidate Mike Parker for stepping in and offering to videotape segments of the day.

The program ended with a fun raffle of prizes that included: t-shirts, gift cards for juice drinks, movie theater tickets, and one I-pod nano. Mayor McLaughlin and Vice-Mayor Jovanka Beckles had closing remarks of gratitude and inspiration for the youth participants at the end of the day.

Nicole Valentino is a ‎Community Advocate in the Mayor’s Office at City of Richmond.