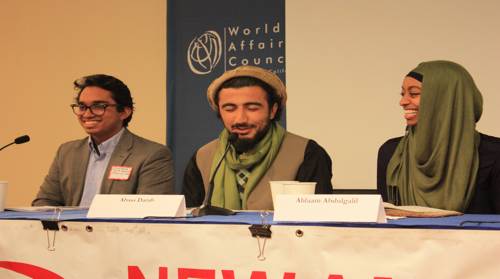 Posted at 17:19h in Business by Pulse Editor 0 Comments

SAN JOSE, Calif. — Salmon Hossein, an Afghan-American Muslim working on a joint law and public policy degree at UC Berkeley and Harvard, says that his own family hates that he has a beard. The outward sign of his Muslim faith, he says, makes his family worry about his future.

Hossein, who spoke on a recent panel of young Bay Area Muslims in San Jose organized by New America Media in partnership with the One Nation Bay Area Project, is among a generation of young Muslims who grew up in the shadow of the terrorist attacks of Sept. 11, 2001, and the rise of Islamophobia in America. Some have personal experience with hurtful speech and ignorant comments about their faith. Yet many still choose to show their faith through practices like prayer and fasting, wearing a hijab (head covering), or growing a beard.

For these young people, finding the personal meaning in these practices is part of the path toward finding their own identity within the faith.

“Your practice is what identifies you as a Muslim,” says Rasheeda Plenty, an African-American student of Islamic theology at Zaytuna College in Berkeley, the first liberal arts Muslim college in the United States. “Do this, don’t do this, fast, or hijab – you’re in this Muslim community. Everyone’s doing that, everyone expects you to do that. But [growing up], there wasn’t a conversation of the why … How is this connecting me to my creator? What is this doing for my heart?”

About a quarter million Muslims live in the Bay Area, and close to half are under the age of 35, according to the first-ever study of the Bay Area Muslim community. The study was co-authored by Dr. Farid Senzai, a political science professor at Santa Clara University, and Dr. Hatem Bazian, an ethnic studies professor at UC Berkeley and co-founder of Zaytuna College.

Hossein, who grew up in Alameda County and Southern California, was in eighth grade at the time of the Sept. 11 attacks. It was his second day at a new school in Los Angeles.

He remembers that in his homeroom, his teacher asked him if he was from Afghanistan, and followed with the question, “Do you know anything about what’s going on?”

Some of his classmates went on to refer to him as “Afghanistan” throughout his time in school.

He recalls going to his family dentist a few years ago when he first grew his beard; someone in the office whom he’d known since he was a child laughed when she saw him and said, “Oh my God, you look just like the terrorists.” She said it “almost lovingly,” and Hossein says it was hard to be mad at her.

It wasn’t the only time he got that reaction. A law student classmate of his recently said, “You’re starting to look like the Taliban.”

But Hossein says these attitudes have only made him more determined to keep his beard, a physical connection to his faith and his very identity.

Sadia Saifuddin, a student at UC Berkeley, is Pakistani American and grew up in Fremont and Stockton, Calif. She is the first Muslim student to serve on the UC Board of Regents.

Like Hossein, Saifuddin remembers facing scrutiny at school at the time of the Sept. 11 terrorist attacks. She recalls that she chose to start wearing a hijab – a “public and external symbol of [her] faith” – just a few months before Sept. 11, 2001. After the attacks, she says, she faced a “barrage of questions” at school, though she was only in the fourth grade.

Those questions have persisted into her adulthood. But despite much of the criticism she hears about wearing a hijab, including the assumption that women who wear it must be “oppressed,” she says that wearing it has been liberating for her – and that being able to choose whether or not she wears it is what’s important.

“I get to talk to people and the first thing I worry about isn’t how good my hair looks or whether I gain a couple of inches, because a lot of that is covered up and it’s really more about what I have to say,” she says. And for many women, she says, it’s a way of feeling closer to God.

These practices can also connect some young Muslims to their larger communities in very personal ways.

RoSeanna Shavers, who is African-American and grew up in the Nation of Islam, says that when she was very young, she told her mother that she wanted to be white. “Next thing you know, I was in Muslim school,” says Shavers.

She says that going to an Islamic school helped with what she called her “color sickness,” and gave her something to hold onto, connecting her with her African-American identity. While she is now non-practicing, she says, “[Islam] is in me.”

The One Nation Bay Area Project – a collaboration between the Marin Community Foundation, The San Francisco Foundation, the Silicon Valley Community Foundation, and Asian Americans/Pacific Islanders in Philanthropy – works to strengthen relationships between Muslim and non-Muslim communities. Visit their website to learn more about the project.