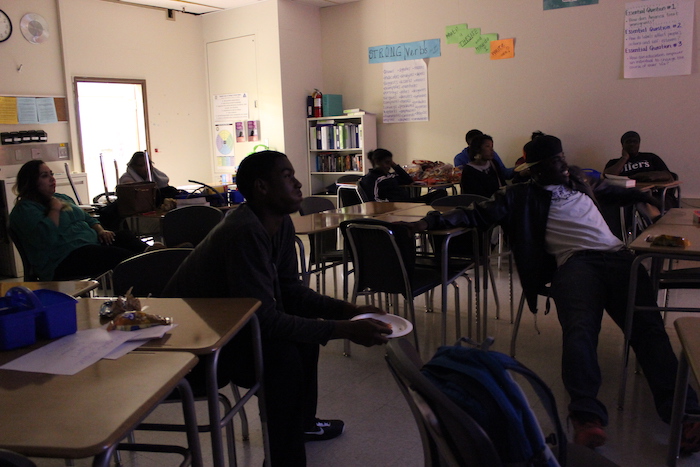 Posted at 14:03h in Education, Youth by Pulse Editor 0 Comments

It’s a Thursday evening at Richmond High School, and the hallways of this normally bustling campus have fallen quiet. Behind closed doors in the school library, a small group of African American parents, community members and school administrators are huddled in a conversation, in service to the question: What do our children need to succeed?

“Exposure and experiences outside of the community.”

“Pride in our cultural heritage.”

The group, dubbed the African American Student-Parent Collaborative, was born out of a desire to improve the educational experience for the school’s black students – a group whose numbers have diminished greatly on campus in recent years:

A decade ago, during the 2003-04 school year, there were 348 black students enrolled at Richmond High School, according to the California Department of Education. That number has steadily declined to an all-time low of 83 students currently. That’s just over 6 percent of a total student body population of 1,309.

By comparison, African Americans make up roughly 26 percent of Richmond’s population, according to U.S. Census Bureau figures from 2010 — although that number, too, has been declining. A decade earlier, in 2000, blacks comprised 36 percent of the city’s residents.

According to the California Department of Education, the graduation rate for African American seniors at Richmond High during 2011-12 was 57 percent, lowest among all ethnic groups on campus.

Essence Johnson, a Richmond High senior, describes the academic support she’s received at her school from teachers and staff as adequate — but says she still felt there was something lacking.

“I feel like I get a lot of support from some teachers, but I don’t feel like I [always] had the support… for our African American culture,” she says.

The idea of starting an advocacy group for the school’s black students came from Tamisha Walker, a local organizer and parent of a Richmond High Student, who got inspired by a series of conversations she had with her son about what he was experiencing at school.

“[He said] that he doesn’t feel valued as an African American student,” says Walker. “He feels that his needs are ignored.”

So Walker started talking to other parents and community members, asking them the same question being posed during the parent meeting on that Thursday night. She eventually connected with Andre Aikins of Alive & Free, Aneesha Johnson of the Richmond High Health Center, and school board and faculty members with similar ambitions for the school’s African American students.

Their meetings often function as an incubator for new ideas, and as a space where participants can share their concerns and hopes.

“We as parents need to be here for our kids,” says Andrea Holden, a Richmond High parent who took a bus to the meeting. Her daughter, 17 year-old Jasmine Holden, says she loves it that her mom has become an advocate for her education.

“You don’t see hard working single parents coming out at six or seven at night,” she says. “I wish all students would [have a] parent [that] cares and takes time to come to your school, not because you’re in trouble, but for your education.”

In addition to creating a space for parents and community organizations, Walker saw a clear need for students like her son to have their own platform at the school. As a result, and with the support of Assistant Principle McGee, Johnson, Aikins and others, students were able to institute a Black Student Union (BSU) on campus for the first time in five years.

Umoni Witaker, a senior, says having the BSU is like having a second home at school. “I know I can come here and feel like I have a family here.”

At their weekly meetings, the students gather at lunch and discuss ways to support each other and engage the community. As BSU president, Essence Johnson is in charge of planning the events. Among other things, the BSU has organized a student trip to the Black College Expo in Oakland, and has lobbied successfully for tutoring services at their school-based health center.

Johnson says having an active and visible BSU also lets other black students know that they have a community on campus.

“We host a lot of events, so people see that [we] are here,” says Johnson.

Holden sees value in all aspects of the group.

“The BSU provides a broader picture of the world outside of Richmond, that we (black people) can succeed and actually graduate from high school,” says the junior. “[It’s] great to have supporting teachers and administration to actually back up African American students in this school.”