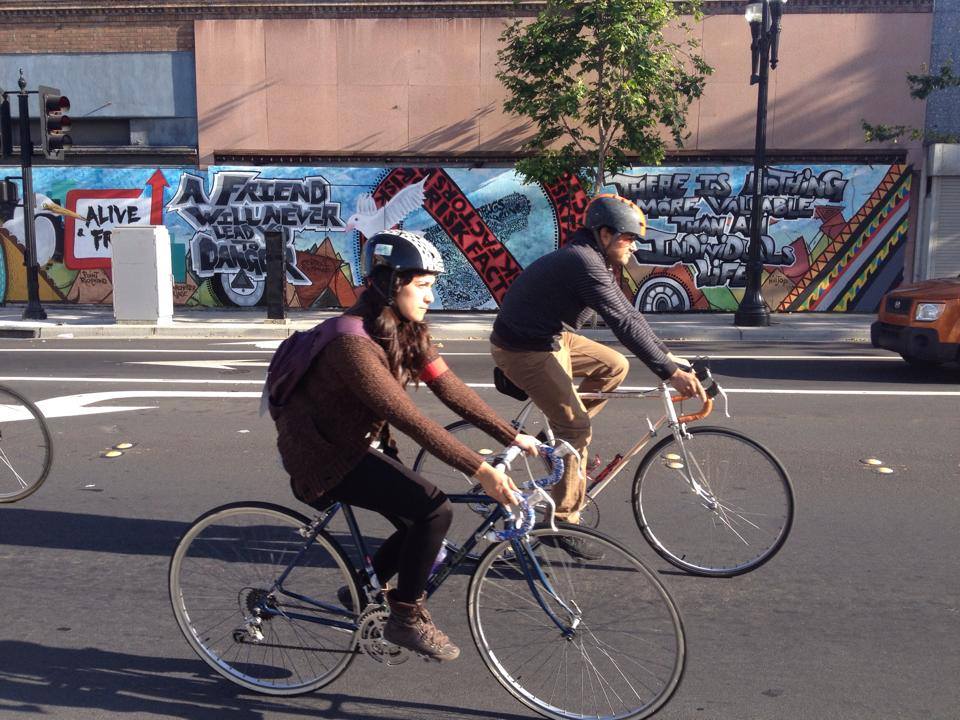 Posted at 00:23h in Environment by Pulse Editor 0 Comments

Scores of cyclists took to Richmond streets Wednesday in a silent ride to draw attention to bike safety issues on the local roads.

About 50 cyclists participated in the Ride of Silence, a global event to remind motorists to safely share the road with cyclists. The event, sponsored locally by Richmond Bicycle Pedestrian Advisory Committee, is also in memory of bicyclists who have lost their lives while riding.

“It really flies under the radar how many people are injured or killed while biking each year,” said Mike Uberti, health and sustainability associate in the city manager’s office.

“We are biking as a large group so our presence can really be felt moving through traffic. It’s a somber reflection and a way to show that bikers do use the roadways.” 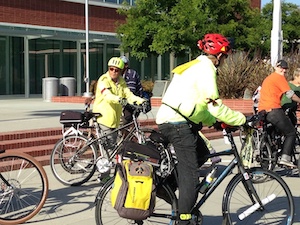 Cyclists leave City Hall for the Ride of Silence.

As the cyclists gathered at Civic Center Plaza Wednesday evening, they shared stories, adjusted their bicycles for the ride and plastered signs like “Share the Road” on their backs as a reminder to drivers.

This is the fourth year Richmond has participated in the Ride of Silence, which coincides with National Bike Month. The first Ride of Silence was held in Dallas in 2003 to honor a cyclist who was fatally struck by a bus. Now in its 11th year, the event attracts roughly 12,300 cyclists in over 350 cities worldwide.

Richmond police officers escorted the group as they made their way through the city with stops at some of the intersections where bicyclists have been killed, including Nevin and Barrett Avenues, Ohio and Carlson Boulevard and Ohio and Second Street.

There have been several reported collisions but no fatalities last year or this year, Uberti said.

David Meza, 22, has been the victim of a hit and run twice while riding through Richmond. The accidents left him with a concussion and destroyed his bike.

“Biking is dangerous and we put our lives at risk for different reasons, some just like cycling and others for the environmental impact,” he said.

“In the last couple of years there have been more riders in Richmond and a lot more people are aggressive about biking and letting people know the rules.”

Richmond has about 12 miles of bike lanes and nine more miles proposed before the end of 2016. It also boasts 32 miles of Bay Trail. The city has made strides in recent years in increasing its bike paths and implementing several dedicated bike lanes along major thoroughfares.

“We are really making our city bike-friendly,” Mayor Gayle McLaughlin said before Wednesday’s silent ride. “We are developing a bike culture and an awareness of safety. Cyclists have a right to be on the road and it’s very important that we educate motorists of that.”

But while cyclists praise the city’s improvements, some residents complain at city council meetings that the bike lanes snarl traffic and that cyclists don’t obey the rules of the road.

“I get people who yell at me all the time, saying, ‘Go on the other side of the road!’” Meza said. “They think I should be on the opposite side of traffic or on the sidewalk but that’s against the law. They just don’t know the rules.”

Uberti says there’s a perception in Richmond that bike riding is only for “Berkeley types.”

“In reality, it’s an equity issue and people really use biking as their primary means of transportation and not just a hobby,” he said. “We want to continue to promote that bicycling is a real form of transportation, especially in this community.”