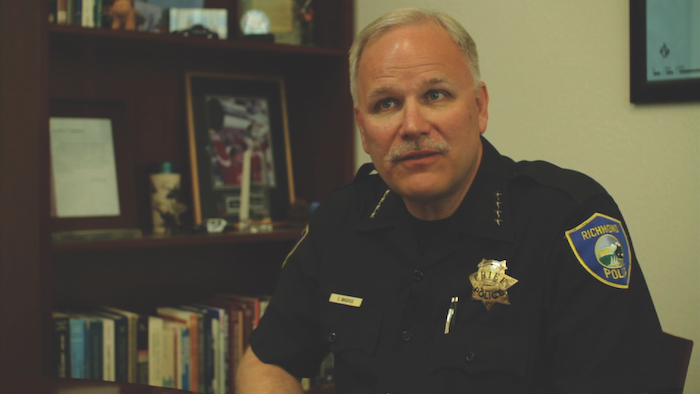 Editor’s Note: For this latest installment of our ongoing interview series with the Richmond Police Chief, we eschewed the usual crime related topics for a more human conversation about family, the benefits of living where you work, and the mental strains of doing police work.

Richmond Pulse: It’s not unusual for police officers to live outside the cities they serve, but as police chief you decided to make Richmond your home. What went into that decision?

Chief Magnus: I understand why most police officers who are working the streets on a day to day basis don’t necessarily live in the community they work in. It can be awkward and even risky to run into people that you’ve arrested or dealt with under what might not always be pleasant circumstances, so I get it from their perspective; that’s not unusual. But my role obviously is a little different from theirs, and I think as the chief it’s important that I do live where I work, and I really enjoy being in Richmond and I’ve had very positive experiences as a resident here.

One of the biggest [issues] relates to the importance of code enforcement. When you live near homes that have been foreclosed, when you see examples of illegal dumping, or other kinds of blight right down the street from your home, when you are going back and forth to work and you see properties that are not being properly attended to, that gives you an added incentive to get those issues addressed. I think sometimes if you’re not in the city you serve, you can just sort of drive in and out. So code enforcement has been a very big issue for me but another is, neighbors share with you their concerns. You hear things directly from people who live around or near you, and I think that gives you an added incentive to want to make things better, and to be as responsive as possible to them.

There have been times where it can be a bit much — when people knock on your door to report a crime, or when you have crimes that occur literally across the street from you, which I’ve had happen as well. That’s not always something that you want to come home to or deal with but that’s part of life in the city, and it makes you a little more responsive to what’s going on.

RP: Does the fact that most Richmond police officers live somewhere else hinder their ability to do the job effectively?

CM: I think that even if you do not live in the community you work in, you can still very much be part of the community in terms of the way you police the neighborhood that you’re responsible for. My expectation is that officers… think of the beat that they are assigned to as their second home, and therefore, they ought to be concerned not only with reducing crime but assuring that people get the best possible service and follow up, that they are attentive to quality of life issues, including code enforcement matters, and that they build the strongest possible relationships in those neighborhoods.

RP: You recently were married to Terrance Cheung, the chief of staff in Supervisor John Gioia’s office, making you the first openly gay male police chief to be married. How has that been received by your colleagues and community members?

CM: Very well. I think people have all been really nice about it. They’ve been offering congratulations. We had a really nice wedding celebration party that a lot of community people were part of, and that’s what we wanted. We were very happy that so many people joined us. It’s been a very positive reception.

RP: Are many of your officers married? What would you say are some of the challenges of being an officer, and also a husband or father?

CM: Many of the officers are married or in relationships that involve children. Part of the challenge for anybody… is that there always has to be some sense of balance involved, and when that balance is out of whack, I think it can really put strain on a relationship. This is a very demanding job, and I don’t even mean that just in terms of hours worked… Officers see a lot of really tough stuff and deal with some very difficult circumstances that you don’t get to just walk away from and leave on the job — domestic violence, cases of child abuse, people who have behaved in a really violent or threatening way towards them; really awful crimes that involve victims that are very traumatized.

I think that we have to be better about recognizing that, just like a lot of people in Richmond have been exposed to trauma, so have our police officers. We need to address [it] in a really thoughtful way, because I think if you accumulate too much trauma over time and you don’t get the support and the help that you need to properly deal with that, it can have a huge impact on your relationships away from work, not to mention how you treat people on the job. So I think the mental health of our personnel in the police department is really just as important as the emotional and mental health of people out in the community. And as we look at better meeting community needs around that issue, I think we also need to look at how we can provide police officers and dispatchers and other folks who deal with a lot of tough stuff on a day to day basis with the kind of support and services they may need.