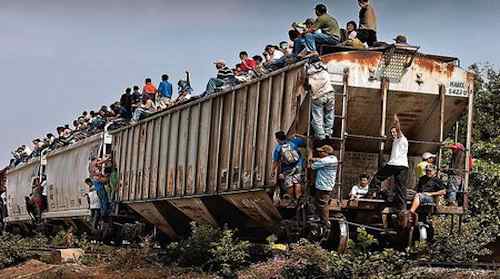 Posted at 13:41h in Immigration, Youth by Pulse Editor 0 Comments

RICHMOND, Calif. – From the moment I woke up, I realized there was something unusual about the morning. The sun wasn’t out, the birds weren’t singing, and instead of the school bus my dad would be taking me to school.

I soon realized why that bus hadn’t come: walking to school my dad and I passed two white sheets lying on the ground, both of them stained with blood.

We later learned the victims were two local kids killed after trying to run away from gang members who were chasing them. It was 2006. A month later I left El Salvador and headed north for the United States. It still feels like yesterday, and I realize as I watch the stream of young people flowing into this country from Central America that I was not the first, and I won’t be the last. “I left El Salvador because of the violence in my neighborhood,” said Carlos, 17, “and because I know the country is poor, and if I stayed there’d be no opportunities available for me.” (Carlos’ name has been changed to protect his identity.)He arrived in Richmond in June, after an arduous four-month trek of nearly 1700 miles.From bad to worseThe situation in El Salvador was already bad when I left. The cost of living was rising, surpassing what ordinary citizens could afford, while homicides were increasing with each day. Things only seem to have  gotten worse. El Salvador is one of the poorest countries in Latin America, with the average person earning somewhere around $3,700 per year, according to World Bank data. About 35 percent of the population lives in poverty. The country also has one of the world’s highest homicide rates, at 91 per 100,000 residents. That’s just behind Honduras, which has been labeled by some as the murder capital of the world. “I knew that I could lose my life at any moment if I stayed,” said Carlos, who like many others left El Salvador unaccompanied. “I worried that I’d be followed and pursued [by gang members], which happened several times when I was there.”Carlos says he’s one of the lucky ones, not just because he made it to the United States, but also because he’s still alive. “One of my friends was confronted by gang members and killed … the other one was killed because he attended a school some gang members didn’t like. That’s why they killed him.”Hell on earth“I left El Salvador and when I got to Guatemala, I crossed all the way to the border with Mexico. That’s the hardest part of the journey. You could say that’s hell on earth … since this is where you have to take the ‘beast,'” he says, referring to a network of freight trains used by migrants to cross Mexico.When Carlos reached the border with Texas, he was found and detained by border police and later moved to a detention center where other immigrants were held. Carlos spent almost a month there before he was allowed to leave. “They call it the ‘fridge,’ since the place is always really cold,” he explained. “People were telling me about it when we were on the way to the border, but I had no idea that I was gonna end up staying there … they never lower the air conditioner and we don’t have blankets to cover ourselves with. You don’t know if it’s day or night.”Carlos describes the rooms he and the others were housed in as “little white boxes” that were so cramped that some detainees were forced to sleep sitting or standing up. Carlos noted that on at least one occasion some detainees protested the conditions. “When they would distribute the food, sometimes they would laugh; one time they threw two granola bars in the air to see who of us would catch it first. For the ones that were there, it was an offense.”Carlos is now awaiting his court date to find out whether he will be forced to return to El Salvador. “I see the news,” he said, “and things look more dangerous now than before.”