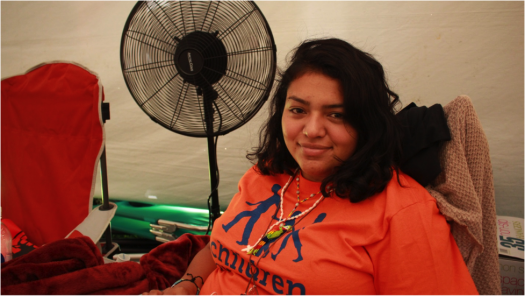 Posted at 12:45h in Immigration, Youth by Pulse Editor 0 Comments

Editor’s Note: This week a group of young people in Los Angeles went on a seven-day fast to call attention to the welfare of children who are crossing into the United States to flee violence in their home countries.

LOS ANGELES – Young people are once again leading the moral charge on a humanitarian issue that they say has been hijacked by politics.

Eight Los Angeles youth between the ages of 14 and 22 are fasting this week to call attention to the welfare of the tens of thousands of Central American children who have entered the United States to flee violence in their home countries.

Eighteen-year old Yamilex Rustrian says she decided to participate in the seven-day fast to remind the country whom the White House and Congress are seeking to deport: “These are children, not animals,” she said. “They still deserve to have human rights.”

The youth are spending their nights inside a giant white tent encampment perched on the grass lawn of historic Olvera Street in Los Angeles, hoping that Washington, D.C. politicians will consider treating the 50,000-plus children coming into the United States as refugees.

Attitudes towards the migrant children have clearly become politicized. Forty-six percent of Democrats support speeding up immigration proceedings even if those eligible for asylum may be deported, as do 60 percent of Republicans, the Pew Research Center reports.

But the fasters say they want to keep politics out of the discussion.

“This a little different from the Dreamers’ movement,” Rustrian said, who is a DACA recipient. “We recognize that this is a humanitarian crisis.”

It isn’t the first time young people have positioned themselves as the moral compass on an issue. From Dreamers (undocumented immigrants who came to the United States as children) to the “undocuqueer” (who identify as both queer and undocumented), American youth in recent years have pushed for a critical dialogue on what they see as today’s most pressing civil rights issues, calling attention to the human faces behind the numbers.

The fasters say they see part of themselves in the migrating children. Some of them, too, fled to the United States to escape violence in their native country.

“I was just like these kids 12 years ago,” said Rustrian, who left Guatemala in 2002 after her father was killed as a result of gang violence. “I didn’t run from my country because I wanted to. I had to,” she said. “The violence and poverty was too much.”

Rustrian was six years old when she and her younger sister Yosselin left. Their father, a bus driver, had been assassinated. He was shot nine times while working his shift.

“I was five. I honestly didn’t know what was happening around me,” said the younger Rustrian. “I know some of the kids (migrating now) probably don’t have their parents (either).”

The sisters trekked through the desert for days to reach the United States.

“It was hard,” the younger Rustrian said. “I remember my sister was about to faint. They didn’t even have waters for us. We were the only little girls there.” The coyote hired to guide them was someone they didn’t even know.

Simon Gun, 19, who is also fasting this week, said he, too, can relate to the migrating children on a personal level.

When an economic crisis hit his home country of South Korea in 2001, Gun’s family moved from apartment to apartment. He remembers each one being smaller than the last.

“It couldn’t get any smaller, so we went to the U.S.,” explained Gun, a Dreamer who is now attending UC Irvine.

Wilson’s mother, Kawana Anderson, was astounded at her daughter’s initiative to join the fast. “I had no choice but to step in and support her, which she’s doing to support other kids,” said Anderson.

President Obama has called for $3.7 billion to deal with the border crisis. His plan includes speeding up deportations, resources, and assistance to Central American countries.

House Republicans are working on their own plan of about $1.5 billion to send in the National Guard, speed up deportations, and undo protections granted the children under a 2008 law that guarantees immigration hearings to minors from countries not bordering the United States.

“Either they’re going to get killed or they’re just going to die from hunger,” said the older Rustrian, worried about the children’s fate.

The fasters are demanding refugee status or asylum for the migrant children, with some hoping President Obama might take executive action.

“This is the country of opportunities. If we call it that, we should truly show that,” the older Rustrian said. “The statue of liberty says ‘Give me your tired, your poor, your huddled masses yearning to breathe free,’” she said. “Why don’t we do that?”