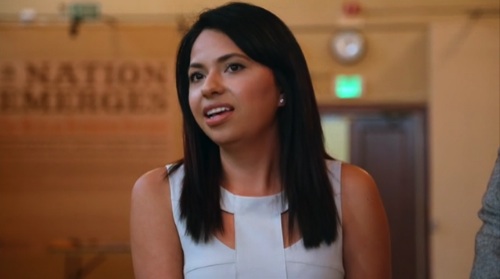 Posted at 13:20h in Education, Immigration by Pulse Editor 0 Comments 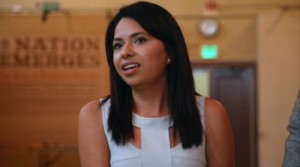 Guadalupe Guerrero, 25, speaking at a briefing for ethnic media on the benefits of citizenship at the Los Angeles Public Library in March.

One year after becoming U.S. citizens, many new Americans say citizenship has changed their lives for the better – from giving them a chance to go to college and get a better job, to being able to vote.

“Before I became a U.S. citizen, I felt like I was an outsider, a person without a voice who can’t really choose to live the life that I would like to see,” said Jinzhi Cang, a 73-year-old Chinese American resident of Houston who became a citizen last September.

“After becoming a U.S. citizen, I feel like I am part of the society,” she continued. “I do have a voice. And I do have the opportunity to vote and to elect an individual who can truly make an impact on the country to really, truly protect and help the people.”

Cang, who came the United States 10 years ago, spoke on a national press call organized by New America Media to commemorate Citizenship Day, which falls on Sept. 17. She said she wanted to become a U.S. citizen because the United States was a place where she could see herself getting old.

“I see the U.S. as a place where people have a voice, and no one is above the law,” she said.

More than eight million immigrants across the United States have green cards and are eligible for U.S. citizenship. Yet only 8 percent of them become citizens each year.

A group of organizations that form the New Americans Campaign is working in cities across the country to increase the number of immigrants who apply for citizenship – by providing free and low-cost help and giving them the information they need.

“Unfortunately, there are a lot of myths about the citizenship process and there are a lot of unknowns about the citizenship process,” said Vanessa Sandoval, immigration legal services program director for SIREN (Services, Immigrant Rights, and Education Network) in San Jose, Calif. “What we are doing with the New Americans Campaign,” said Sandoval, “is demystifying citizenship, making it accessible, answering questions and providing information so that people can make informed decisions about applying for naturalization and so that they can receive affordable help.”

For example, some green card holders don’t apply for citizenship because of the $680 fee. But many people don’t know that a fee waiver is available for those who can’t afford it.

Others may be deterred by the English language requirement. But longtime green card holders who are over the age of 50 are eligible to take the citizenship exam in their own language.

Guadalupe Guerrero, a 25-year-old resident of Compton, Calif., says language was the main reason her father never applied for citizenship.

“His biggest fears were that he didn’t speak English and he would fail the exam,” said Guerrero, who is originally from Michoacán, Mexico. But as a longtime green card holder over the age of 50, her father qualified to take the exam in Spanish.

“My sisters [and I] got together and we all sat down with my father and convinced him to apply to become a citizen,” she said, adding that young people like herself have a “big responsibility” in convincing their parents of the importance of citizenship.

Once he became a citizen, he sponsored his daughters to become permanent residents. As a result, Guerrero and her sisters were able to apply for financial aid and go to college. Becoming U.S. citizens, she said, gave her family access to education and the chance to get a better job. Guerrero now works with COFEM in Los Angeles, the organization that helped her apply for citizenship.

Voting for the first time

For Thanh Bui, a 79-year-old Houston resident who came to the United States from Vietnam in 2005, becoming a U.S. citizen means fulfilling one last dream.

Bui recently found out that she was diagnosed with liver cancer, and has been able to get health care through Medicare and Medicaid. She says specialists have been able to shrink her tumor to half its size.

Now almost 80 years old, the Houston resident says there is one more thing she intends to do – register to vote and vote for the first time. She isn’t sure if she going to live long enough to make it, but, she says, it’s something she’s “always wanted to do.”

“It’s been a year now [since I became a U.S. citizen],” said Bui, “and my life has been a lot less stressful, very happy, and I’ve become a relaxed person with less anxiety, because I feel that becoming a U.S. citizen has given me lots of freedom in this country.”

Bui says she is grateful to the United States “for giving someone, an elderly person like me, the opportunity to live a good life.”

For more information about the New Americans Campaign, go to ‭www.newamericanscampaign.org‬.