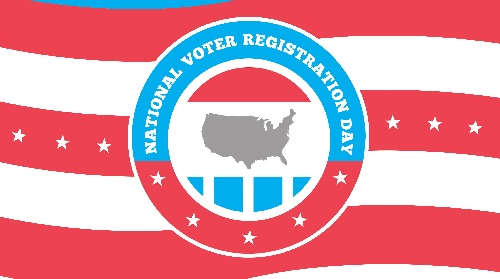 Posted at 12:38h in Politics by Pulse Editor 0 Comments

In a world where every day is a holiday – there’s National Doughnut Day, Pi Day (honoring the number 3.14 and celebrated by eating pie), and Talk Like a Pirate Day (that one is international) – a group of organizations came together and decided that surely one of these days should be dedicated to voter registration.

They designated a day and proceeded to register over 300,000 voters in their first such effort – on the fourth Tuesday of September in 2012.

“The main idea was to try to do for civic engagement what Earth Day did for the environment, and really create one positive, fun, exciting day where everybody could plug in, in whatever way was easiest for them,” says Jessica Reeves, the vice president of partnerships at Voto Latino, one of the organizations involved in starting National Voter Registration Day (NVRD).

This year NVRD falls on Tuesday, September 23, about a month before the Nov. 4 general elections.

Through on-the-ground efforts by participating organizations, as well as online and media communications, the initiative has registered voters in every state – the highest numbers in California, New York, Illinois, and Texas, the last of which saw nearly 11,000 registrations in the first year alone. Over 235,000 of the registrations took place online (which is available in 22 states), and the rest at field events and through the mail.

It started back in 2011, according to Matt Singer, the executive director of the Bus Federation Civic Fund, which mobilizes a network of grassroots organizations to participate in leadership development and other civic programs like NVRD.

Singer, one of the individuals behind the day’s founding, was alarmed by 2008 U.S. Census data indicating that about 6 million people hadn’t cast a ballot that year because they didn’t know how to register to vote or had missed a registration deadline.

And, he thought, the central importance of voting to democracy was in danger of falling out of the public consciousness.

“The core idea of voting, which is central to what it means to be American, has been caught up in partisan squabbles … rather than a celebration of this right that people have fought and died for,” says Singer. “We wanted to bring back this idea of voting as being centrally American.”

He adds that recent research shows that voter registration drives do lead to a measurable increase in voter turnout.

In its first year, the initiative recruited over 1,200 partner organizations to host voter registration events, and today has over 1,800. Partners include well-known organizations like Rock the Vote, as well as a host of local institutions like churches and food banks. The day has been declared official by the National Association of Secretaries of State.

Gregory Cendana, the executive director of the Institute for Asian Pacific American Leadership and Advancement, one of NVRD’s partner organizations, says that the initiative is structured around “key community stakeholders who aren’t always the go-to people around civic engagement.”

He mentions Chambers of Commerce in ethnic communities, such as those reaching Asian American small business owners, as being key for outreach.

Also integral to the day’s success are partners like universities and community colleges, because of their ability to reach young eligible voters.

“Almost any [initiative] that aims to register voters in America is going to end up having about half the people it reaches be under the age of 30, often because they just haven’t been asked,” says Singer. “They need someone to talk to them.”

Many of Voto Latino’s NVRD efforts center around “reaching young Latinos through technology, media, and pop culture in ways that are relevant to them,” such as contests and celebrity partnerships, according to Reeves.

She adds that reaching young Latinos is also important because they are often “gatekeepers for their families. They’re translators for Mom, Dad, Grandma, for other folks in their family who maybe aren’t as fluent, or not as well-versed in the legal language of registering to vote.”

Other key partners for registering voters include organizations that work with new citizens or are embedded in immigrant communities, like the Korean Resource Center in Los Angeles, the Illinois Coalition for Immigrant and Refugee Rights, and several chapters of OCA-Asian Pacific American Advocates.

For now, Singer hopes that more organizations will sign up as partners to promote the day and host events on the 23rd.

“It’s a good opportunity to do something simple and non-partisan, and just make sure that your own community is registered and ready to participate this fall,” he says.

Organizations can still sign up to take part in September 23 and help register voters.