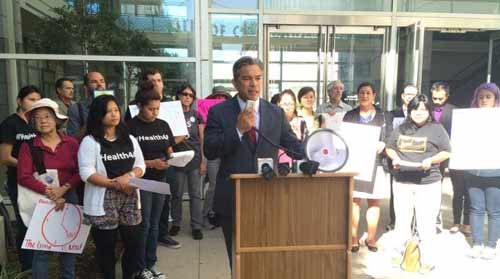 A majority of California voters support the idea of expanding health coverage to include all low-income people in the state, regardless of their immigration status, according to a new poll.

The poll, commissioned by private health foundation The California Endowment, showed that some 54 percent of the state’s voters would support expanding Medi-Cal and Covered California to provide health insurance to all who are low-income, including the state’s undocumented population.

Health care reform under the Affordable Care Act currently excludes undocumented immigrants, and legislation to expand coverage to them in California – the “Health For All” bill authored by state Senator Ricardo Lara (D – Los Angeles) — didn’t make it onto Governor Brown’s desk in 2014. But with numbers showing that public support is growing for providing health care to everyone, elected officials and advocates are preparing for the reintroduction of that bill when the state legislature reconvenes in January.

At a Health For All rally on Wednesday in front of the state building in Oakland, Assemblymember Rob Bonta (D-Oakland) said that he was excited by the poll results, calling them “consistent with the values I have and the state has. It shows we value the health care of our community. I would like to see the numbers grow more, but it’s a starting point.” Bonta co-sponsored the Health For All bill in 2014, and will continue to support it when Sen. Lara reintroduces it for 2015.

The poll surveyed 800 voters in late August in English and Spanish. Support for providing coverage to the undocumented was highest among voters of color, particularly Latinos (69 percent) and African Americans (68 percent), compared to 47 percent of white voters. By age, support was highest among 18 to 29-year-olds (68 percent).

Daniel Zingale, senior vice president of The California Endowment, said that the numbers show “a generational shift under way in California in attitudes” around covering the undocumented.

Approximately 1.4 million people in California lack health insurance due to their immigration status, among them Denise Rojas, who spoke at the rally. Rojas, a young undocumented woman, spoke about her family’s struggle with not having health insurance.

“When I was in college, my mom was diagnosed with uterine fibroids,” Rojas said. “She was denied health coverage so she made the tough decision to immigrate to Canada,” where she was able to access care. Rojas hasn’t been able to see her since then, because her own immigration status prevents her from visiting.

In the poll, when asked about specific aspects of the proposed expansion, voters were most supportive of the idea of improving access to preventative care, and the resulting reduction in overall costs to the state. Some 86 percent of voters were supportive of this.

According to Bonta, providing health care to the undocumented is right now costing the state about $1.5 billion a year, due in large part to the high cost of emergency room visits resulting from a lack of preventative care.

At a press briefing in September, Bonta said that Health For All would cost the state about $360 million in its first year, ultimately saving money.

“Even in a state like California where there appears to be the will to have everyone included, cost is always a factor,” Zingale said on a press call last week. He said there seems to be a growing awareness that “there is a direct connection between prevention and cost savings.”

At the rally, Oakland resident Iris Merriouns agreed. “No one should have to wait until they get acute health problems before they go to see a doctor. It’s a burden on the system. It’s wise to invest now, and pay less later,” she said.