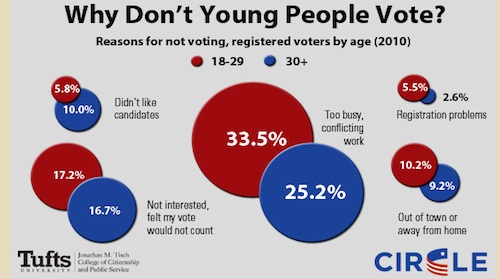 Posted at 15:43h in Politics, Youth by Pulse Editor 0 Comments

Youth voter turnout in North Carolina, including a sizeable segment of ethnic voters, will play a critical role in determining whether Democratic incumbent Sen. Kay Hagan retains her seat against Republican challenger, state House Speaker Thom Tillis, according to data on the voting patterns of youth of color.

“The issue of the youth vote in North Carolina is related to but not identical to issues of race and ethnicity, but North Carolina’s young voters, ages 18 to 30 years old, are more diverse than its older voters. So who votes in this November’s election will be important to the outcome,” said Peter Levine, the director of the Center for Information & Research on Civic and Learning Engagement (CIRCLE), a nonpartisan institute based at Tufts University in Massachusetts.

In addition to North Carolina, states where the youth vote could affect the outcome in November’s competitive political races include Alaska, Colorado, and Louisiana, according to an analysis CIRCLE released in August. CIRCLE’s data on African American, Asian American, and Hispanic youth show the complexities at play in ways that may challenge common assumptions about what motivates youth to become civically engaged or affiliate with a political party.

For example, the data show “a significant percentage of African American men more often identify as conservatives, given the choice of ‘are you a liberal, moderate, or conservative,’” Levine said, as opposed to African American women, who more often tend to self-identify as liberal. Gender differences are not only apparent in choice of political party, but in how they view their personal involvement.

Though young women of color have typically higher rates of civic engagement than men as measured by volunteerism, they are “still less likely to see themselves as political leaders,” Levine said, adding that this view is fairly consistent with women across all ethnic groups.

The contrasts between different groups of youth can be striking. Data from 2010 shows that nearly 40 percent of young Latinos are “civically alienated” in terms of voter registration and voter turnout, falling behind African American and white youth. Yet, young Latina women were among the strongest supporters of President Obama in 2012.

Asian American youth were the next largest group to be “civically alienated” (just over 30 percent), but they led all groups in terms of donations to political causes (17 percent).

The data illuminates the tension between the idealistic goal of broadening youth participation in politics and the need of political parties to win at the ballot box by devising ways to decrease support for their opponents. That is certainly the case in North Carolina where the youth vote surged in the 2008 presidential election but ebbed in the 2010 midterm election, resulting in a Republican-dominated legislature that has sought to impose limits on youth voting.

“The swing in the electorate from election to election is a fascinating story in North Carolina,” Levine said, “but it is really a story of youth engagement and participation in voting. North Carolina shows that the youth vote does matter in competitive races.”

Levine said the youth vote may be critical in Louisiana as well. African American youth comprise about 40 percent of the state’s approximately 300,000 voting-age citizens overall, though only about one-third of the voters. “That’s still a significant bloc of voters,” Levine said. Should they vote en masse for embattled Democrat Sen. Mary Landrieu, it could yield the margin of victory to propel her to another six-year term.

Louisiana underscores the stakes for Democrats in this midterm election as to whether their party can retain control of the U.S. Senate when the House of Representatives already has a Republican majority that can impede President Obama’s legislative agenda.

Levine’s observations are that the younger voters tend to be more liberal on social issues, like supporting gay rights or immigration reform, but that political operatives from either party shouldn’t take the youth vote for granted. “Youth of color voters have diverse interests, and as young people, their votes are often unpredictable,” he said.