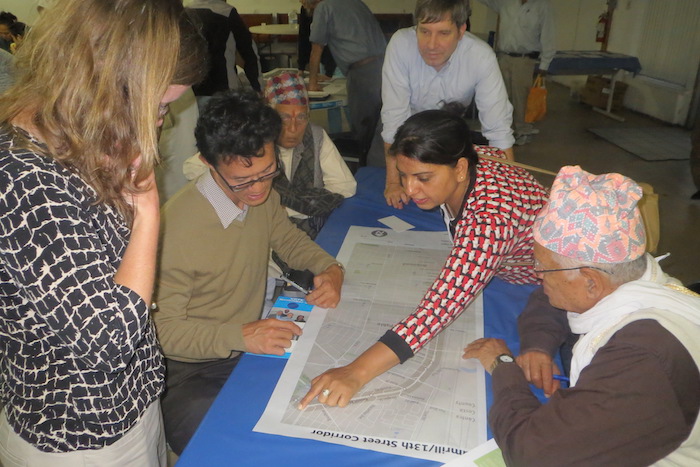 26 Oct A New Vision for Rumrill

Posted at 13:14h in Neighborhoods by Pulse Editor 0 Comments

Biking and walking on Rumrill Blvd. is a risk many residents in Richmond and San Pablo take daily.

On October 9th, San Pablo and Richmond, in collaboration with community and county organizations, hosted the first Community Design Workshop for the Rumrill Blvd. and 13th St. corridor redesign. Rumrill, which turns into 13th St. is an unofficial thruway for many in the area.

Residents filled the room at the Lao Center in San Pablo ready and eager to voice their concerns. But, before that happened, participants had the chance to tour the area.

The bus touring the northern end of the corridor departed from Dover St. Its first stop was the intersection between 13th St. and Esmond St. The dangers to bicyclists quickly became part of the discussion amongst the group. Cynthia Armour from East Bay Bicycle Coalition who rode her bike from BART to the meeting suggested a lane reduction or a “road diet to slim the road” to make it “more inclusive.” Armour believes it would increase the amount of people who use it.

During the bus ride through the strip, San Pablo City Council member Genoveva Garcia pointed out the construction of three new soccer fields by the intersection of Rumrill Blvd. and Sutter Ave. Afterward, people returned to the center ready to eat and brainstorm a new vision for Rumrill Blvd. and 13th St.

Small tables were arranged around the room, complete with maps and markers for participants. Michelle Rodriguez, from San Pablo Development Services, welcomed everyone and began a PowerPoint presentation to highlight the benefits of healthier streets. The project to remodel the street was initiated in March of this year. Since then businesses, Contra Costa College, the San Pablo Youth Commission, and members of transit along with others have been reached out to.

Each table had the opportunity to present their maps with ideas and concerns. Priscilla Fernandez of San Pablo, works for the West County Regional Group. She said she’d like to establish a sustainable, aesthetically pleasing street. She recommended a three bin system for compost, recycle, and trash, solar powered street lights and a street reflective of the many cultures in Richmond and San Pablo. Fernandez said her goal is to create a better future for her kids and future generations.” 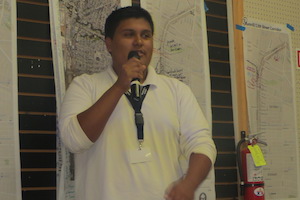 “I have to risk my life sometimes just to cross over,” he said. He recommended installing crosswalks every four or five blocks.

Growing up in San Pablo Hernandez said he has experienced violence and the love of community. “I’m happy we’re coming together as a community to make it right,” he said.

The project is not expected to be implemented for years, but the fire has been ignited and the community has responded to the call.