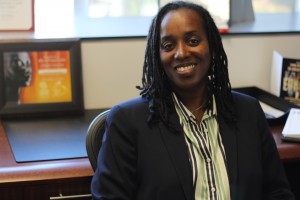 Recently, I came across some of the rhetoric that has taken place in the Richmond City Council.

I saw on Youtube that Councilwoman Jovanka Beckles was chastised and made a mockery of for wearing an African head wrap at one of the city council meetings. What bothered my heart was that some of the sardonic remarks came from other African brothers.

A brother and minister, Wesley Ellis, is seen in the video recording of that night placing a handbag on top of his head as a joke towards Beckles’ African head wrap. Then to add insult to injury Mr. Ellis is greeted by Richmond resident Mark Wassberg with laughter and a high-five.

I don’t expect a person like Wassberg to embrace our African culture. In that same video he is recorded saying to Beckles, “This is what happens Beckles when you wear that tight funny hat around your head, your brain cells get blocked.” Other times he’s been quoted as saying to Beckles (who is openly gay), “Gays have no morality…You’re filth, you’re dirt.”

What stood out for me was that nobody stood up for this sister.

Politics aside, whether you support her political views or not, whether you like her personally, or not, we should not allow anyone to poke fun of our culture.

It was a poor example of leadership and a disgraceful representation of Richmond for the rest of the world to bare witness to. I placed it on par with the stupidity of some of these reality shows on television, with all the drama. I thought “How could people in leadership positions who are to make decisions for the citizens of Richmond, possibly have the city’s best interest at heart while displaying loathing characteristics? How did they allow it to get so ugly that the media catches wind of it?”

Beckles is often critisized by some in Richmond for not being “really black.” In an SF Gate article council member Corky Boozé is quoted as saying  “she says she’s a black Latina. Well, you’re either African American or you’re not.”

The question I found myself thinking about after reading the article was, “What separates us who are of African decent, whether we live in United States, Brazil, Cuba, Panama, Haiti, Barbados, Jamaica, Puerto Rico, Dominican Republic or other Caribbean islands?” I’ll tell you: A boat trip.

Not all of our ancestors were dropped off here in the New World (United States). The middle passage consisted of a three-legged system known as the “triangular trade.” The triangular trade started from Europe as its first leg and on to Africa as its second leg where they kidnapped people and forced them onto a ship before dropping them off to the America’s—leg three, a life of enslavement.

Aside from the boat trip, where our dichotomy lies, is language, which creates further divides us.

Africans here speak English because it was the British who controlled the slave economy in the United States. The same goes for Africans who speak Spanish as a native tongue. It’s because their overseer was from Spain, and through colonization, the native African tongue (language) was stripped from us. As well as our names, culture and the like. The Portuguese, the British, the French, the Dutch Empire, Spain, and so on, all had their hands in the African slave trade.

I point this out so one won’t be fooled by someone else’s accusations of some one not being “Black” because they come from one of the island’s and may identify themselves as “Afro-Latin.” That identification is no different from someone saying I am “African-American” because they were raised here in America.

Beckles did not need to expound on why she wore an African head wrap (it was in solidarity of the 200 Nigerian girls that were kidnapped). We should not have to feel the need to explain to anyone why we may wear something that identifies with our African culture.

We of African decent should not be ashamed of our history and culture. We should hold our Maafa (Kiswahili for African Holocaust) sacred.

Until we educate ourselves, and our children, by reconditioning the mind, we will continue to suffer from “divide and conquer” syndrome.