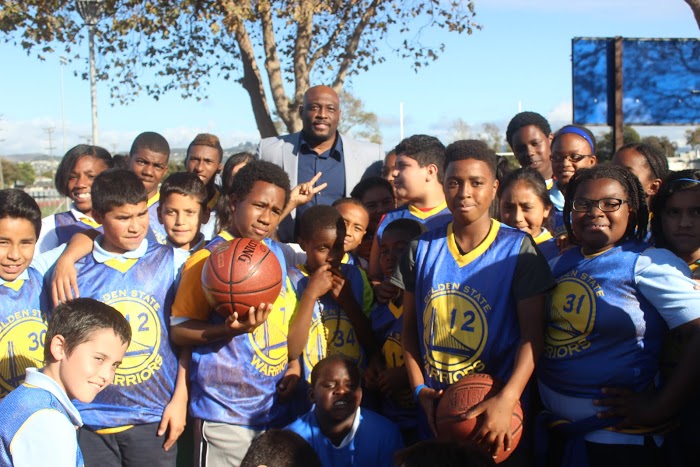 08 Nov Warriors Give Nystrom Community a New Place to Play

Story and Photos by Chanelle Ignant

“All we had left were the courts here that had cracks [and] the backboards were small and old,” Walker recalled. “We didn’t have nowhere else to go around here that’s not in someone else’s neighborhood.”

On Oct. 20, Walker and over a hundred other community members attended the unveiling of two radically different courts in their backyard. 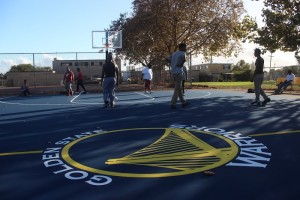 Featuring four new NBA plexiglass hoop systems and a 14,000 square foot all-weather acrylic playing surface, the renovations came about through the work of the Nystrom United Revitalization Effort (NURVE), an initiative launched in 2002 to address the needs of the Nystrom neighborhood. The renovated basketball courts completed the effort to revitalize MLK Park. The courts are next to the Oakland Raiders themed football field, completed in 2011, and the Oakland A’s baseball field—opened earlier this year.

“What the Warriors did here was just phenomenal,” Jim Becker of Richmond Community Foundation said.

After an Oakland Raiders football field’s renovation and an Oakland A’s baseball field done earlier this year, Becker reached out to Jose Gordon, Executive Director of the Warriors Foundation with the idea of involving the Warriors in the rebuild of the outdoor basketball court. Gordon loved the idea.

According to Becker it’s the only instance in the country where all three major sports teams have helped build a neighborhood park.

“Playing sports was my everything,” said Mitch Richmond during the unveiling ceremony. On the court is where he said he learned the value of teamwork and dedication.

Following the ceremony the Warriors Foundation led a basketball clinic with students between the ages of 10 and 12 from Richmond College Preparatory and the Police Activities League.

Christina Baronian, a sixth grade teacher at Richmond College Prep, said that with the limited space at her school the new court offers a place for her students to go after school.

“This park was always a dangerous park to go,” Baronian said. “A lot of their parents wouldn’t let them come here because it was so dangerous. And now that they’ve fixed up this court and the other field my students are going to be able to come here now, which they’re really excited about.”

Lynette Walker, who lives nearby came to the event and said she hopes the refurbished courts will attract more players.

“For years we would come out here and play and no one would be out here,” she said. “Now that they fixed it up I really think that a lot of people will be encouraged to come back and play.”

“We would like for the community to take ownership of this,” Holland said. “We want them to feel like this is ours. We all did this together.”