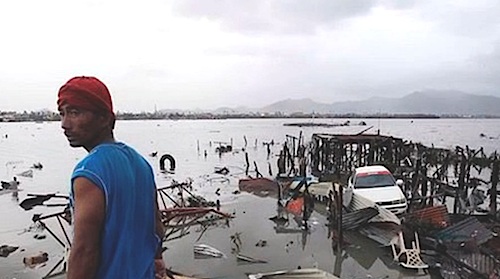 Posted at 23:58h in Environment, Immigration by Pulse Editor 0 Comments

SAN FRANCISCO – As government officials and climate experts from around the world meet this week in Lima, Peru for a U.N. climate conference, tens of thousands worldwide have already been displaced by the effects of climate change.

Some have remained within their country of origin, while others have fled across borders or even oceans. Experts on global migration patterns warn that while the number of cross-border “environmental migrants” is certain to grow, there remains little to no legal framework for absorbing them.

“For those displaced across borders, there is nothing beyond general immigration and human rights law,” explained Elizabeth Ferris, director of the Brookings-LSE Project on Internal Displacement.

Her group is currently working with the UNHCR and Georgetown University to “develop guidance for governments on how to plan relocations made necessary by the effects of climate change.”

Ferris said that for the millions of internally displaced – those who have been forced from their homes but remain in their country of origin – there are international agreements in place, including the Guiding Principles on Internal Displacement, that while non-binding do provide some measure of predictable support.

Data show that in 2010-2011, there were some 42 million internally displaced people in Asia alone, the majority victims of natural disasters including storms, droughts, and sea rise.

But for cross-border migration driven by climate-related disasters, the legal landscape remains far murkier. Such migrants do not fall under the UN Convention for Refugees, for example, which only extends to those fleeing persecution on the basis of race, religion, ethnicity or political affiliation.

To date, humanitarian aid agencies have only gone so far as to agree on the term “environmental migrant.” It is one of a number of terms – including “climate refugee” and “environmentally displaced person” – that have been used going back as far as 1976.

Advocates hope that by highlighting the nexus between climate change and global migration flows, such terms will help to expand existing refugee laws.

And that will be critical, they say.

Even assuming nations can reach agreement on slashing greenhouse emissions by up to 70 percent in 2050 – one of the goals of talks in Lima – forecasts for the number of people displaced by extreme weather events in coming years still hover in the hundreds of millions. The Organization of International Migration, which tracks global migration patterns, puts the number somewhere around 200 million by 2050.

Those who study climate-related migration say the majority of environmental migrants are likely to come from poorer countries in the developing world. For that reason, they say, it can be difficult to determine whether someone is a climate refugee, as opposed to an economic migrant fleeing poverty.

That is already the case for the growing number of migrants in the United States from parts of Mexico and Central America.

Leoncio Vasquez is the executive director of the Binational Center for the Development of Oaxacan Indigenous Communities (CBDIO) based in Fresno. He said that for decades now Mexican indigenous populations like the Purepechas from Michoacán, or the Mixtecos from Oaxaca, have faced intensified drought and desertification.

“But they can hardly use those words to explain their reasons for coming to California,” he said.

Indigenous Oaxacans, many of whom are undocumented immigrants, are currently the fastest growing farmworker population in California. CBDIO estimates that at least 120,000 have abandoned their land to resettle in areas around San Francisco, the Central Valley and Los Angeles. Many end up working mainly in fruit crops like grapes, apples and strawberries.

Vasquez cited a mix of factors behind their plight, including economic and trade policies like NAFTA (North American Free Trade Agreement).

“The corn, beans and coffee planted by indigenous farmers can’t compete with subsidized U.S. products,” he said, adding that the Mexican government has stopped providing fertilizer for crops, while the land itself is becoming less and less fertile.

“All of that means one thing for these communities: poverty.”

One year ago the Philippines was devastated by super-typhoon Haiyan, which claimed more than 6,000 lives and displaced millions more. The ripples of that catastrophe are still being felt – even as another super-typhoon is now threatening the same region.

“[Typhoon Haiyan] affected the livelihood of fishermen, of farmers in the coconut fields … rural infrastructure was wiped away,” noted Lillian Galedo, executive director of Filipino Advocates for Justice (FAJ), an Oakland-based non-profit that works on behalf of the local Filipino community. She said the Philippines was still in the process of relocating 2 million people affected by the storm.

Just this month FAJ launched a campaign pushing the federal government to grant Temporary Protected Status (TPS) to undocumented Filipinos in the United States. Galedo says that would allow them to work legally and send remittances home that could help in reconstruction efforts.

TPS is granted to individuals from countries unprepared for the return of nationals due to temporary conditions resulting from war, epidemics or a natural disaster. In the 1990s thousands of Central Americans already in the United States received TPS in the aftermath of Hurricane Mitch and ongoing civil wars in Nicaragua and El Salvador. Their status is set to expire next year.

Galedo said many in her community were hopeful that President Obama would extend TPS to undocumented Filipinos as part of his executive action announced two weeks earlier, which he did not do.

“We were very disappointed,” she said.

Mari Rose Taruc is an organizer with the Asian Pacific Environmental Network, which is helping to fund the FAJ campaign. Filipinos need better jobs and to be protected from deportation,” she stressed. “Sending [them] back to typhoon ravaged areas is not the answer.”