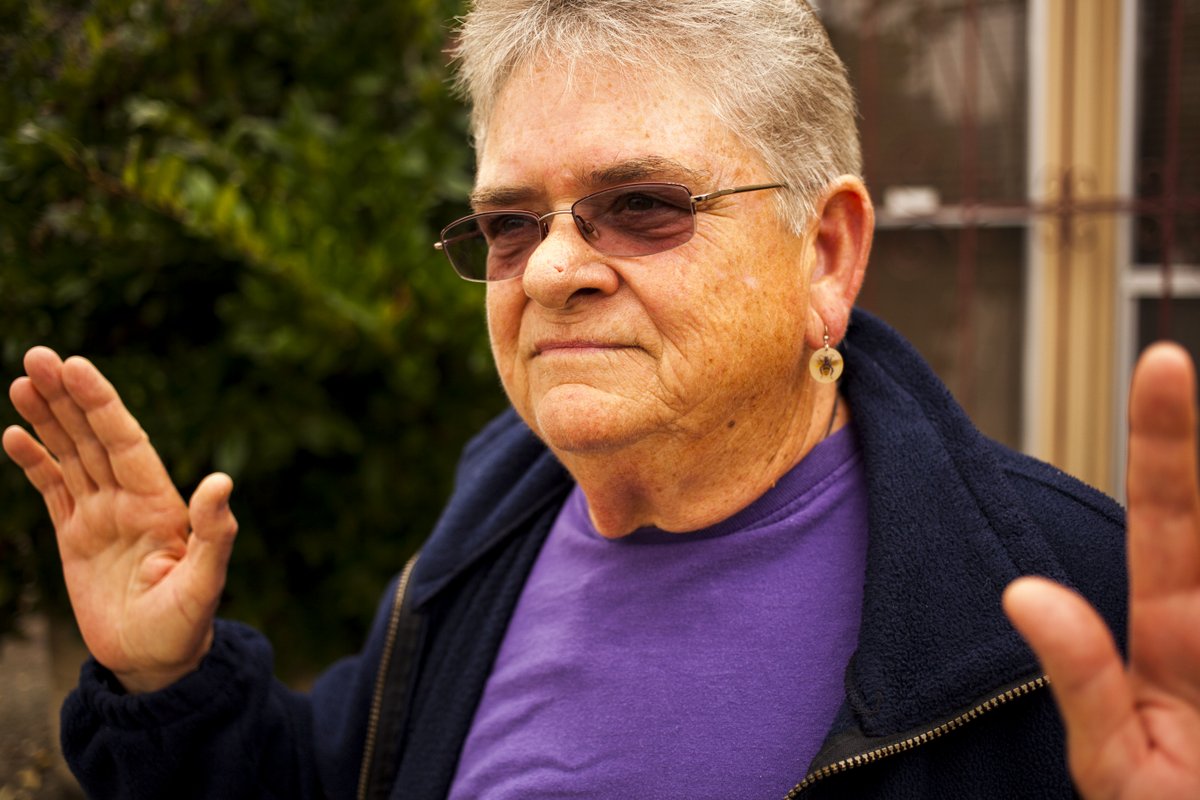 On a Tuesday morning in December, Richmond saw its first demonstration against police brutality and the killing of black and brown people at the hands of police. The RYSE Youth Center in Richmond spearheaded the event, bringing out over 200 people, who stood in-line down MacDonald Ave. from 41st to 39th street, holding #BlackLivesMatter signs and chanting “Hands Up, Don’t Shoot!”

The solidarity demonstration came weeks after the failed indictment of police officers in the Michael Brown case in Ferguson, Mo. and the Eric Garner case in New York. It was an addition to the movement occurring around the San Francisco Bay Area and nation.

Led by Kimberley Aceves and Kanwarpal Dhaliwal, co-founders and directors of RYSE, the center’s staff swiftly organized the event, galvanizing supporters through personal networks and social media, calling on residents, families and local organizations to stand in solidarity.

“We have felt the impact locally of what’s happening on a national scale,” said Aceves. “Our young people continually feel victimized by systems that don’t meet their needs. We felt it was critical for Richmond to show that we are standing in solidarity with a movement that is about ‘Black Lives Matter’ and recognizing that people of color have been pushed down for too long, and this community is standing up against that.”

At the start of the event, participants signed up at a table and tied a black armband on before heading out to line the avenue. The demonstration lasted four and half hours — between 10 a.m. and 2:30 p.m. — representing the number of hours Brown’s body laid on the street when he was killed in Ferguson.

It was a cathartic experience, drawing a diverse range of residents and city officials, including young and elderly people of color.

Mini Myers, 26, joined the line after watching it form from her apartment. “I don’t want to be a bystander,” she said. “I don’t want to remain mute. Too many black lives are being lost. It seems like there is a war against people, and police officers, in my opinion, are not being held accountable.”

Trevor Rogers, a 25-year-old North Richmond resident, said he joined the line to take part in the movement in a meaningful way. “People around my age all they really do is post things on social networks, they don’t really put forth the effort to come out and actually show their face or put in some ground time, so that’s my reason for being out here,” he said.

For Janet Muñoz, 25, her participation was a continuation of her efforts to see an end to the criminalization of people of color. “I have been protesting since before Oscar Grant. I have been involved because it hits me hard. Everybody just allows this and we are too comfortable about it. We shouldn’t be comfortable” Muñoz said.

One of the surprises during the demonstration was the arrival and involvement of Richmond’s Police Department, who stood in line side by side with demonstrators. Police Chief Chris Magnus held a sign that read “#Black Lives Matter.”

Photos of RPD officers, who as a department have been celebrated for effective community policing, went viral on social media, including RPD’s Instagram page. Images of Magnus and Deputy Chief Allywn Brown at the demonstration saturated networks and became a trending topic.

Magnus was lauded by many for his symbolic support of black lives, but, the Richmond Police Officers Association criticized him for participating in the event while in uniform—which they said crosses the line. According to California government code officers cannot participate in “political activities of any kind while in uniform.” Magnus, for his part, has maintained that the sign he held and the event weren’t political in nature.

Despite the overwhelmingly positive reception of RPD’s participation, a few demonstrators noted that the relationship between black and brown communities with officers in Richmond is far from perfect.

Maria Hernandez, 50 and a mother of two Latino sons, said she knows many undocumented people in Richmond that continue to distrust the police because of their history with Secure Communities, a federal immigration deportation program that relied on local law enforcement to build a growing database of undocumented people. RPD stopped participating with Secure Communities in 2012, but from 2010 through 2012 Contra Costa County deported over 2,000 people—most of them in the Bay Area.

“Our relationship with police is one of fear because we don’t have papers,” Hernandez said. “If they stop you, they take away your vehicle. And for many families, their car sustains the family. We have to keep protesting so the police do a better job at respecting the community.”

Phillip Burns of Vallejo said he appreciated the police presence, and noted that the failed indictments of police in cases of officer involved killings are a systemic issue that needs to be addressed. “The system is the problem,” he said. “There still is white privilege, and I feel we are targeted.”

Lt. Bisa French of RPD joined the line to show that she, and the department, stand for accountability. “I recognize there are things that are going wrong with police departments across the country, but I also want to show that bad officers are not representative of the entire police force,” French said.

According to French, the RPD supported community safety by raising awareness over their non-compliance to federal immigration practices and, most recently, requiring every officer to wear body cameras. French said she expects body cameras will increase transparency.

However some say that body cameras worn by Richmond police does not guarantee accountability.

“As we have seen video cameras mean nothing,” said Richmond resident Muñoz. “You see it with Eric Garner’s case, it means nothing. The proof is right there, clear as day.”

“What we need is to not give them power,” she added. “Prosecute them as any other person who bleeds red,” she said. “They are not above us, they abuse their power.”

RPD experienced it’s first officer involved killing since 2007, earlier this year when an officer shot and killed Richard “Pedie” Perez, 24, in September. The District Attorney’s office is investigating the shooting, per protocol.

“It’s just sad,” said Muñoz of the on-going killings nation-wide of black and brown people at the hands of police. “Sometimes I want to fight back and another morning I wake up talking about peace and love, but neither one of those is getting us anywhere,” she said.