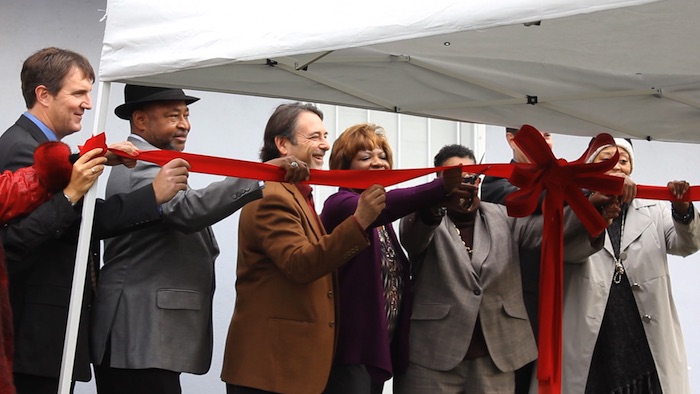 24 Dec Grand Opening of Transitional Home for Women After Incarceration

Posted at 15:31h in Neighborhoods, Re- Entry by RPadmin 0 Comments

A new facility in North Richmond will offer women coming home from incarceration a stable living environment, a chance to begin rebuilding their life and for some the opportunity to reunite with their children.

The Naomi House, located on Fred Jackson Way in North Richmond, is a two unit duplex which will operate as part of a one year transitional housing program for up to six recently incarcerated women and their children.

A ribbon cutting ceremony themed “Home for the Holidays,” held on Dec 17, marked the opening of Naomi house and a fresh start for two of its first occupants.

Originally from Tennessee, Aesha Johnson grew up in Oakland and is one of the first women to move into Naomi House. On the day of the ceremony Johnson was all smiles as she boasted, “this is my room” while standing inside one of the empty bedrooms in the house.

Johnson, 36, was recently released from jail after spending ten days locked up for her role in a burglary.

“I was actually trying to handle business and the way of doing that was to do something that I didn’t really want to do, which was drive my car while people steal things from the store,” Johnson said, “and I got caught.”

Johnson said her four children were taken away from her by Family and Child Protective Services. While locked up with a heavy heart she met one half of the founding team of Naomi House, Dr. Edwina Perez-Santiago.

Together with Belinda Thomas, Perez-Santiago founded Reach Fellowship International, a local non-profit that provides job-training services, housing referral/placement, family-reunification services and life-coaching to formally incarcerated women. Naomi House is an extension of those programs and was built in partnership with a number of different public agencies. The house belonged to the Contra Costa County Housing Authority and was boarded up for years before Reach took it over and remodeled it with a low-interest, $242,250 loan from the county, secured with help from Contra Costa County Supervisor John Gioia’s office and the Community Housing Development Corporation.

Perez-Santiago, formerly incarcerated herself, said the vision for Reach was to ensure that women would get the services they needed in a safe environment where they can also connect with and support other women.

“It’s taught inside the county jail,” Perez-Santiago said of the program. “We are saying women matter and that we want to work with you to make sure that you live a productive life, and that’s what this project is about.”

“When I first me her, I got this kind of vibe from her, you know, and it made me really feel like I knew her and that I could trust her,” Johnson said. “So I kind of went along with that vibe. That led me to here and I know it is going to lead me to bigger and better places.”

“If I get me together all the way then there’s nothing stopping me from taking care of my kids like I need to,” she added. “I’ll be on my feet, they’ll help me get a job, maybe even counseling. I just feel like I’m getting everything I need here.”

Being a part of a community is something Perez-Santiago believes is essential to women like Johnson, who are entering society from incarceration. And it’s part of why Naomi House is located within North Richmond.

“Rather than putting them somewhere out in some kind of forest, we wanted to find a place in a community, where a school is coming, where the supervisor has high expectations of how this community is going to change and how it’s going to look,” Perez-Santiago said. “We have women of all cultures, age, different ethnic backgrounds but they’re in the same boat, and they want to have a better life.”

Courtney Moore, 26 from Vallejo, will also be living in the house. She was recently incarcerated for eight months for identity theft, but she said she’s “planning to change my life.”

“Housing has been hard to find because I really didn’t know where to look when I first got out,” Moore said. “I want to be more self-sufficient. Living with my parents I kind of get enabled, and I haven’t lived with them for a long time. So this chance now to do this on my own, clean and sober, is a new chance for me.”

Moore has been dealing with the realities of life after incarceration, most notably finding a job and, eventually, a career.

Perez-Santiago’s hope is that Naomi’s House will give Moore, and the women who come in like her, the space and time to figure things out and move forward in life.