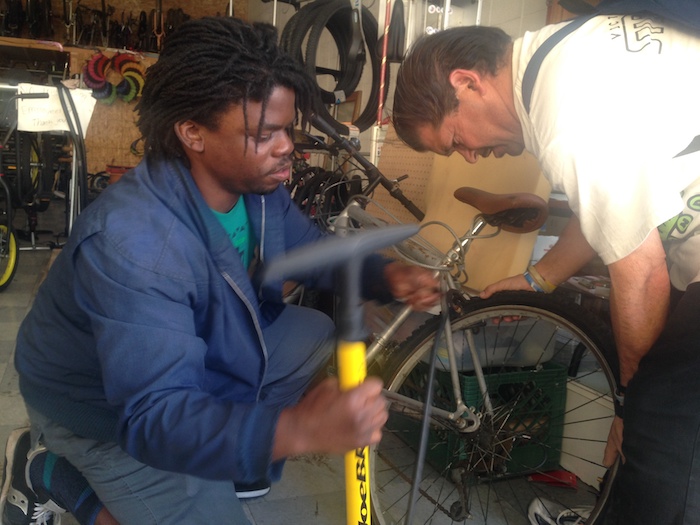 Posted at 13:04h in Arts and Culture, Business, Health by RPadmin 0 Comments

When Matthew Schwartz moved to Richmond earlier this year, he noticed the city offered plenty of miles to bike, but no shop where he could take his bike parts and build a bicycle.

Buying a new bike didn’t quite fit into his budget, so he was forced to rely on public transportation.

But as he walked his normal route to the Richmond Bart Station one morning, Schwartz noticed a vacant building on Macdonald Avenue had transformed into a bicycle shop. He stepped in and owner Najari Smith assured him they could rebuild his bike and get him pedaling.

“When I came in here, these guys were really nice and I knew this was a total mom and pop operation I wanted to support,” Schwartz said. “I had bicycle parts but I didn’t know how to put them together.”

Rich City Rides Community Shop, which opened in September at 1500 Macdonald Ave., sells refurbished kids and adult bicycles, accessories and supplies and offers repairs. Bicycles range from $20 to $60 for kids and $50 to $300 for adults.

There is just enough room to walk between the rows of dozens of bicycles that crowd the spacious shop. Inside is everything from tricycles to bikes for the more experienced cyclist. There are cupboards full of bicycle parts and wheels hanging from wooden shelving. Repairs are done in the back of the shop.

The shop’s location is prime, Smith says. It’s a block from the Richmond BART Station and the area gets a lot of pedestrian traffic. It’s the only bicycle shop in the city after Richmond Spokes closed in 2013. The closest bike shop is in El Sobrante.

“For a bicycle shop it’s a great location,” Smith said. “If you get a flat tire you can get on BART, get off at the last stop and walk one block to a bike shop that can help you. There are community events that happen right here that bring people in.”

On a recent Monday afternoon, a stream of people trickled in, some were browsing for a new bike, or inquiring about replacing a part. Others were just curious about the new shop.

“A new bicycle shop in the hood. I sure am happy you’re here,” one passerby told Smith, who smiled and told the potential customer what the shop offers.

The bicycle shop is an extension of the nonprofit Rich City Rides that Smith launched in 2012. He started the bicycle advocacy nonprofit by repairing bikes on the Richmond Greenway. He shadowed neighborhood mechanics, picking up whatever skills he could. Smith later partnered with bicycle mechanics that embraced his concept and formed a staff to sponsor monthly bike clinics, offer valet bike parking at community events and pop up bicycle repair classes. The nonprofit receives its funding from the East Bay Bicycle Coalition and relies on community support and volunteers.

“When I first started one of the things I first noticed was that people in Richmond didn’t ride bikes,” he said. “There was this perception that the only people that rode bikes were homeless folks and crack heads. People didn’t want to ride if they thought that was the perception. So I wanted to change the perspective and really allow folks to understand the benefits of riding bikes.”

Starting in January, the shop’s staff will host an Earn-a-Bike program where kids ages 8 to 16 can work at the shop and, after completing 25 hours, get their own set of wheels. The kids will shadow the mechanics, restock the inventory and learn the ABC’s of bicycle safety — everything from the rules of the road to how to properly secure a bike so it’s hard to steal. Smith is hoping to feature a similar program for adults.

“I believe everyone should have a bike,” he said, “and all parts of the community deserved to be helped.”

Smith’s latest venture is the bike recovery program, an initiative he thought up after his bicycle was stolen in San Francisco. With photos and a detailed description of the missing bike, the Rich City Rides staff uses social media and word of mouth to try and recover it. Cyclists can also register their bikes at Rich City Rides for $5, which makes it easier to recover, Smith says.

So far, they’ve recovered six this year. Most were just brought back, and there’s never been a case where the police needed to be involved.

Despite its expanded bike lanes on major thoroughfares and 32 miles of bay trail, Richmond is not known for being bike friendly. Motorists are still trying to adapt to sharing the road and cyclists don’t always feel comfortable riding in certain parts of the city. It’s something Smith is working to change.

Since 2012, Rich City Rides has sponsored more than 30 community bike rides, as a way to get people comfortable riding through Richmond’s streets and to build camaraderie among cyclists.

Marilyn Langlois, an avid Richmond cyclist and a founding member of the city’s Bicycle/Pedestrian Advisory Committee, said the city’s bike culture is changing.

“More Richmond residents are riding bicycles for a variety of reasons,” Langlois said. “The health benefits, it’s cheaper than driving a car and we all are trying to become more environmentally conscience.”

Smith says he’s excited about the future of the shop and hopes to use it as a community space and a way to continue to get more people cycling.

And customers are thrilled too. When Schwartz stopped by the shop recently to check on the progress of his bike, he couldn’t wait to take it for a spin.

“I knew they were going to do something nice but this really exceeded my expectations,” he said. “It was in so many pieces for so long, but now to see it all put together, I’m real excited about that.”