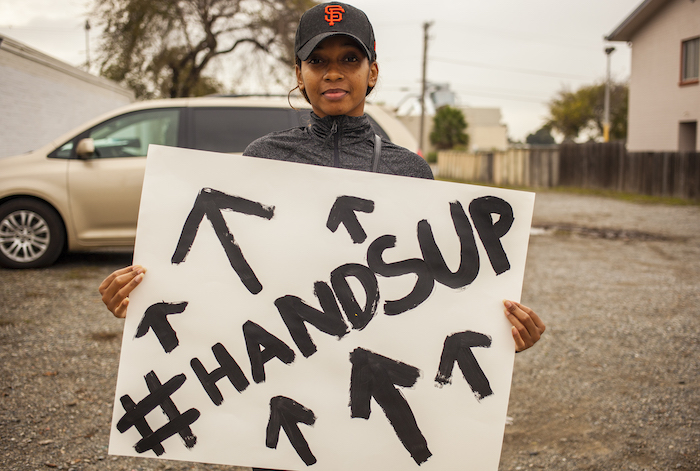 07 Jan Thoughts on Ferguson Protests: How Young Adults Feel About a National Movement

Posted at 14:02h in Commentary, News, Youth by RPadmin 0 Comments

EDITORS NOTE: Richmond Pulse asked young adults what they think about the nationwide protests against police brutality sparked by the killing of Michael Brown in Ferguson, MO., and if they believe anything will change.

Initially, I was not inspired by the protests occurring around the country. They were portrayed in the media as unorganized, chaotic, and dangerous. While I felt strongly about the subjects that were being protested, I did not want to participate in any event that alienated groups of our communities, and put those who chose to be there in danger. Soon after, peaceful protests were sprouting all over the country, and I felt that was an invitation to participate.

I attended the “Million’s March” in Oakland, with my mom and 10-year-old brother, and had a beautiful experience. It was inspiring to see so many people of all ages and abilities present and complying with the requests of the organizers. There is power in numbers, and if there is space created for everyone to join in solidarity, I believe some real change can occur in this crucial time.

The protests inspire me because people are making noise about something that really matters. Government employees should not murder people. In my opinion, they should not even have the equipment that allows them to do it so easily. Michael Brown, Eric Garner, and many other Black adults and children have been murdered by police officers. Their deaths were preventable.

People can be taught to see each other’s humanity. The protests call national attention to police brutality, increasing the likelihood of helpful reform, and the protests mean that more people are informed on this issue. Hopefully future juries will make better judgments.

As an American citizen, my opinion stands that those granted the duty of protecting and serving us do not have the right to take our lives unwarranted.

No one deserves to die over swishers or shoplifting from a store, and we need to address that. The police have gotten lax, when it comes to misconduct and professionalism. We have allowed them to brutalize people in the name of justice. It reaches a point to where we draw the line. Where we hold people accountable morally, and not based on their job description. Since the protest, I have been inspired to learn more about my African heritage and how we gained a hatred for each other. I think that’s the solution, treating each other like gods will result in a godly outcome.

We need to look at the black community as a whole and how we treat one another. It’s easy for us, to stand up for police brutality but remain silent in regards to black on black violence and genocide within the inner city.

We should celebrate one another, that’s something I’d like to see, blacks loving blacks, blacks supporting blacks and an end to black on black brutality, one love brother.