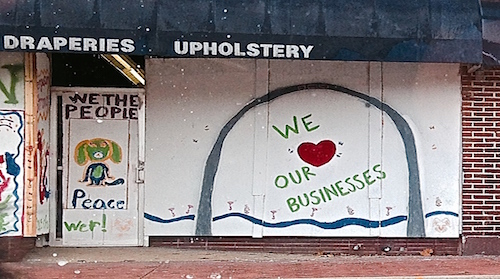 13 Jan The Desolate Streets of Ferguson

FERGUSON, Mo. – The protesting crowds have thinned. The 24-7 news army has packed up its equipment and moved on to the next hot spot. But Ferguson is still simmering.It’s breathtaking enough walking through the business district along Florissant Ave. to see one storefront after another still boarded up either because of broken glass or as a prevention against vandalism or looting. But that scene does not ready my companion and me for the devastation a few streets over on West Florissant Ave., the epicenter of the worst violence in the wake of the non-indictment of police officer Darren Wilson for the deadly shooting of unarmed teenager Michael Brown.

The destruction stretches for nearly a mile on both sides of the wide avenue. I see for the first time the extent of the spillover rage that the TV cameras somehow did not fully capture. There’s the Walgreens, the McDonald’s, the Little Caesars, the Phillips 66, the Toys R Us, the local beauty salon, the local auto shop, the local diners — all torched, with smashed windows and dumpsters in the parking lots used to throw away the burnt, wet, broken debris of those chaotic nights in August and then again in November.

A National Guard armored vehicle rumbles down the avenue. Another is parked near an underpass. Police cars are tucked in business driveways throughout. A large lit up construction sign declares that a key intersection in the area will be closed after 5 pm that day. It’s the intersection where protestors gather nightly.

Meanwhile, the citizens of Ferguson try to go about their daily lives. They walk the streets to the boarded up grocery store for the day’s ingredients or to the deli for the day’s coffee. An artist advertises his upcoming CD release party.

Flashbacks to my growing up in a military dictatorship in Lima, Peru pop up for me. This is what a State of Emergency looked liked. The surreality of the mundane of day-to-day life against a backdrop of militarization, physical destruction, deep distrust, and a feeling that further conflagrations lie just below the surface.

At the same time, just as Mother Nature revels in the green shoots that suddenly emerge here and there in a vast expanse of forest decimated by a massive wildfire, there are signs of resilient hope surrounding the armored vehicles, cop cars, and burnt out and boarded up stores.

Nearly every single plank of protective plywood nailed to storefront windows were tagged by peaceful protestors with messages of affirmation. Ferguson Strong. Keep Calm and Pray On. Peace in Ferguson. Natalie’s Cakes and More [Is] Open. Love More. Love is Blk + Wht.

Hundreds of ribbons with more messages of hope and affirmation are tied to wrought iron fences along the avenue. They flutter in front of desolate burnt out buildings as well as a neighborhood school where the students are back at their desks.

I’m in town to meet the Chief Diversity Officer for a national corporation with headquarters on the edge of Ferguson. She tells me about various inclusive events her organization is proud of having conducted inside corporate walls. But just down the street, the still-shuttered restaurants, shops, and bars speak to a tense reality facing the citizens of metropolitan St. Louis who walk through her company’s doors every day. She sees an opportunity for healing dialogue that she has been testing in one-on-one conversations, though she has yet to figure out the best way to go about it organizationally.

She understands the fragility of it all; but also the need to keep pressing on in bringing a torn community together. The task feels enormous since it’s not just about Ferguson but about the still very unfinished work of racial reconciliation and inclusion in America.

But as the positive graffiti and ribbons testify, it can also be brought down to a simple message:
“Peace and Justice are two sides of the same coin.”

And these require a people and a nation who care. Do we and can we?

Andrés Tapia is Senior Partner at Korn Ferry, a global leadership and talent consultancy. He is the author of “The Inclusion Paradox: The Obama Era and the Transformation of Global Diversity.”