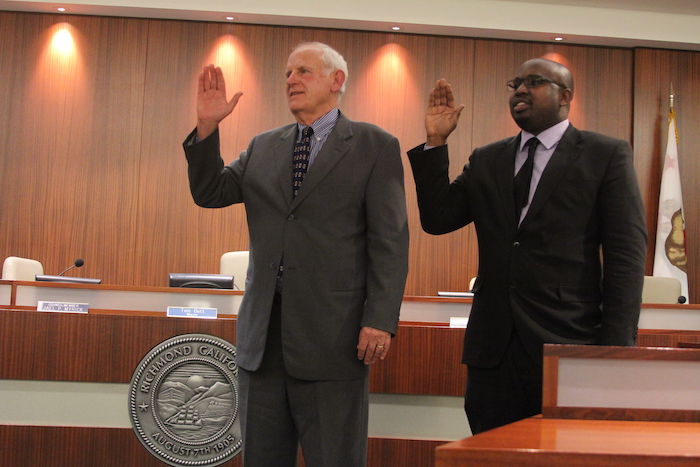 Posted at 08:57h in People, Politics by RPadmin 1 Comment

It was all smiles in a packed house at the Richmond City Council chambers Tuesday, where newly elected Mayor Tom Butt and a handful of council members were sworn in. Notable among the faces was California Lieutenant Governor Gavin Newsom, who gave the oath to Butt.

The festive atmosphere – after years of contentious battles behind these same walls – was a welcome breath of fresh air for city leaders and could point to a fresh start in local politics.

Butt replaces outgoing Mayor Gayle McLaughlin, whose progressive policies won her both friends and opponents in a city where racial and economic disparities abound.

Butt is widely seen as a pro-development centrist.

“He’s not always beloved. I read the paper,” Newsom joked to the crowd before the swearing in. “At least you know where Tom stands. Isn’t that nice? He doesn’t say one thing privately and another thing publicly. And I admire him. And that why I was honored and quick to get over here.”

Newsom added that he looks forward to working and collaborating with Butt. “I think the state’s vision can only be realized on the local level,” he said.

In his remarks, Butt thanked family, friends, his campaign team and even the reporters who covered the election and put him in the national spotlight.

“If my name had been Smith however, I know that Rachel Maddow would not have not taken interest,” Butt said, to laughter from the crowd.

“I’ve done this for 20 years,” he said. “People always ask me, ‘Is it fun?’ For many years, I’ve said, ‘No, it’s not fun.’ But the last six years, they’ve almost been fun. They’ve certainly been productive. They’ve been some of Richmond’s best years, I think.”

Outside the chambers attendees shared their views on what the change in mayor means for the city.

“Each mayor has their own strengths and weakness. I’m sure that they will come into play,” said Juan Reardon, a member of the Richmond Progressive Alliance. “We will get some good things from Tom Butt being mayor and perhaps we will miss a few things that Gayle had.”

“But I’m confident that the strong presence of Gayle and the progressives on the city council will help the new mayor reaffirm the direction that we want this city to realize, “ said Reardon.

Despite leaving her post as mayor, McLaughlin remains a presence as one of the city’s newest council members. She was sworn in alongside Jael Myrick, Jovanka Beckles and Eduardo Martinez.

The evening also marked the departure of council members Jim Rogers and Corky Booze. Both lost their seats in an election that will be remembered for the losses suffered by candidates tied to oil giant Chevron.

Antwon Cloird, founder of the local nonprofit Men and Women of Purpose, said he wants to see Mayor Butt embrace the whole community and engage with Black leaders on economic development for the Black community.

“He understands development and how it can affect our community. I think with the re-entry population, Tom will understand the needs and values of the whole community, though he’s often pointed out as a Point Richmond person.”

Point Richmond, on the western edge of the city, is a pocket of relative wealth in this largely working class city.

“Hearing the views of activists like myself, he’ll get a better picture of how to address the issues of the Black community and our bottom youth,” Cloird added.

Richmond resident and community activist Don Gosney believes the new mayor will move the city away from some of the more progressive policies pursued by McLaughlin.

“I don’t believe he will embrace the eminent domain issue the way [McLaughlin did], or some of the immigration issues. He will definitely have more influence in Sacramento and Washington DC,” said Gosney.

McLaughlin spearheaded a push to allow the city to make use of eminent domain laws to keep homeowners in properties on the brink of foreclosure.

Former mayoral candidate Uche Uwahemu says it’s not about whether the city becomes less or more progressive. “It’s really about creating opportunity for people,” he said. “I hope that this mayor takes it there. You can’t create upward mobility when there’s no opportunity. That’s really where I hope this new mayor will go.”

Richmond resident and elder statesman Betty Reid-Soskin sees a more balanced city on the horizon. “I think the city that has found its direction, and that direction is going to need more discipline. This Mayor is going to provide that. I think it’s all good.”