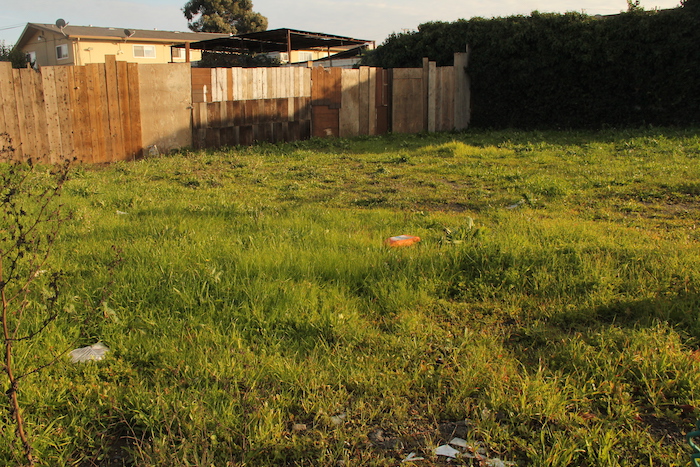 20 Jan Seeing Gardens in the Blight

Posted at 11:46h in Environment, Neighborhoods, Youth by RPadmin 0 Comments

Richmond is a city plagued with blight. While some areas are revitalized, too many lots are left empty throughout neighborhoods—standing out like gaps in a crooked smile.

While out on a walk down California Avenue, in the North and East neighborhood near Richmond High School, I passed three large lots in just a few blocks. They looked like they’d gone untouched for years; covered with weeds, garbage and old appliances.

Looking at them, I wondered, “What would happen if these lots were transformed into community gardens?”

Tim Higares, a code enforcement manager in Richmond, said the number of vacant lots is in the hundreds, and growing. But, he said there’s hope in the blight.

He cited the new community garden at Harbor 8 Park on the Richmond Greenway and the ongoing Mathieu Court greening project in the Iron Triangle as examples of efforts to beautify vacant, dilapidated areas.

“The city is in support of anything that will improve or stabilize the community,” he said.

“We would much rather see a beautiful green community garden than a ugly lot that’s full of trash and debris.”

Already some cities, and the state, have taken moves to support the idea of using vacant lots for growing food.

Last November the Oakland City Council approved changes to the city’s agricultural regulations to allow gardeners to grow vegetables on vacant lots and sell without a permit, as long as they receive permission from the property owner. And in 2013, California passed the Urban Agriculture Incentive Zones, which gave private landowners a financial reason to consider turning their vacant lots into a garden oasis: a lower property tax rate for those who allow their land to be leased for urban agricultural for at least five years. Unfortunately this new law isn’t applicable in Richmond because it applies only in urban areas with a population of at least 250,000 people—Richmond has around 110,000 residents.

Nevertheless, I would like to see Richmond’s vacant lots transformed this year. By allowing these spaces to be used for gardening, the community of Richmond could benefit with fresh vegetables, and an improved landscape.