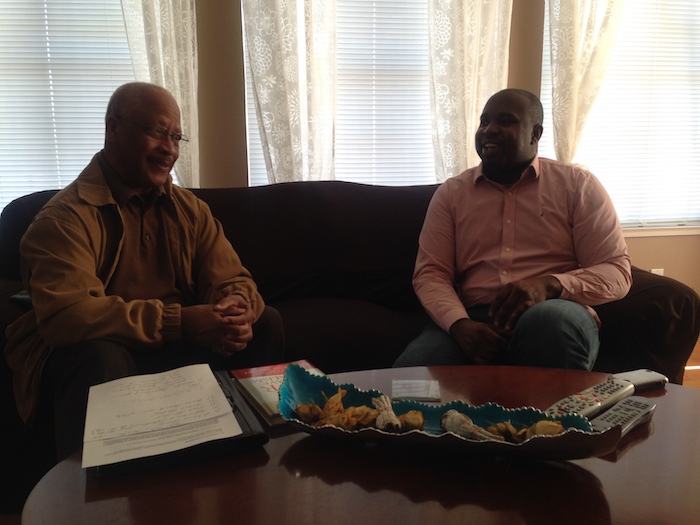 Posted at 13:46h in Politics by RPadmin 0 Comments

EDITOR’S NOTE: Incoming Chair of the Richmond Chamber of Commerce, Vernon Whitmore, sat down with newly elected councilmember Jael Myrick to discuss the council’s vacant seat, the prospects for district elections in Richmond and the future for Richmond Promise—Myrick’s pet project to help every Richmond youth go to college.

Vernon Whitmore: You won your recent election with a really high margin. Do you take that as a mandate of youth, mandate of political strength, or are you just happy that you won?

Jael Myrick: I do take it as a mandate. I think there are a few things that played into the margin. First of all, I ran with a lot of diverse support. A lot of people supported me that don’t usually support the same candidates and I think that’s sort of a big testament. And, I think some of that had to do with me—but I’m not naïve. Some of that had to do with who my opponent was.

At the end of the day, it does put me in a unique position to bring people together who wouldn’t otherwise be working together.

JM: I’ll give you a perfect example. There was a little bit of a controversy shortly before the election where these two different PAC’s (political action committees) came out, both with a version of the name “working families.” There was the “working families” PAC that ACCE and SEIU had put together and there was another “working families for jobs” PAC that the building trades had put together, all of whom were supporting me. Well one thing that I found interesting about it was these groups have more in common than they realize. They both want to make sure that UC Berkeley and LBNL (Lawrence Berkeley National Laboratory) treat Richmond with respect, and hire local and make sure that local individuals are able to take the most advantage. They both want to make sure we get some sort of community benefits.

I think one thing, if there was a clear mandate it was to try to get our council back to a place where it’s serious, where it’s deliberative, where it’s working on the issues. We may agree sometimes and may disagree sometimes, but we’re going to do it in a professional fashion.

VW:  Okay, so now after the election the talk of the town is who will the empty council seat. I’ve heard a number of names thrown out there. But, I’ve also heard that due to the Richmond Progressive Alliance faction maybe the best option would be a special election, even though it’d be costly for the city. Do you see the council going in that direction?

I’ve heard comments from other colleagues, including at least one colleague in the RPA who mentioned that she didn’t think we would end up needing a special election and I take that as a positive sign.

VW: Who would you like to see in that seat?

VW: Another thing that came out of this election that really kind of surprised me was the conversation about district elections, and how now is the time to implement them. What do you think about that idea?

JM: I’ve said this publicly; I am for, at least, exploring it. I don’t know that it’s the answer. It may work, it may not work, but I think it’s worth exploring.

Berkeley, which is similar is size, has had district elections for decades. I talked to a Berkley council member and we were comparing how much I have to raise to get elected to what he has to raise to get elected, and it was significantly higher for me because of how much it cost to run an election citywide, as opposed to in a district.

I’m not complaining about having to raise money but it does mean that there’s a bigger emphasis on fundraising in Richmond than in Berkeley.

And we often debate how to deal with campaign finance reform and you can come up with different plans to try to mitigate it, but the root cause is that elections are expensive. So, if district elections allow us to have cheaper elections than that means a number of things. It means, number one, the influence of money can be lessened, but it also means that candidates who aren’t necessarily backed by big groups—RPA on one side, or the business community on the other side — can have a better shot.

VM: That’s a good point, because since we’re in the same neighborhood (Santa Fe), you’re the only elected official at City Hall that sees what I see.

JM:    There were three councilmembers from Point Richmond, the most affluent neighborhood in the town, and nobody from Hilltop, nobody from Belding Woods, nobody from Iron Triangle, nobody from anywhere else in the south — in Santa Fe — except for me. There’s a question of fairness to that. I think there’s actually going to be two from the annex now because Eduardo lives in the annex and Gayle lives in the annex, which is another more affluent neighborhood. So you’ve got two from the annex, two from Point Richmond and we’ll see who gets that other seat. It begs the question of district elections.

JM:    I think there are a lot of issues where the city and the business community obviously have the same interests, in that we want a vibrant, healthy and successful city. Are we going to agree on everything? No. There are going to be issues where the business community, their interests, their bottom line, may be against what some of us on the council think is the right thing to do for our community. But that doesn’t mean we can’t talk, and that doesn’t mean we can’t have a relationship and work those those differences out and still have a good relationship on the issues we care about.

VM:  OK. Next, I want to talk about Richmond Promise, the exciting scholarship program for local students. What can you tell our readers, especially the youth, about it?

JM: Richmond Promise was an issue I ran on the first time, in 2012. We (the council) were successful in our negotiations with Chevron in getting them to fund it at $35 million for the next ten years, and that’s going to make sure that every young person in our town, over the next ten years, has money for college. The details are still being worked out.

VW: Have you taken any other steps, since securing funding, to develop it further?

JM: In November I went to a conference in Connecticut where we talked to a bunch of other city officials, who run similar programs, and learned from some of their mistakes and successes. What’s clear is each city is able to develop the program in its own way and make it unique to the needs of that community. The benefits have been enormous in many of these towns.

There’s all this potential benefit if we do it right here in Richmond and with $35 million to at least get started, we’ve got the potential to do it right.

Obviously a lot, a lot of details still have to be worked out. We’re going have to raise more money to make sure it’s sustainable and to make sure it’s implemented in a way where the most kids get the benefit.

The Richmond Promise sort of tells all the kids, if you live in Richmond we expect you to go to college. We expect you to get an education and have a long-term career and I think that’s the biggest part of it.