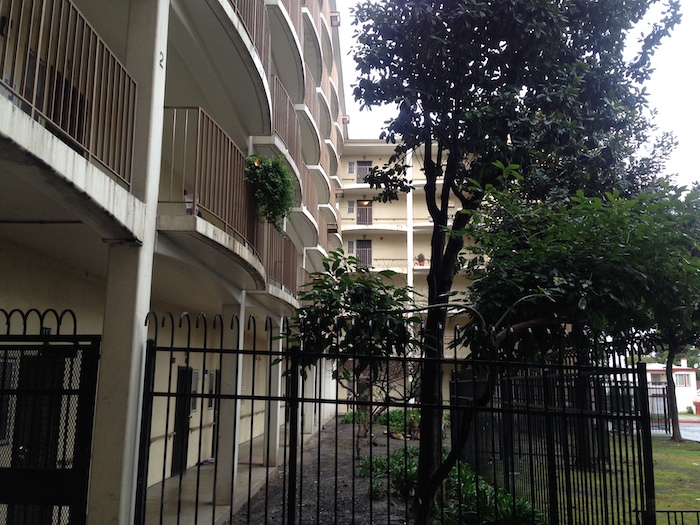 12 Feb Residents at Troubled Housing Complex to Soon Move Out

The news came a year after the Center for Investigative Reporting published a series of articles detailing terrible living conditions in the complex filled with mold, roach and mice infestations and leaky roofs. A month after the stories broke, the Richmond City Council voted to relocate residents, many of who are elderly and or disabled.

The vouchers, which were recently approved by the U.S. Department of Housing and Urban Development (HUD), will allow residents to move to other public housing structures or private market housing.

The Richmond Housing Authority will help residents with costs associated with moving, and has opened a relocation office to assist tenants with finding new places to live.

After all the tenants have moved out of the building built in 1966, the Hacienda will undergo around $20 million in renovations, paid for by HUD. Jones estimates the renovation will take 18 to 24 months to complete and current tenants will have the option of returning after it’s done.

“The residents of Hacienda were in dire need of safe and improved living conditions,” said DeSaulnier in a statement. “I am pleased to have assisted the City of Richmond in expediting the issuance of vouchers which will allow individuals and families to immediately begin finding and settling into a better housing situation.”

Sandra Burell says she has lived at the Hacienda a little over ten years. She says the last year has been difficult, “waiting, not knowing what their going to do, not knowing how long I’m going to live here.”

“I’m the type of person that believes in action,” said Burell after the press conference. “Now they’re actually doing something, and I’ve heard it from the horses mouth, so I’ll believe it.”

Burell says she would like to stay in Richmond, close to the area she’s in now. “Hopefully right around Kaiser. All my doctors are at Kaiser and everything is a walk away for me and I’m in the chair now,” she said, referring to her wheelchair.

“But not just last year,” he said. “This goes back to the relocation process that was happening in 2012.”

“There has been a few things changed,” said Williams. “They did the floor in here and they painted. You can change the comforter but if you don’t change the sheets your still going to get dirty,” he added, detailing the ongoing issues with health hazards that he said include rotting and mold growth on walls throughout the building.

Bernice Smith, a longtime Hacienda resident, said she’s heard promises of improvements at the Hacienda for years. “They been saying this for ten years,” she said. “I’ll believe it when I see it. They’ve disappointed us so much and I’m still paying rent.”

“What they say they’re going to do they don’t do it,” she added.

Edward Dunlap hasn’t lived in the building as long — just three years — but after losing a beloved dog because of, he suspects, the toxins in the building, he is ready to leave.

“I want to go somewhere else, I’m tired of this place,” he said. “All I want to do is live out my last days.”