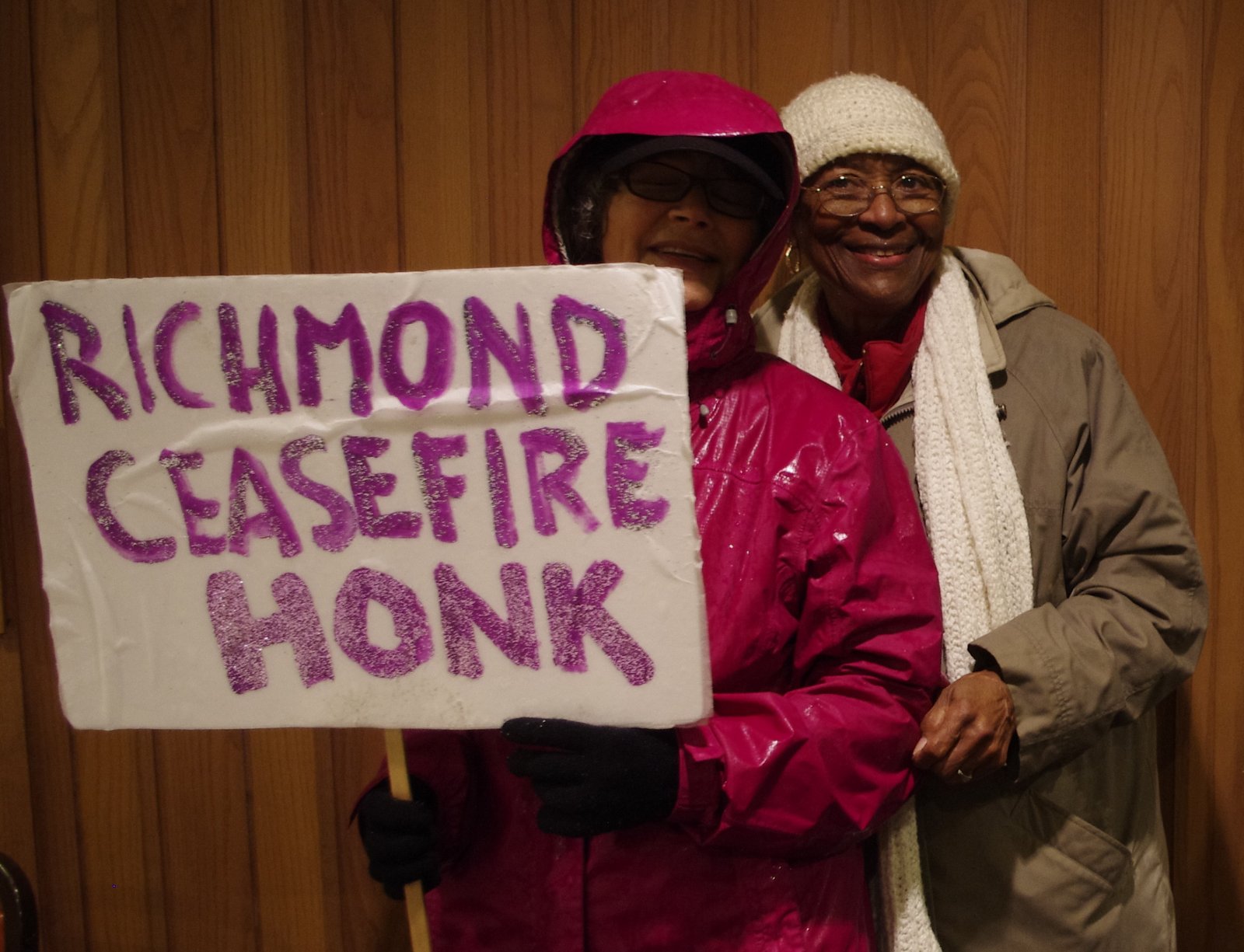 It was 7 p.m. on a Friday night and I was attending my first Ceasefire night walk — a weekly trek where members of the community walk together through streets where gun violence has occurred in the hopes of putting an end to it. In recent years Ceasefire has received a lot of credit for Richmond’s reduction in crime and violence, and I wanted to learn about their approach.

The night was dark and pouring rain, I was thinking maybe they’d call it off because of the weather. But, I figured I would at least knock on the door of the Bethlehem Missionary Church — the meeting point — in case anyone was there.

To my surprise, the door opened and I was greeted by a group of people sitting in a circle. The mood was palpably serious. Rev. Donnell Jones, Community Organizer for the Contra Costa Interfaith Supporting Community Organization, was telling them about recent deaths in the area involving gun violence. The men involved in the shootings were between 18 and 23 years old. “Babies,” Jones said, “robbed of the ability to dream.”

Jones explained the purpose of the walks and the strategy to end gun violence including “call-ins” where parole officers meet one-on-one with perpetrators, which has proven successful. Members of the group discussed the lengths they would go to get these youth help. Before we headed out, we gathered in prayer “for a generation of people that have been lost.”

After grabbing candles and signs reading a variety of things like, “Peace for Richmond” and “Honk to end gun violence,” we hit the streets, heading towards Cutting Blvd.

The signs we held suffered in the rain, but the enthusiasm and perseverance of the group persisted.

“I almost thought that maybe I wouldn’t come out to walk tonight because of the rain,” said Jane Eisenstark, a Richmond resident. “But then I realized that it was that much more important that I do.”

Throughout the trek the group chanted, “Ceasefire: Alive and Free,” and despite the poor visibility, drivers passing by honked in support.

We reconvened at the initial meeting point at the end of the walk, drenched from the rain. The gathering closed with a prayer and some words from Jones about taking the work to the next level outside of walking. The goal, he said, is getting at risk youth help through any means.

I left feeling overcome with emotion. I thought about peers who had been lost too soon and how senseless these deaths always are. Gun violence does not occur everywhere. We do not need it. It is hurting our community.

I also felt intense gratitude for the people who walk weekly, as well as those who are involved in the fight against violence in other ways. It is clear that these people have unconditional love for their community. Any of them would help if someone who needed it reached out.