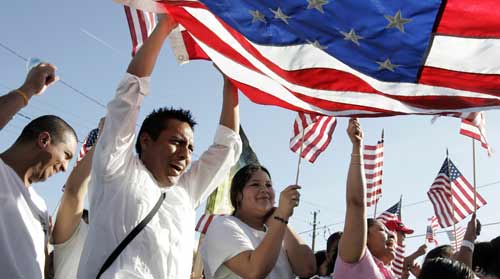 Posted at 17:29h in Immigration by RPadmin 0 Comments

A federal judge this week blocked Obama’s executive actions from going into effect, a move immigration reform advocates are calling only a “temporary setback.”

Texas U.S. District Judge Andrew Hanen issued a temporary injunction on Monday, siding with Texas and 25 other states that signed on to a lawsuit against Obama’s executive actions on immigration. The White House announced on Tuesday that the Department of Justice is appealing the decision.

The judge’s ruling was released just two days before the expanded version of Deferred Action for Childhood Arrivals (DACA) was slated to go into effect.

It means that — until the ruling is blocked or overturned by a higher court — individuals will not be able to apply for the new programs announced by President Obama on Nov. 20, 2014. These include the expanded version of DACA, which was slated to start Wednesday, and the new program for parents of U.S. citizens or legal permanent residents, called Deferred Action for Parents of Americans (DAPA), which was expected to start in May.

Together the programs could protect over 5 million undocumented immigrants from deportation and provide them with temporary work authorization.

Monday’s ruling does not affect so-called Dreamers, who can still apply for (and renew) DACA under the program that was announced in 2012.

The federal lawsuit in Texas is the latest move in a broader political chess match now being played out between Republicans and Democrats over the president’s recent steps on immigration reform.

Since Obama’s announcement in November, Republicans have attempted to block his initiatives in Congress. But the legislation has not gotten passed the Senate (and even if it did, it would be vetoed by the president).

That left one pathway for the GOP to challenge Obama’s executive actions: through the courts.

“As they did in the health care fight, when they were unable to block the Affordable Care Act’s implementation through legislation, Republicans have turned to the courts to resolve what really amounts to a political dispute over policy,” Marshall Fitz, vice president of immigration policy at the Center for American Progress, told reporters on a national press call hosted Tuesday by New America Media.

“Make no mistake,” said Fitz. “This is a partisan political attack disguised as a lawsuit.”

The plaintiffs “sought this judge out” because, Fitz said, he has “a history of highly antagonistic, over-reaching, really extremist, anti-immigrant decisions.”

“They went judge shopping, they found their judge, they got the decision they wanted,” said Frank Sharry, executive director of America’s Voice, in Washington, D.C. “But reading through the decision, it is poorly argued, [rests on a] very weak basis, and it is clearly a politicized decision that is not going to survive appeals up through the court system.”

The case is expected to go next to the 5th Circuit Court of Appeals, a three-judge panel known for its conservative bent. After that, the case would go to a full U.S. court of appeals and even potentially all the way to the Supreme Court.

“The wheels of justice are slow,” said Fitz, “but at the end of the track, we will have confirmed legality and the program will be implemented.”

Immigration advocates have several reasons to be confident.

“The fact is that the Obama administration has an airtight legal case,” said Sharry. “Every president since President Eisenhower in the 1950s has used executive authority in the area of immigration policy to do similar things.”

“We have the law on our side, legal precedent, historical precedent,” said Sharry, “and when a judge makes a decision in the future — hopefully in the coming days or weeks — based on the law, we are confident that expanded DACA and DAPA will be able to go into effect.”

The real danger is fear

Immigration reform advocates say they are confident that the judge’s decision will be reversed. Far more worrisome, they said, is the fear that it could generate among immigrant communities in the meantime.

“Part of the Republican strategy here is to introduce elements of uncertainty and controversy around this program in hopes that when it does go into effect, fewer people will sign up,” said Sharry of America’s Voice.

He cautioned immigrant communities “not to fall for this.”

Some immigrants are hesitant to apply for a program that is temporary, he said, because they are afraid that their information might be used to deport them if the program were ever overturned. But Sharry said these fears are overblown. “In my 30 years of working on immigration policy,” he said, “I’ve never seen a temporary program taken away in a way that subjects people who’ve come forward to deportation.”

What you can do now

Although they can’t apply for the new programs yet, undocumented immigrants can start getting their documents together.

“We really want to emphasize the message to immigrants, their friends and families, to not despair, that everyone should continue to prepare, that people can get ready to apply for the programs as soon as this block is lifted,” said Shiu-Ming Cheer, immigration attorney at National Immigration Law Center based in Los Angeles.

Cheer encouraged immigrants to continue to save money (the application fee for DACA and DAPA will be $465) and gather evidence that they have been in the country for the last five years. This includes proof of identity (such as a passport or matricula consular), proof of living here (such as bills, bank statements and medical records) and their criminal and immigration histories.

Most importantly, Cheer said, undocumented immigrants should seek help from qualified attorneys at trusted local community organizations, not from notarios or unauthorized practitioners.

“If you’re eligible for the new DACA or DAPA, both of those programs are on hold. There is no way to apply right now,” warned Sharry, “so don’t be fooled by scam artists promising to get you to the front of the line.”