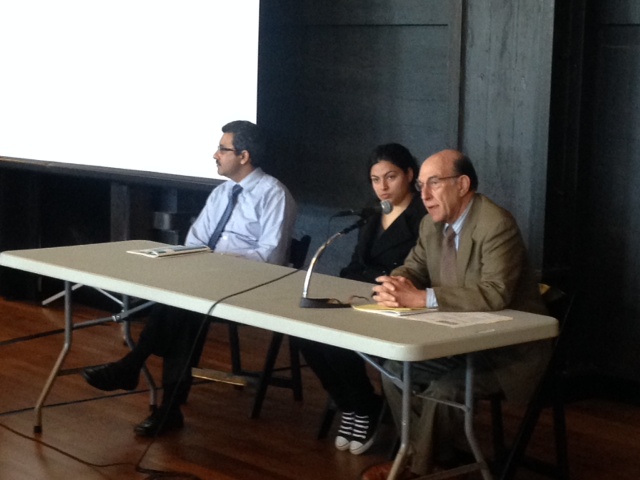 09 Mar Study: Gentrification Isn’t in Full Force in Richmond Yet – But It’s a Real Threat

Posted at 09:04h in Economy, Neighborhoods by RPadmin 0 Comments

As concerns about affordable housing and gentrification grow in Richmond, a new study finds that it may not be too late to prevent residents from being displaced.

The study, by UC Berkeley’s Haas Institute for a Fair and Inclusive Society, was released Feb. 20 at a housing summit at the East Bay Center for Performing Arts. It found that the city is in the early stages of gentrification – and it may still be early enough to prevent further displacement.

“What is important for residents to understand is that the conventional model for development in the Bay Area has led to substantial displacement of low-income communities, and in particular African-American communities. Richmond is showing some of the signs that this is happening here,” said Eli Moore, program manager with Haas Institute, and co-author of the study. He presented the findings to about 60 community members, organizers, researchers and policymakers at a housing summit organized by UC Berkeley’s Haas Institute and supported by The California Endowment.

One of the most alarming findings was that Richmond’s African-American population dropped by 35 percent between 2000 and 2013. As Bay Area housing prices continue to climb, even more residents are in danger of being pushed out.

“Gentrification isn’t in full force in Richmond yet, but it’s real threat,” said Samir Gambhir, a researcher with the Haas Institute and co-author of the study.

But the study concluded that it still could be possible to turn things around. If local policymakers move fast to implement anti-displacement policies, they can help Richmond residents stay in their homes and avoid further displacement.

In order to do this, the communities affected need to be fully involved in the creation of these policies – and they need to know the history that created these conditions, said Richard Rothstein, a research associate of the Economic Policy Institute and senior fellow at UC Berkeley Law School.

“We have the general belief in this country that African-American ghettos in this country, black concentrations of populations in places like Richmond, happened by accident,” said Rothstein.

“The reality is that the segregation of the black community in Richmond, and in every metropolitan area in this country, was the result of the City of Richmond, the State of California and policies of the federal government,” he said. “They were not the unintended consequences of policies that somehow adversely affected black people. They were deliberate, they were purposeful, they were written into regulation in this country. And we’ve forgotten the history entirely in this country.”

Richmond’s population boomed during World War II, when there was more public housing here than any other place in the country.

“It was segregated,” explained Rothstein. “Most of the housing was for white workers only. The housing made for black workers were close to the plants and railroad tracks, close to the refinery. These were segregated housing projects built by the federal government with cooperation with the Richmond Housing Authority. Two standards of housing, one for white one for black workers, completely separate.”

Rothstein stressed that unless we reacquaint ourselves with this history it will be difficult to create a real solution.

“It’s especially important right now that we’re getting back into an era, I hope, where housing will be produced, where we’re going to have an increasing supply that is going to come to the community,” said Richmond City Manager Bill Lindsay. “Certainly there is an interest on the part of the City Council with making sure that housing is something that’s affordable in Richmond.”

With cuts to redevelopment funding, Lindsay said this fee is “going to be a very important piece of how we finance our affordable housing units in addition to whatever sources we can get through state programs.”

“There is a pattern of the early phases of gentrification in Richmond, which may be creating pressure that pushes vulnerable residents out of the city,” said Moore. “This is of concern to all who aspire to create opportunity and health that is inclusive of all.”