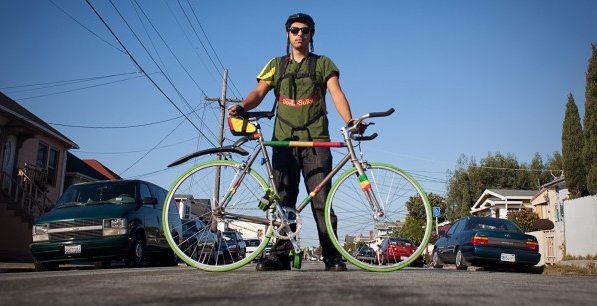 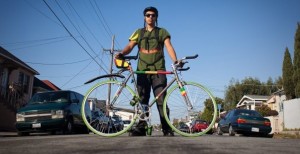 “When was the last time you were you in jail?”

A young white police officer asked me this question after he pulled me over while I rode my bike in Pinole, CA, close to Richmond, where I live. It was Feb. 20, and I had just left the China House restaurant. If you know me, you know I ride my bike everywhere, all over the bay. It’s my main mode of transportation.

This seemed to make the officer anxious. When I asked why he stopped me, he answered: “You look unsafe.” Not unsafe, as in I might hurt myself bicycling; but unsafe, as in, to somebody else. I know this, because the next thing he asked was: “Why are you in Pinole?”

I told him I had been eating at a restaurant.

“I’m not saying you’re doing anything wrong, you just look unsafe,” he repeated. He wouldn’t explain what that meant, but instead asked for my identification — which he then ran through his computer.

After a few minutes, when nothing came back on me, he warned: “I will be watching out for you the next time you come into Pinole.”

Then he let me go.

I biked home as fast as I could. I didn’t know how to feel about being called “unsafe” — I was confused about what he was implying. I felt less than a person at that moment, like it was all about the color of my skin and my age. I was racially profiled, a young brown male with a rasta-colored bike.

When I got home, I posted my experience on social media. I wanted an outlet for how I felt. Here is a bit of what I wrote:

“It really sucks that just because I’m young and brown that some people will always think I’m doing something wrong.”

Within a few hours, more than 60 people weighed in on my experience, many giving tips on how to get this officer fired or asking for his name and badge number so they could do it themselves. (I refused to give out his details.) To my surprise, a former Richmond city councilman even shared my post in the popular RealRich group on Facebook, tagging city council members and local police.

But, after reading all the comments from friends and people who I didn’t even know, I felt disappointed and sad. Nothing anyone said seemed like a long-term solution, and most of it was just more hate.

It stayed on my mind all night and the whole next day, and I had no idea what to do about it. But at that point I did feel like something had to be done.

So, the next day, I rode my bike back into Pinole. I looked for the officer near the street where he pulled me over. I had decided to have a conversation with him to see if we could find some common ground. Maybe I could open his eyes to what he had done.

As I looked for him, I felt scared, like every cop in the area watched me as they drove past. When I finally found him, he seemed upset and defensive — I think he thought I wanted to pick a fight — but I told him I just wanted to talk.

We spoke for about 20 minutes. I told him how I felt about what happened, and what I saw as an abuse of power. We agreed that nobody’s perfect, and that we can’t push all the world’s problems onto any one group. He also apologized, said he’d work on being better, and that he’d try not to do it again.

That felt good. But part of me still feels as if nothing will change in people like that. I don’t feel any different about police as a whole, but I do worry now about other officers who find out that I posted my story online — because it seems there will always be someone who could become upset and take things into their own hands.