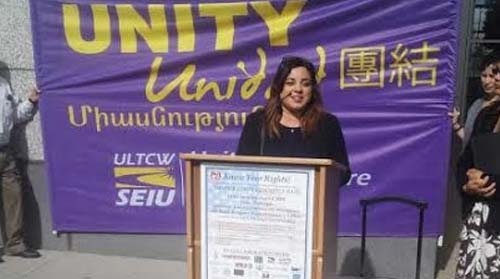 Posted at 13:14h in Immigration by RPadmin 0 Comments

OAKLAND – Putri Siti is on track to graduate from UC Berkeley this year. But as an undocumented student, there was a time not long ago when her future was much less certain.

“When others were worrying about what major to choose and which class to take, I had to worry about where my parents and I could stay in the United States. When others were nervous about their transfer applications, I received my deportation date,” says Siti.

Originally from Indonesia, she came to the United States with her family as a child. She was facing possible deportation when she found out she could qualify for Deferred Action for Childhood Arrivals (DACA), a federal program implemented in 2012 that allows certain undocumented immigrants who came to the United States as children to receive temporary relief from deportation, as well as work permits.

After qualifying for DACA, Siti was able to travel to Indonesia last summer to visit her ill grandmother under a special permit given to DACA beneficiaries. But her father, who is also undocumented, couldn’t see his mother before she died. “He had to go through the pain while watching his mother’s funeral through Skype, a video call. This is why I continue to fight, ” Siti says.

Although over 600,000 undocumented young people have enrolled in the DACA program, many who are eligible have still not applied for the program and continue to live in fear.

Siti joined East Bay leaders and community groups at a press conference here last week promoting a free immigration resource fair on April 4 to inform undocumented individuals of programs they may qualify for, like DACA and driver’s licenses.

“We hope undocumented immigrants come out of the shadows and get to know that they are eligible for a fearless life,” said Emily Park, a community health specialist from Asian Health Services in Oakland.

President Obama’s executive action on immigration, announced last November, would expand the DACA program by removing the age cap (applicants currently have to be under the age of 31), and would create another program called Deferred Action for Parents of Americans and Lawful Permanent Residents (DAPA), which would provide deportation relief to parents who have children who are citizens or have green cards.

The action was temporarily blocked by a federal judge in Texas. The U.S. Department of Justice is appealing the ruling and a hearing is scheduled for April 17.

But, eligible immigrants can still apply for or renew their DACA status under the original 2012 DACA program, and advocates are urging families to be ready to apply for the DAPA program as well as the expanded DACA program.

Another undocumented student, Denize Sanchez, spoke along with Siti. Sanchez is also a DACA beneficiary and now works as a youth educator at La Familia Counseling Service in Hayward.

When Sanchez was a child, she did not understand what her immigration status meant. She just knew that she was not supposed to tell anybody, for fear that she would be separated from her family.

It wasn’t until her senior year of high school, when she and her peers were filling out college applications, that she learned what it meant to be undocumented.

“When the application asked us for a Social Security number, I felt too embarrassed to ask, so I just sat there quietly, pretending like I was filling out the application. And I waited until everyone left so that I could ask my counselor what I should put there if I didn’t have one,” she said.

“But in 2012, when President Obama announced DACA, it kind of changed my life for the better,” she said. She qualified for the program and was able to get a work permit, and now she is educating other young people on becoming leaders in their communities.

The Immigration Resource Fair will be on Saturday, April 4, from 10AM to 6PM, at the East Bay Community Foundation (200 Frank H. Ogawa Plaza in Oakland). There will be legal resources specializing in the DACA/DAPA process, a health insurance benefits intake, and information on applying for driver’s licenses.