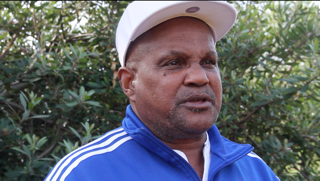 10 Apr Black Families on Front Lines of Displacement in Richmond

Richmond resident J.C. Farr, 72, remembers the days black families populated his neighborhood in Richmond’s Southside. Walking through Booker T. Anderson Park, Farr points to a house where a black family used to live. It was sold, gutted and flipped by another owner, he says.

This traditionally black neighborhood is changing as more Latino, Asian and white families move in. There is more diversity, Farr says, but he’s worried that with the way things are going, South Richmond will no longer be familiar to him.

Richmond’s black population dropped by a striking 35 percent between 2000 and 2013.

A study released in February by UC Berkeley’s Haas Institute for a Fair and Inclusive Society found that the black population of Richmond fell from 35,300 in 2000 to 22,800 in 2013. During the same period, the Latino population nearly doubled to 42,600, while the Asian and Pacific Islander population grew from 12,500 to 15,800.

The study found that Richmond is in the early stages of gentrification, as neighborhoods in the Iron Triangle, North and East, North Richmond, the Richmond Annex and Southside are seeing housing prices rise. These are the same neighborhoods that have seen a decline in the black population.

However, the study did not explore why black families are leaving Richmond.

“The Census data only tells you where people are at, specifically at the time. It doesn’t tell you where they moved to or why they moved,” explains Eli Moore, researcher and one of the authors of the study.

In order to identify the reasons for the decline, Moore says the city and community of Richmond need to engage in a serious effort – either through community forums, workshops or funding more research — to find out whether the black population is leaving Richmond for greater opportunities or if they are leaving because of pressures they face in the city.

Anne Omura, director and attorney of the Eviction Defense Center, says 100 percent of her clients who are evicted from their homes in Richmond are low-income black and Latino residents.

A housing rights attorney for over 20 years, Omura says the same pattern she saw in Oakland, particularly the displacement of low-income black households, is about to intensify in Richmond.

“It’s deja vu from the late ‘90s during the dot-com boom, when all of a sudden we went from regular clients to a grandmother walking in with a 30-day notice when they have lived 40 years in the home,” says Omura. “We are seeing the exact same ingredients in Richmond. All low-income folks being evicted from Richmond are African American and are being priced out largely because there is no rent control there.”

Unlike some other Bay Area cities – including San Francisco, Oakland, Berkeley, Hayward, Fremont, East Palo Alto and San Jose – Richmond does not have rent control.

Nearly half of Richmond’s residents are renters, many of them low-income. According to the Haas Institute study, nearly 49 percent of Richmond households are renter occupied. That figure is as high as 80 percent in North Richmond, central and south Richmond. Among renters, more than one-third (37 percent, or about 6,740 households) earn less than $35,000 annually and spend more than 30 percent of their income on housing.

According to Omura, this leaves low-income renters, including many black families, more vulnerable.

“With a large working class base, why is Richmond behind other major cities? Why isn’t there rent control? They have those protections; why don’t we? Its about fairness, and the fundamental right that you shouldn’t just be able to lose your home,” says Omura. “Richmond would be on top of my list [in establishing rent control].”

‘There is no affordable housing in Richmond’

Stephanie Hervey, 42, a single mother of two teenagers and former North Richmond resident, was evicted from her home in May 2014. She and her children have been homeless and staying with friends until they can find housing in Richmond.

“For two bedrooms, there is no affordable housing in Richmond that we can find, that does not have a one year waiting list,” says Hervey. “And these are in not the best neighborhoods.”

Beginning in January 2014, Hervey was in dispute with her landlord for what she claimed were poor and unsafe housing conditions. She said the landlord did not fix home utilities and let pit bulls run into her space. Hervey was evicted by the Richmond Superior Court after a second hearing when, according to the judge, Hervey didn’t pay her complete rent.

Hervey says in order to find a home in Richmond, she and her family will have to share with other people. Yet her biggest challenge has been finding potential housemates who have good credit.

“It could be that I’m not looking in the right places,” says Hervey.

‘Once poor people are evicted, it’s really hard to stay’

Melvin Willis, community organizer at the Richmond chapter of Alliance of Californians for Community Empowerment (ACCE), sees a need for a just cause eviction ordinance and a rent control policy in Richmond.

“With things changing in Richmond, crime going down, new business in the market, it makes it seem that Richmond is thriving. Yet as rent goes up significantly, we have not seen an increase in living wages, which unintentionally forces people out,” says Willis.

“We want to work together and make sure we have rent control and just cause eviction so vulnerable tenants are not displaced, and so landlords are not allowed to jack up the rent as much as they want,” he says.

In January 2013, the Richmond City Council debated stricter just cause eviction protections, and establishing rent stabilization and a rent control board. According to a report by Richmond Confidential, the City Council did not vote on these, opting instead to allow the Planning Division to take all of 2013 to research eviction and demographic data, and the cost of maintaining a rent control board.

On Feb. 17 of this year, the City Council passed a motion for city staff to convene a working group to bring the Council clear policy recommendations or a draft ordinance. According to City Council minutes, the motion directs staff to “establish a Just Cause requirement for evictions and consider the use of a Rent Board or a smaller Tenant Protection Commission.” The staff has until mid-May to give their recommendations.

But for Mayor Tom Butt, rent control addresses the symptoms, not the root cause of the problem.

“I think it’s a solution that sounds really simple to people but by and large it doesn’t work,” said Mayor Butt in a phone interview. “I don’t think a day goes by that you don’t read about the housing crisis in San Francisco and Oakland and Berkeley.”

“Rent control and just cause ordinances just scare the hell out of housing developers,” he said. “It could turn around and bite Richmond.”

Meanwhile, Omura of the Eviction Defense Center says that whether the City Council passes an ordinance, residents organize a ballot measure, or the city pursues other methods, Richmond has to act now.

“In Oakland, we failed the first time to place [rent control] on the ballot, but succeeded the second time. But that only stopped the bleeding,” she says. “So much damage had been done, entire neighborhoods wiped out. Once poor people are evicted, it’s really hard to stay.”

For Hervey, who has been homeless for a year now, the future remains uncertain.

“I want to stay in Richmond,” Hervey says, “because Richmond is really about change. I have established roots here and I don’t want to throw it all away.”