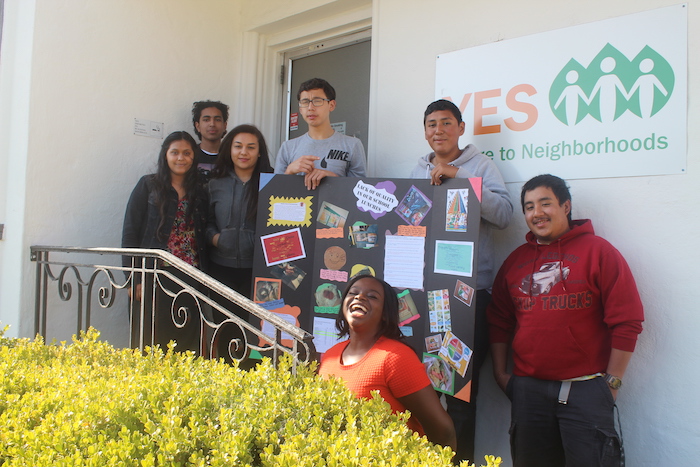 08 May What Are Students Eating? A Teen Research Team Looks To Find Out

Posted at 04:01h in Education, Youth by Pulse Editor 0 Comments

A team of high school students from across the West Contra Costa Unified School District is asking: “What are we eating?”

Teens from the nonprofit group YES Nature To Neighborhoods have conducted a research project into the nutrition of meals served in the district’s 11 high schools.

Gustavo Chavez, a sophomore at De Anza High School and member of the organization’s “youth engagement team”, said many of his peers don’t prefer the school meals, a view that inspired the eight-student team to get involved.

“A lot of people really dislike them, so we tried to figure out what’s inside of them and how can we change them to make them better,” said Chavez.

According to Chavez, this push to improve lunches reflects the connection between nutrition and academic performance.

“We want better quality school lunches, so that kids aren’t going through their day without nutrition, so that they can perform better,” he said.

According to Director of Food Services, Barbara Jellison, over 3.3 million lunches were served to students throughout WCCUSD during the 2013-2014 school year. With an impact this great, the Richmond Food Policy Council — which works to ensure that the local food system reflects the needs of the community — described the district’s cafeteria system as “the biggest restaurant in the county”.

Students, however, say the restaurant doesn’t please its patrons.

Most kids don’t eat school lunches,” said Gillian Linsy, a senior at Pinole Valley High School and fellow member of the Youth Participatory Action Research project, an annual program at YES that focuses on wellness in the Richmond community. “They would rather bring something from home or not eat at all.”

The project intends to address this disconnect.

“The ultimate goal is to raise awareness and put pressure on the administration to continue to work towards healthy lunch for all the students,” said Adam Smith, assistant youth coordinator for the team.

For their research, students used pictures of lunches to create a photo-voice presentation. They also interviewed Jellison, as well as cafeteria staff throughout the district about the process of making lunches.

The students, however, said the staff couldn’t answer some of their questions.

“Sometimes they wouldn’t even know,” said Chavez. “Not even the cafeteria members know how the food is made.”

The students also researched the nutrition of the food served each week — and discovered that they couldn’t find the information online.

Likewise, the district’s limited financial resources surprised researchers the most. According to their findings, schools have $3 per student for a lunch — but half of that goes to labor.

Team members continue to compile their findings, and plan to share them with the local food council as part of its campaign for healthy school food.

Claire Zurlo, youth coordinator at the resource center, said last year’s project gave students the opportunity to reach out beyond their small campus.

“It was helpful for them to do something that impacted the rest of the district,” she said.

Linsy confirmed that students are happy to make a difference.

“I think that just getting our voices heard is big, and hopefully [we’re] making a change,” she said.