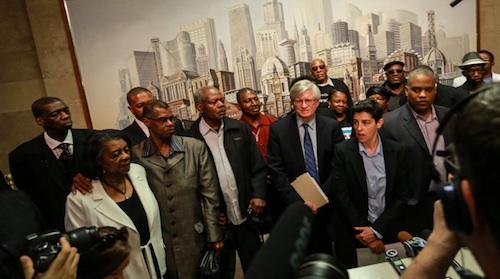 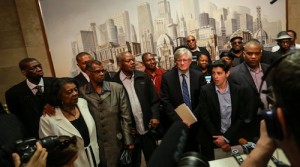 Over a period of nearly 20 years, Chicago Police Cmdr. Jon Burge and his “midnight crew” allegedly tortured at least 119 people, forcing them to make confessions.

The police officers beat the victims, burned them with lit cigarettes and handcuffed them to hot radiators. They tied plastic bags over their heads and nearly suffocated them. They put cattle prods on their genitals and in their mouths and electrocuted them.

The officers’ behavior, human rights experts say, is what one would expect in a dictatorship, not a democracy.

On Wednesday, the City Council approved an ordinance to compensate Burge’s victims, most of them African-American men, and their families. The reparations ordinance is the first of its kind in the country to address police abuse. The measure draws from the United Nations Convention against Torture and human rights practices around the world, especially in nations that overcame the legacy of violent, repressive regimes.

“There have been so many examples of torture regimes coming to an end — in Chile, El Salvador, South Africa — where some kind of compensation and support for community and individuals and healing has been developed,” said Susan R. Gzesh, a lecturer at the University of Chicago who designed a class that examines the Burge case in an international human rights framework. “The ordinance puts Chicago up there.”

The city will pay eligible survivors from a special fund, offer psychological counseling, create a public monument and teach Chicago Public Schools students about what has been called “an ugly chapter” in the city’s history.

Before the vote, Ald. Joe Moreno (1st), who co-sponsored the ordinance, thanked Mayor Rahm Emanuel for moving forward with the measure “when others preceding you did not even want to acknowledge it.”

The council chambers were packed, and torture survivors had a strong presence in the room. One of Burge’s victims, Gregory Banks, burst into tears as Moreno spoke.

Emanuel said of the reparations ordinance, “This is another step, but an essential step toward righting a wrong.”

In the United States, the idea of reparations is old, from calls in the 19th century to compensate African-Americans for slavery to government payments to Japanese-Americans for stripping them of their property and sending them to internment camps during World War II.

But the global human rights movement, from which the local ordinance draws, was born in the aftermath of World War II and efforts to force Germany to redress the atrocities against Jewish people during the Holocaust. Since then, reparations, and the related concept of reconciliation, have been implemented around the globe in many forms.

In Chile, the government gave pensions and health care to people who were tortured by the former military regime from 1973 to 1990. In South Africa, the Truth and Reconciliation Commission documented violence from the apartheid era, in part, to help create a shared narrative of the nation’s racist past and build a multiracial democracy.

Supporters of Chicago’s ordinance say the systemic police violence against African-Americans is similar to that experienced by survivors of military and police abuse around the world.

Joey Mogul, an attorney at the People’s Law Office and author of the ordinance, said critics of systematically racist violence in this country limit themselves when they only consider the civil rights aspect.

“We should, in fact, call them international human rights violations,” she said. “So we can put it on the world stage and compare it to other atrocities elsewhere, because they are equivalent.”

The reparations ordinance is the result of months of negotiations between representatives of the city, the People’s Law Office, Amnesty International, USA, and Chicago Torture Justice Memorials, a coalition of lawyers, activists, artists and educators that has been pushing for reparations for torture survivors for years.

Under the ordinance, survivors of torture will be paid from a $5.5 million city fund. Individual payments will be capped at $100,000. People whose right to sue has expired under the statute of limitations and who had accepted settlements from the city smaller than $100,000 are eligible to receive money from the fund. Survivors who accept payment must agree to waive their claims against the city.

Stephen Patton, chief lawyer for the city, said an arbitrator will determine who is eligible. People’s Law Office will present the arbitrator with a list of torture survivors and supporting documentation.

In addition to money, the city will provide a free education for survivors and their families at City Colleges of Chicago.

The Department of Justice determined that Burge and detectives under his command systematically tortured more than 100 black men and women on the predominantly black South and West sides from 1972 to 1991. Burge, who joined the Police Department in 1970, was fired in 1993 after a department investigation tied him to torture.

However, neither Burge nor the officers under his command has faced criminal charges for torturing a civilian. In 2011, Burge was sentenced to 4 ½ years in federal prison for lying about his knowledge of the torture, but he was able to keep his monthly city pension. He completed his sentence earlier this year and lives in Florida.

Some survivors at City Hall on Wednesday thought the reparations fund should be bigger considering how much money the city spent on behalf of alleged torturers.

The city has spent more than $20 million in private legal fees defending Burge and others implicated in the torture scandal. And it has paid out about $64 million in settlements related to civil cases, according to the People’s Law Office.

Cook County has spent about $11 million to pay prosecutors, private lawyers and settlements.

To date, 16 torture survivors have been exonerated, according to Mogul, and about 25 are behind bars for wrongful convictions. Twenty of them have yet to present new evidence in court that might corroborate accusations that they were forced into false confessions.

Tears streamed down Will Porch’s face after the ordinance passed. Porch, 60, said that in September 1979 Burge and another officer beat him with a .44 Magnum pistol, emptied the revolver of all but one bullet, and then forced him to play a one-sided game of Russian Roulette.

The 14 years he spent in prison just added to his torment, as did the fact that many people doubted his tale of torture at the hands of police, Porch said.

“It hurt not to be believed. It really did,” he said. “God turned some hearts around because I never believed that people would actually come together, believe us, move on it and take action. This is incredible.”

The money for survivors is far less than the original $20 million sought by supporters. But there is perhaps something more valuable than money.

A key aspect of reparations is public recognition of past wrongs. In South Africa, the individual testimonies at the Truth and Reconciliation Commission, whose hearings were broadcast across the country, laid bare many of the human rights abuses of the apartheid era. In Chicago, it is not just what Burge and company did, said Mogul, but that the city let their actions continue for so long.

The state’s attorney prosecuted scores of torture survivors based on false confessions, and judges sent them to jail on the strength of tainted cases. The scandal “implicated the entire system,” Mogul said. “For years people didn’t want to address the Burge torture cases; they wanted to sweep it under the rug, and even today, Burge in his latest statements seems to say the means justified the end.”

And for years, survivors of torture demanded an apology from former Mayor Richard M. Daley, who served two terms as state’s attorney and then mayor while the alleged torture happened. In September 2013, Mayor Rahm Emanuel issued the apology on behalf of the city they had waited for.

Gzesh said Daley had to step down before there could be justice in the torture case.

“I don’t think, despite community pressure, organizing and activism, that we were going to get a solution to these cases until Daley was out of the picture,” said Gzesh, who is the executive director of the Pozen Family Center for Human Rights.

In 2006, when Daley was still mayor, Mogul and a coalition of advocates presented the Burge case to a U.N. committee in Geneva. At the time, the United States was already on the U.N.’s radar because of torture allegations by detainees at Abu Ghraib prison in Iraq and Guantanamo Bay.

The U.N. committee called on the U.S. government to bring the perpetrators in the Burge case to justice.

“It was a really validating moment for us,” Mogul said. “I think it helped spur us along to get Burge prosecuted and convicted, but also it helped us in terms of the reparations struggle.”

Mogul said some people in the movement began to compare the torture to lynchings in the South, because Burge and his men intimidated and terrorized whole communities. She said that’s when the coalition started to look at reparations as a framework.

The idea was not unprecedented. In 1951, African-American activists presented the United Nations with “We Charge Genocide,” a historic petition that called on the world body to examine lynchings and other violence against blacks. The United Nations declined to hear the petition.

Mogul and the group started with the aim of incorporating aspects of the U.N. Convention against Torture, such as financial compensation for torture victims. They also looked at reparations measures in Chile, where there is a “museum of memory,” so the nation won’t forget the violence under the dictatorship of Gen. Augusto Pinochet.

“We can start using this [ordinance] as a model across the country,” Mogul said in an interview before the vote. “And also start saying to the federal government — it’s not just cities and municipalities that should recognize human rights violations and pay for these reparations services or make these apologies — but the feds should start pitching in as well.”

Adeshina is a reporter for The Chicago Reporter. Email him at aemmanuel@chicagoreporter.com.