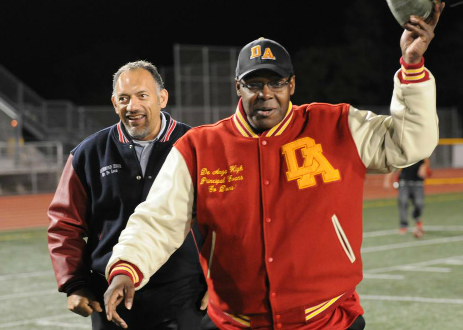 Posted at 01:22h in Education, People by RPadmin 0 Comments

EDITOR’S NOTE: Richmond’s De Anza High School recently received a Gold Ribbon Schools Award from the California Department of Education. The award recognizes schools that have made gains implementing the academic content and performance standards adopted by the State Board of Education.

According to the West Contra Costa Unified School District website, De Anza has seen significant improvement in several key indicators in recent years, including a nearly 5 percent increase in its graduation rate and a nearly 10 percent reduction in its dropout rate.

Richmond Pulse interviewed De Anza principal Robert Evans at a recent school board meeting where he and members of his staff were honored for the achievement. Evans says teaching remains his first love. He arrived at De Anza five years ago to “give back to the Bay Area community and try to help raise kids the proper way.”

Richmond Pulse: What is the most important thing you brought to De Anza?

Robert Evans: The biggest thing we lacked was developing relationships. My philosophy is once you’ve built relationships, then we collaborate to have communication. I don’t care how smart a kid is, I don’t care how difficult a parent is; once you break down the walls and develop trust, everybody can work together to collaborate and you come out successful, because then you develop into [a] community as a team.

RP: How do you define success?

RE: We talk about teaching the full student. It’s got to be academics, obviously; but you have social skills, athletic skills, you’ve got to find out — whether it be music skills, visual performing arts — what drives a kid, each kid. That means you’ve got to get personal, to understand what drives each child and what those strengths are, their passions. Why do they want to come to school? You have to give children a reason to want to come to school every day, so [that] it’s exciting. When we did that, we saw our attendance rate go up. The kids want to be there.

With teachers, my philosophy is to point them [to] their passion — because if it’s their passion, it’s not work for them. All I do is just kind of corral them and point them in the right direction and let them go.

RP: What has changed the most on campus?

RP: So many teachers and administrators burn out over time. Where do you get your passion from?

RE: It’s just been very exciting for me. I just go 100 miles an hour, whether it’s in the morning or late at night. We do a lot of things at football games, basketball games, soccer games — you try to be at all of those different types of things. Then you’ve got to focus on them in the classroom as well. You look at every single kid and say, “Which way do they learn? What’s their learning modality?” Then you have to take an array of teaching strategies and match those things.

It’s the same thing with my staff. I look for staff that that have excitement. You’ve got to be motivated. I tell teachers all the time it’s like being on stage: You’ve got to go 100 percent all the time, because you’re “on”. It takes a lot of energy, a lot of strength — but whatever it takes, you’ve got to do that.

RP: You are now moving on to work in the district office. What’s next for you?

RE: Since I just officially got a new promotion into the district office, my role now is to help move the [entire] secondary program of West Contra Costa in the same direction that we took De Anza. I’m going to be the coordinator of educational services in the secondary schools.

RP: Is it bittersweet to leave De Anza?

RE: Yeah, it is. When you’ve had a family that you’ve really been excited for, you don’t like leaving. But at the same time, it’s an opportunity to help more of the district. It was like when I left teaching: I was a teacher, and then I became an assistant principal to help the school overall. So now [it’s] just a larger role, and I can help more people.