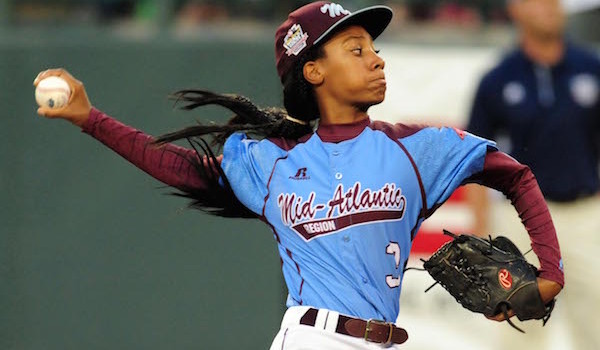 26 May For Female Athletes, Double Standards Start at an Early Age

Posted at 04:18h in Sports, Women, Youth by RPadmin 0 Comments

When 13-year-old female baseball player Mo’ne Davis was publicly slut-shamed on Twitter earlier this year, thousands rallied to her defense. The incident highlighted the longstanding tradition in this country of hyper-sexualizing female athletes.

Female athletes are judged by their appearance far more than male athletes and are often subjected to public scrutiny based on their looks or “sexual behavior.”

For instance, Mokgadi Caster Semenya, a South African Olympic distance runner and world champion, had to undergo sex testing because she didn’t conform to the stereotypical feminine image. She eventually fought back and won her case, arguing on the basis of protecting her medical privacy. She nevertheless had to wait a year before being able to compete again as a woman.

A recent cover of Sports Illustrated featured University of Kentucky basketball player Karl-Anthony Towns shooting a lay-up. The picture highlighted his strength and agility. Compare that to lists like “The Top 50 Hottest Female Athletes Of All Time” or “The Sexiest Female Athletes of 2014.”

When these strong and successful women aren’t in bikinis, their dating and personal lives become main topics. WNBA player Candace Parker’s 2009 pregnancy cover on ESPN magazine is a prime example. Instead of including her skills on the court, the cover shows her in a white dress while pregnant.

That kind of double standard isn’t limited to professional athletes but starts as early as high school.

When I played girls’ tennis, I felt uncomfortable because our uniform consisted of a short skirt. I never understood why I had to wear a skirt when the boys’ team wore long shorts. I always wore shorts to games, even though my coach would reprimand me for not wearing the appropriate uniform.

But when I played in co-ed badminton, my coach let us choose our uniforms. I could wear long shorts or shorter ones based on how comfortable they were to me. My teammates didn’t care that I was wearing shorts that were too long or that I wasn’t wearing a skirt. We were all treated equally.

Having played a co-ed sport, I never felt put down because I was a girl. At the end of the day, I want to be seen for my strength on the court, not how I look on or off of it.

I’m not sure what will eradicate sexism, especially in sports, but I do believe the reason Davis was so graceful with her response to Twitter-shaming was due somewhat to playing on a co-ed team. She knows her worth and didn’t need to bring anyone down to make herself look better. She let her strength in the sport do all the talking.

VoiceWaves asked several high school athletes in Long Beach to share their thoughts on the hyper-sexualization of female athletes:

Bottreypich Chap, 17: I played two sports in high school: co-ed badminton and all-girls tennis. In badminton, the boys and the girls wore the same t-shirts and bottoms were based on student preference. In tennis, we were required to wear a tank top and athletic skirt, which was quite different from the boy’s tennis teams. I didn’t comfortable in my tennis uniform. The fact that I had to prance around in a micro skirt made me constantly conscious of the skin on display, which didn’t exactly help my confidence during matches. “Pull down your skirt more,” or “your bra strap is showing” were constantly thrown around. I felt as if I had to up my attitude level a bit, to show people that I may be wearing this “girly” uniform, but I wasn’t someone to be toyed with, and that being “girly” wasn’t a bad thing. This “girly girl” could still serve a mean smash. In badminton I didn’t feel anyone’s stares; it was just me, the birdy, and my opponent. I was in it to win it, and I never felt self-conscious. There wasn’t an urge to prove anything to anyone, other than myself.

Sulma Solis, 17: If people care too much about how we female athletes look then it takes away the whole meaning of female athlete. People should expect us to get dirty and to look sporty instead of having the idea that just because we’re females we have to be dolled up as if we were going to a party instead of a game. Being a female athlete can add a bit of pressure because people, including your coaches, expect more of you because they want you to prove people wrong.

Sarah Rodriguez, 17: For me the double standard is definitely an added pressure … to play harder. The criticism can be difficult emotionally. Nevertheless it empowers me to keep doing the sport I love.