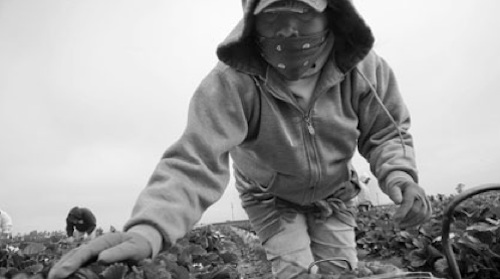 Posted at 00:49h in Immigration by RPadmin 0 Comments 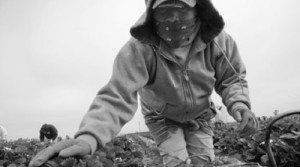 Editor”s note: In this last installment in a three part series on California farmworkers by NAM contributor, David Bacon, an undocumented Triqui Indian farmworker in Greenfield, Ca., speaks of poverty and health problems as the result of long hours working in the fields. Her story, as told to Bacon, helps contextualize the struggles of many farmworkers in California who are working at a time of the drought and dwindling jobs availabilities, and without health care.
I’m Triqui, from Rio Venado in Oaxaca. I’ve been here 7 years, working in the fields all the time. Right now I’m picking peas. Other times in the year I work in the broccoli.

The worst part about working in the peas is that you have to work on your knees. After a day on your knees they hurt a lot, and when you stop it’s hard to extend your leg. It hurts, even when they give you a break for 15 minutes every two hours. I don’t take pills for the pain, but I know many people who do.

Sometimes your knees break down. That’s happened to a lot of people. Their knees go out permanently and they can’t work anymore.

Another problem is the dust, which has chemicals in it. Until two years ago they didn’t give you glasses to keep the dust out. Now they do, but by now most people who work in the peas have problems with their eyes.

I have a family I have to support. There are six of us — myself and my husband, and our four children. These wages aren’t enough. We live in an apartment and have to pay rent, electricity and food. The little they pay us doesn’t cover it.

It’s a disaster if anyone gets sick because we don’t have any insurance. If it’s not really bad we don’t go to the doctor. But if it’s really serious we have to, and then we end up owing a lot of money. We’re just now recovering from the last time we had to do this. We had to take one of the kids and didn’t have the money to pay.

Normally we get six months every year when we can work all the time. Other times work is hard to find. A paycheck for a week is $300, or even $100. When the work is good we try to save a little for the times when work slows down.

The majority of the people in my crew are Triqui. There are also Mixtecos, and people who speak Spanish. Almost everyone is indigenous.

The Triqui people don’t agree with the low wages. We want a salary that our work deserves. The boss now says they have a water crisis, but I really think he says this to intimidate us. When we complain about the wages they tell us, “If you want to work, there’s the work, and if you don’t, so what?” What can we do?

If people get together and demand more, I think things could change. But instead we stay quiet. Many of my coworkers are afraid they’ll lose their jobs.

I heard about what was happening in San Quintin on Facebook [when thousands of indigenous Triqui and Mixtec farm workers went on strike in Baja California this spring]. I worked down there for a number of years, picking tomatoes. They paid really low there. I think what they did there was really good. They tried to do something for themselves.

We agree with what they did. We come from the same towns. We’re brothers. We are the same community. We are indigenous people, and we have to do whatever we can to keep our children eating, no matter what they pay. But if we don’t work and harvest the crops, there’s nothing for the growers either.

We are thinking of doing something like they did in San Quintin. What we demand from the growers is that they recognize that just as we work for them they should work for us. Things should be more equal between us.

I’m going to keep working in the fields, because I have no other work. But I don’t want my children to work in the fields. We’re doing it so that our children can leave the fields and move forward. I want to give them a better life.


See part I and II here:

Thousands of Farmworkers in California Can’t Make a Living

Triqui Farmworkers Struggle to Survive and Organize in California