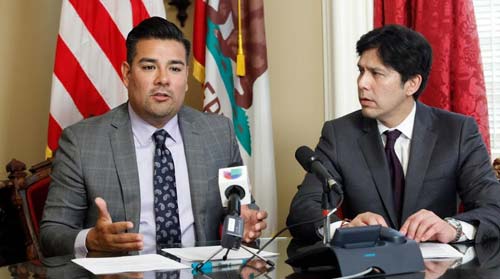 19 Jun Undocumented Kids to Get Health Coverage in State Budget

Posted at 21:19h in Health, Immigration, Youth by RPadmin 0 Comments 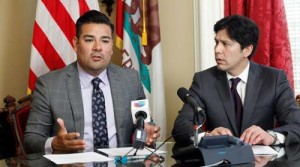 Calling it one of the “best” budgets the state has ever had, California Gov. Jerry Brown said the $167.6 billion dollar budget the legislature passed Tuesday would pump more money into child care and education, pay down the state’s debt by $1.9 billion and provide health care for its undocumented children.

“This is just one step and we need to do more,” Brown said during a press conference, referring to the $40 million budgetary allocation for providing health insurance to an estimated 170,000 undocumented children in the state  through Medi-Cal – California’s name for Medicaid, the health insurance program for low-income people.

A jubilant Sen. Ricardo Lara, D-Bell Gardens, called the $40 million allocation a “modest investment in health care that will be transformational in the lives of not only children,” but also their families and the community as a whole.

He noted that the budget deal “affirms our commitment to embrace and integrate our immigrant community, to lead where the federal government has failed and to acknowledge the hard work and sacrifice of a community that contributes billions of dollars” to the state’s economy.

Lara’s own Health for All bill (SB 4) will provide health insurance for all Californians regardless of their immigration status. It is now before the Assembly, after it cleared the Senate last month. If it is signed into law, California would be the first state in the country to provide state-funded health insurance to its undocumented residents.

According to researchers at the University of California at Berkeley and University of California in Los Angeles, expanding Medi-Cal to undocumented California residents, under Lara’s bill,  would  have cost the state between $353 and $369 million annually, representing a 2 percent increase from what it currently spends. But now that the state has approved $40 million in its budget to provide insurance for its undocumented children, the Medi-Cal cost in Lara’s bill will go down.

“It would also provide the momentum for SB 4 to move forward,” Wright said.

Senate President Pro Tem Kevin de Leon, who participated alongside the governor in the press conference and had backed SB 4 since it was introduced in the Senate late last year, said Washington’s inaction has caused “financial consequences throughout the country.”

Lara’s bill, he said, will send a “very strong message” to lawmakers in Washington who have “dithered” on immigration reform.

The governor’s remark that more needs to be done, including how to address the low Medi-Cal reimbursement rates – among the lowest in the nation — will be discussed in a special session in a few weeks.

Brown said that his office would be hiring an immigration coordinator to assist youth who have been granted temporary relief from deportation under President Obama’s executive action of 2012. One million more California residents could become eligible for deportation relief if the federal courts allow Obama’s 2014 executive action to move forward.