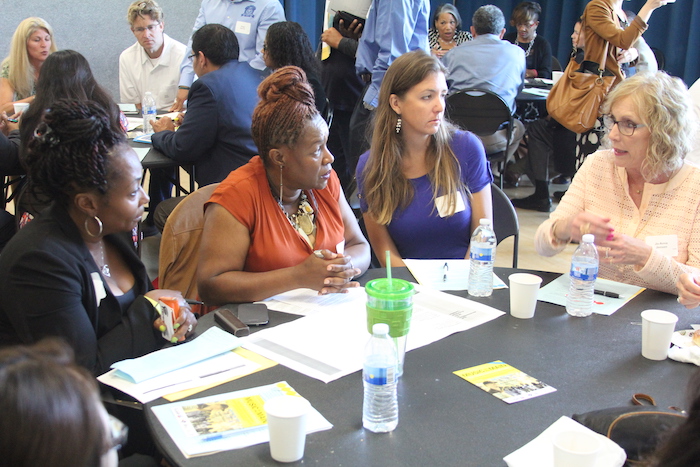 Just as the city of Berkeley developed around the University of California, Berkeley, the planned Berkeley Global Campus at Richmond Bay is expected to be an enormous economic development opportunity for Richmond. But what can be done to ensure that it benefits the city’s small businesses? That was the question at the center of a breakfast meeting in August at the Richmond Civic Center, where about 75 local business leaders filled the room.

The breakfast, sponsored by Healthy Richmond and Richmond Main Street Initiative, in cooperation with UC Berkeley, invited local businesses to discuss how businesses can prepare for opportunities and growth from the new campus. The breakfast also provided a chance to hear from locals on what the Berkeley Global Campus could do to support Richmond businesses.

“There’s going to be a lot of money invested,” said Roxanne Carrillo Garza, Healthy Richmond hub manager. “We’re interested in making sure that business owners themselves had a chance to weigh in on what they need to really be successful and be able to compete for procurement opportunities.”

The Berkeley Global Campus at Richmond Bay is slated to be the largest economic development to come to Richmond since the shipyards of World War II. It will be built at the Richmond Field Station, a site on the waterfront just off the Regatta Boulevard exit of Interstate 580 that has sweeping views the San Francisco skyline. The development will span 152 acres, about three-quarters the size of UC Berkeley’s main campus.

According to the recent “Anchor Richmond” report by the Haas Institute for a Fair and Inclusive Society, the campus will likely become the largest employer in Richmond within a decade. By the year 2040, it’s projected to be at full capacity with a daily average of 10,000 workers, faculty, students and visitors.

A report by UC Berkeley’s Haas School of Business estimates that construction costs could range between $520 million and $900 million. The “Anchor Richmond” report estimates that 2,700 jobs will be generated in the first phase (2014-2018) of construction.

How local businesses can prepare

Some groups are already working to give small businesses the tools they need to compete for campus contracts.

Among the attendees were representatives from small business development programs that offer local businesses training and technical assistance to help them compete for UC Berkeley procurement.

This fall, the city of Richmond is also launching the Richmond Build Contractors Resource Center, a new contractors’ capacity building center to help small, local contractors compete for jobs on large-scale public construction projects. According to the chancellor’s office, UC Berkeley plans to partner with the center.

Draft recommendations also include calling on UC Berkeley to set a specific goal for increasing procurement from Richmond businesses, partner with Richmond programs that build the capacity of local businesses to compete, and regularly address policies that may create barriers for small businesses to access these opportunities.

At the breakfast, Gerstein said she was energized by the amount of excitement and interest she heard from attendees.

“Part of the challenge,” said Gerstein, “is for us to work through the policies and the regulations and requirements that we have with the State of California and the federal government to able to use local businesses the best way possible.”

But some fear that Richmond’s local residents and businesses could be left out of the prosperity that the global campus will bring.

What happens in Richmond should benefit Richmond

Over a year ago, a coalition of concerned community members formed a group called Raise Up Richmond to make sure the campus is a win‑win for both UC and Richmond. They’ve sought to get UC Berkeley’s commitment to a Community Benefits Agreement that could include guaranteeing local hiring, a housing displacement fund, affordable housing and the protection of longtime residents from displacement.

Earlier this year, UC Berkeley Chancellor Nicholas Dirks committed to entering into a Community Benefits Agreement but what concessions, if any, that agreement will contain is still being determined.

“The stakes are very high for the people of Richmond,” said Todd Stenhouse, spokesperson for Local 3299 of the American Federation of State, County and Municipal Employees. “Whether it’s making sure there are good jobs in the community or making sure people aren’t displaced from their homes or making sure that small businesses have a chance to share in any prosperity that is connected to the project. Absent a CBA, there are no such guarantees that the project will realize its promise.”

Catahoula Coffee owner Timothy Manhart, who attended the breakfast, says he’s seen Richmond grow since he first opened his neighborhood coffee shop on San Pablo Avenue. He says he may not see a huge uptick in his business from the campus but is interested in the impact the campus will have on the overall Richmond community.

“When the housing collapsed, that’s when I started my business at Catahoula. Seeing all the turbulence that hit, what I saw as a benefit were young professionals who started seeking out Richmond,” he said. “That’s what I think will really help out the overall status of Richmond, just being the last affordable place that’s commutable distance to San Francisco to live.”

Carrillo Garza of Healthy Richmond said the business breakfast provided attendees with information on opportunities they didn’t know about.

For Salvador Moreno, who works at Pro Sound on 23rd Street doing car stereo and alarm installations, the breakfast was the first time he had heard about the planned UC Berkeley campus coming to Richmond. He said he came to the event in search of information about training to better serve his customers.

“Some trainings and connections with partners would help us most,” he said. “Training on how to use the Internet more. I’m just starting to learn it and now it comes with the new systems in the new cars so I need to learn a bit more to do better.”

Richmond resident Charlene Chabural, who works for local general contractor Overaa Construction, came to the event to network with other local business professionals.

“We’ve been following the story on the Richmond Global Campus and it’s something we’re very excited about,” said Chabural. “We know that it’s going to open up a lot of opportunities for our line of work and also for our subcontractors.”