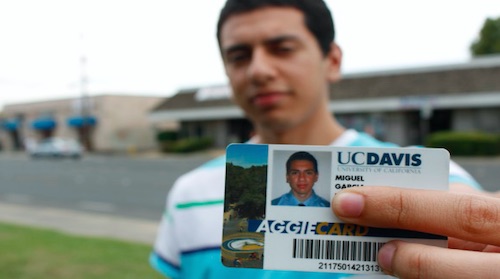 19 Aug How a Dreamer Fell Through The Cracks

Posted at 01:26h in Education, Immigration by RPadmin 0 Comments 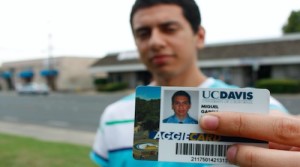 If someone asked me what the proudest moment of my life has been, without a doubt I’d say the moment I received an acceptance letter from UC Davis. I vividly recall sprinting to the garage to tell my parents the big news. Two years later, I found myself back home in Merced, deep in student debt and without a degree, reflecting on where it all went wrong.

I was born in Mexico and came to this country when I was two years old. I am part of the generation known as Dreamers, undocumented students who were brought to this country by their parents at a young age. As I got closer to graduating high school, I was very aware that I would not be able to get financial aid and that my options for paying for higher education were very limited.

I was a good student at Golden Valley High School in Merced and received high grades in most of my classes, graduating with a 3.8 cumulative GPA. My worry was not as much that I wouldn’t get accepted to college, but that I wouldn’t be able to pay for it. My parents told me not to worry and just apply. A few teachers and counselors assured me that there are always opportunities. Thanks to the passage of the Dream Act in 2011, I could now receive financial aid.

But I found myself caught in a grey area. I got accepted into UC Davis in the fall of 2012 but the Dream Act, which allowed me to receive state financial aid, did not go into effect until January 2013. This meant I had to pay a quarter’s worth of studies out of my own pocket.

I applied for scholarship after scholarship and wrote essay after essay. It was an effort that took up a lot of my time, but it was worth it because I won enough local scholarships to pay for the complete tuition for the first quarter.

Everything at UC Davis started out well: I met new people, maintained decent grades, and was generally positive about the new experience of college. However, unbeknownst to me, my personal foundation began to crack during my first quarter and it was only a matter of time until the problems that were piled up spilled over.

I didn’t take into account the cost of living in Davis and had only enough money to pay for my tuition. I had to start relying on my parents for food and rent, knowing very well that my dad, a low-income construction laborer, already had to care for my three younger siblings. Knowing that I was spending money that my family needed weighed down on my shoulders but I tried to ignore it.

An added stressor was choosing a major. At first I wanted to study English, then neuroscience, and then something else and so on. Different majors kept grabbing my attention and I took courses I later regretted.

I was in social isolation as well. I made some superficial friendships but nothing real. I considered joining clubs to get out of my comfort zone but never committed to it, always telling myself that I should focus on what I was there to do––pass my classes.

By the second quarter, the stress began to take a toll. I was finally receiving financial aid, which helped, but my personal expenses still remained an issue. Rent checks began to bounce and despite my father’s attempts to reassure me that we would solve the problem, I could not help but worry. My grades started to suffer in some classes and it made me more negative, beginning a cycle of isolation and stress. I was often triggered by the fear of failure and loneliness.

I isolated myself even further. Leaving my apartment felt like a chore and all I wanted to do was remain within the sanctuary of my home. This mentality was self-destructive and earned me a meeting at the probation office because my grades had put me in academic risk.

When I entered the counselor’s office, I shared all my troubles with her and confessed to being on the brink of depression. She asked if I felt better and I said yes. She made me sign a form that said we had discussed this and told me that if I ever felt the same way again, I should go seek more counseling at student health services. It felt great to share my struggle with someone and I left feeling like I was ready to handle my business.

My third quarter started and I was trying my best to recover academically. Somewhere down the road, I cracked. My grades declined sharply. I started skipping some classes and I completely isolated myself from everyone. I’m not sure what made me slip, but once I slipped I never got back up.

My mother noticed I started calling less and less, but I assured her that everything was ok. It may be because of the culture I grew up in, but I never felt comfortable to share my personal problems. I’ve always kept those to myself and that remained true in those months.

I was in denial about my situation– I sometimes considered seeking help like the probation counselor had recommended, but I never went through with it. I think it was because of the stigma I felt around depression. My grades were at an all time low and I decided to drop out.

After the quarter was over, I had to tell my parents what happened. It wasn’t easy but my silence could not continue. Their reaction was supportive, but I could still feel the disappointment lying under the surface. I wanted them to shout, but they didn’t. They were good listeners and it was probably the most honest conversation I’ve ever had with them. I told them all the problems that I had until then kept to myself. It was a vulnerable moment that I needed in order to start my road to recovery

The UC Davis administration informed that I had to return my financial aid for that last spring quarter because of my academic performance. I owed them about $3000 that I did not have. Until I pay them back, my registration remains on hold and I cannot attend a UC school.

I feel responsible and I’m committed to paying my debt in full. I decided to move back to Merced and attend community college until I saved enough to pay back my debt and could return to a UC. However, finding a job in Merced that will work with a college schedule is difficult and my debt weighs down on me constantly.

I was initially cynical about attending community college, thinking I was downgrading from UC Davis, but it’s been a great experience so far. Rather than remain in solitude, I made the decision to join Movimento Estudiantil Chicano de Aztlan upon enrolling, a club that focuses on empowering Chicanos known as MEChA, and I have benefited greatly from it. My self-esteem has slowly climbed back up and my grades have improved as well.

I’ve decided to study economics and I want to use that to do something to help poor working class families, like mine. After one year, I became the president of the MEChA and I also joined student government. I want to use this momentum to land me back on track and continue my studies at a UC.

I now admit that I was naïve when I was at Davis. I was young, which is a strange thing to say considering that I’m only three years older now. I didn’t realize the weight I was carrying or how much it would wear me down. I felt pressured and feared failure above everything. I was afraid of not being able to afford college and was afraid of being alone.

I feel like more regular sessions with the academic counselor or some other kind of support would have helped me stay grounded in the long run. A one-time visit provided relief momentarily but looking back, I can see now how that just wasn’t enough for me.

Now that I’m back in Merced, I have been challenging myself to leave my comfort zone and I feel that I have matured a lot over these past couple of years. Being at home with the moral support of family and friends has made this easier for me.

Being smart isn’t the only ingredient for college success. Having enough financial aid isn’t the only factor either. Succeeding in college, like in any other part of life, relies on the right combination of many ingredients. And one of those ingredients is knowing when to reach out for help–so you don’t slip through the cracks, as I did.