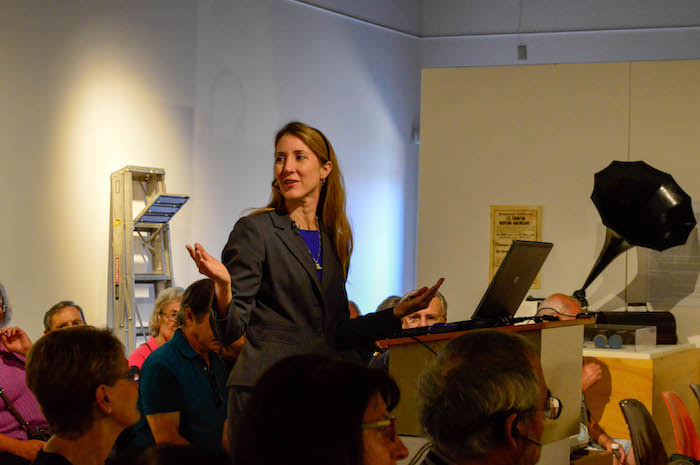 Posted at 22:50h in Arts and Culture, History by RPadmin 0 Comments

Above: Historian Laura Ackley speaks at the Richmond Museum of History.

It’s been a century since Richmond was honored at a world’s fair in San Francisco, and 110 years since the city was incorporated on August 7, 1905.

To celebrate the combined anniversaries — and the opening of a new permanent exhibit recognizing the fair — the Richmond Museum of History held a special event this year that included musical performances, a lecture and featured architectural historian Laura Ackley, an expert on the Panama-Pacific International Exposition — the fair that first honored the city — and author of “San Francisco’s Jewel City: the Panama-Pacific International Exposition.”

The PPIE was primarily a celebration of the opening of the Panama Canal. But, for businessmen and city officials, it was also a way to help San Francisco recover after the devastating 1906 earthquake. The fair opened on February 1915, and hosted 19 million attendees throughout its ten-month duration.

On August 7, 1915, around 3,000 Richmond residents ferried to San Francisco for Richmond Day, an event to commemorate the 10-year anniversary of the city’s incorporation. Among the crowd, were children who were let out of school for the day to see the parade, and sing the Star Spangled Banner at the Liberty Bell, which was “visiting” the city for the occasion.

In addition to celebration and fun, many hoped the fair would bring more people and investments to the Bay Area. There were guidebooks on hand and trips given around the region, including to parts of East Bay.

And according to some experts, it worked.

“The exposition did a lot for the city of San Francisco,” said Evelyn Santos, a museum technician. “Back in the day, expositions were a big deal. People went to learn about the latest craze including technology, public transportation and fashion.”

After discovering a trove of items related to the fair in inventory, Richmond museum staff decided to open a PPIE related exhibit to commemorate the 100th anniversary. The exhibit is in the permanent gallery.

“[The exposition] helped recognize us,” Santos said. “The city was fairly new, and by ten years, Richmond had grown exponentially. It was a cool way to say, ‘We are here and representing our city.’”

Over 80,000 exhibiters with over a million objects, not including the art galleries, showed off their wares at the fair. Some of these, which Ackley describes as treasures, can be found in Richmond’s exhibit. Attendees will find glass jewels, ribbons, pins, fabric, postcards and other souvenirs.

For Santos, the PPIE exhibit brings to life people during that time. “It reminds me of an amusement park and how exciting it must have been to be there,” said Santos.

Richmond’s history museum is open Wednesday through Friday from 1 to 4 pm. Admission is a dollar for students and free for children under 12.

Those interested can also visit California Historical Society and HistoryPin’s online exhibit, Mapping San Francisco’s 1915 World’s Fair. Other remnants of the fair can be found around the Bay Area.